Doctor on the Bayou

There was a time, other than The Waltons and Little House on the Prairie, that doctors made house calls. A time before waiting rooms and diagnostic centers and ten minute speed-treating, when doctors traveled to homes in the middle of the night, held their patient’s hand, and worried alongside panicked relatives.

There was also a time before insurance, before emergency rooms and HMO’s, a time when doctors accepted not only modest payment, but also chickens and vegetables and home-cooked meals. 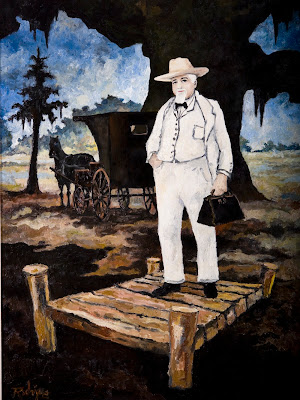 George Rodrigue painted Doctor on the Bayou in the early 1980s from his mother’s recollection of early twentieth century New Iberia, Louisiana. In the 1920s these doctors made house calls from a horse and buggy, attending to everything from the common cold to childbirth to major ailments and injuries.

They more likely traded their services for goods rather than money, and their dedication established them as folkloric and cultural heroes in the bayou country. 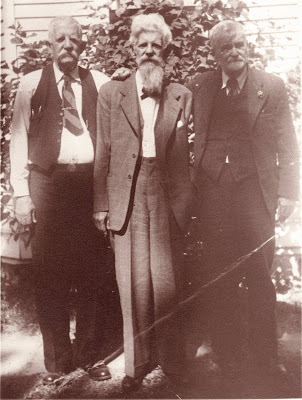 For his painting, just as with his original Jolie Blonde of 1974, George created his subject from his imagination. So imagine his shock when Lawrence Pugh, a good friend and a long-time member of the New Orleans Gallery staff, brought him several photographs of his great grandfather, a country doctor from Napoleonville, Louisiana with a remarkable likeness to the doctor in the painting.

According to Lawrence, his great-grandfather was a miracle child, plucked from the floodwaters at age three by a slave during the Last Island hurricane of 1856.* Saved by an unnamed hero, he became a hero himself, the only coroner for many miles, living to age ninety-eight, and awarded by the community on the occasion of his fiftieth wedding anniversary with a brand new car, a Ford Model T. 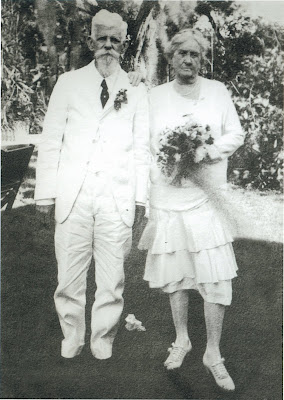 Like the distinguished Dr. Pugh, George’s Doctor on the Bayou knows local respect, reflected in his solitary, yet approachable and confident stance, prepared with his doctor’s bag for a house visit. In the painting, he stands not in shadow, but all in white, glowing like a ghost and framed within the dark oak tree, locked into Louisiana as an inseparable part of its culture. He stands on a dock where he could just as easily step onto a road as a river, reminding us that the Bayou Teche and the Mississippi River also transported these early physicians. 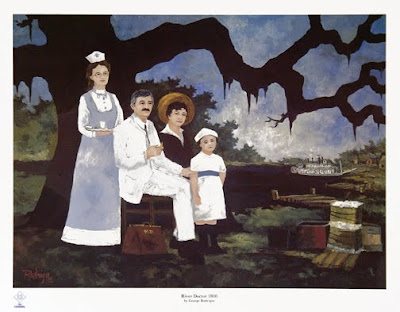 For the painting River Doctor 1800 (above), commissioned along with the two paintings below by a Baton Rouge Hospital in the mid 1980s, Rodrigue researched old Louisiana medical photographs. The doctor with his nurse and family rode the riverboat (visible in the distance) to small villages, caring for the people that lived along the river. 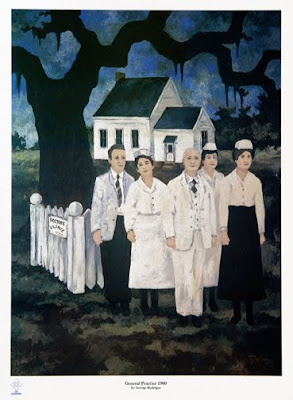 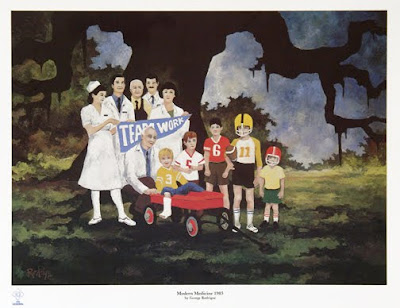 In the painting Modern Medicine (above), George compares the teamwork put forth by today’s Louisiana health care workers to that of a kids’ football team, including his sons, André (yellow helmet) and Jacques (red helmet). In the mid-1980s he found himself like most young fathers at his kids’ sporting events, and it was an easy connection for him to relate the team work of a hospital staff to the team spirit of a child’s football team.

Finally, I leave you with one last photo of a pensive Dr. Pugh, along with a quote from “Two Ways of Seeing a River” by his contemporary (and look-a-like) Mark Twain, who weighs in with an observant, if not depressing, look at the challenges, heroism, and controversy surrounding the medical profession of his day:

“No, the romance and the beauty were all gone from the river. All the value any feature of it had for me now was the amount of usefulness it could furnish toward compassing the safe piloting of a steamboat. Since those days, I have pitied doctors from my heart. What does the lovely flush in a beauty’s cheek mean to a doctor but a ‘break’ that ripples above some deadly disease? Are not all her visible charms sown thick with what are to him the signs and symbols of hidden decay? Does he ever see her beauty at all, or doesn’t he simply view her professionally, and comment upon her unwholesome condition all to himself? And doesn’t he sometimes wonder whether he has gained most or lost most by learning his trade?” (1883) 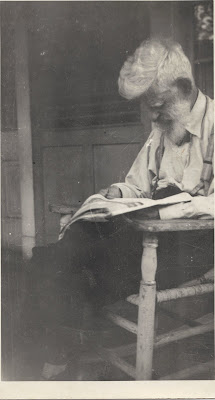 George Rodrigue recently produced a fine art silkscreen of his original Doctor on the Bayou. For information contact Rodrigue Studio.

Coming this weekend: "Spirits in the Trees"

Posted by Wendy Rodrigue Magnus at 9:03 AM