We took a short trip to New York this week as we met with publishers and celebrated the launch of Deb Shriver’s elegant tribute to New Orleans, Stealing Magnolias. With only a few hours to explore the city, I found myself once again with my museum pal Emer*, this time at the Morgan Library.

Far from the contemporary abstract art I hoped to see at the Museum of Modern Art (which was closed), we encountered Edgar Degas’s drawings, a classical and familiar art history nook for us both.

We all know Degas’s ballerinas and horses, and those of us in New Orleans especially are familiar with the cotton exchange, which he painted during his visit here in 1873. 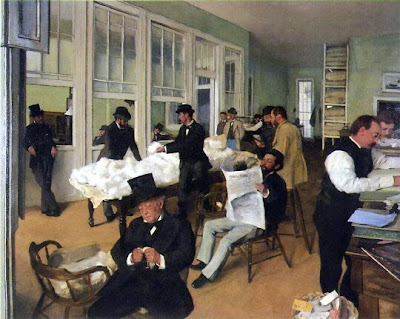 However, I was surprised to see in his sketches studies of the old masters, especially Michelangelo, the same drawings that inspired and indeed educated George Rodrigue as an art student. Both artists copied the old masters to understand the human figure.

(pictured, a Rodrigue sketch from 1965; for more images and history see the post “The Nude Figure”) 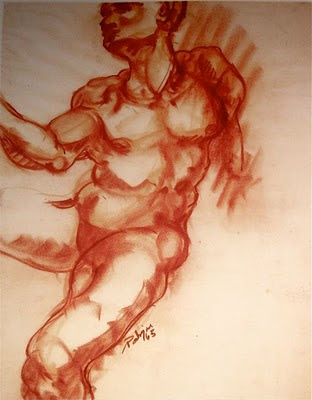 In addition, like Rodrigue, Degas (1834-1917) rarely took commissions, preferring his own passionate direction over the dictated instructions of someone else.

This independence lead him to experiment with various mediums, including print-making. After last week’s visit with artist Woody Gwyn in Galisteo, New Mexico, I did not expect our impromptu discussion of monotypes to pay off so quickly. However, as Gwyn explained, it was Degas who embraced this medium with enthusiasm, adding paint to his prints and creating a form of mixed media. In the piece below, for example, he embellished (in 1885) with pastel a lithograph he originally printed in 1877. 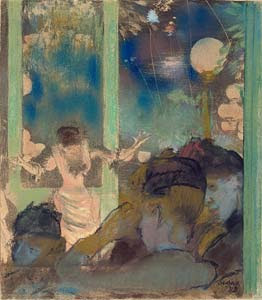 This reminded me in turn of George’s mixed medias. He paints on silkscreens, occasionally revisiting and reworking prints from years back, exchanging his easel and palette for the fun of garage walls and paint-from-the-can. 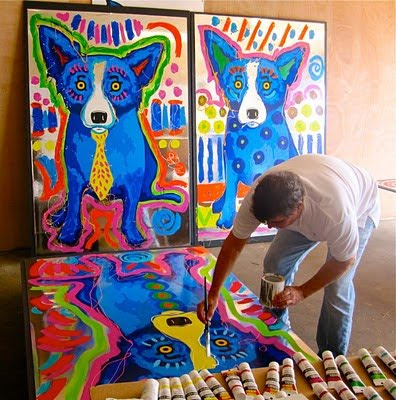 Furthermore, I couldn’t help but draw a connection between Degas’s ballerinas and Rodrigue's Blue Dog, and their effects on each artist's career. After years of painting, both artists achieved fame when the public embraced their new subjects. 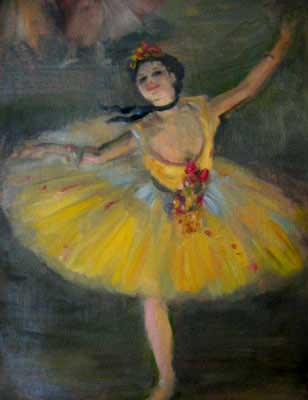 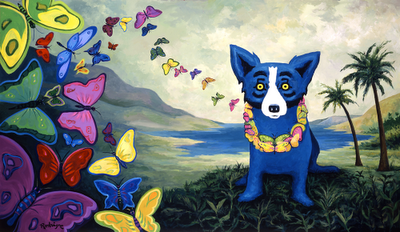 As with an earlier post on Picasso*(who was an avid collector of Degas’s monotypes and mixed medias), I do not presume to connect the styles of Rodrigue and Degas. However, there are certain similarities regarding their interests and artistic development that did cross my mind as I viewed the Morgan’s collection.

Following the Degas drawings, Emer encouraged me to view the Roy Lichtenstein exhibition across the hall, specifically his black-and-white drawings of 1961-1968 (the same years George attended art school in Lafayette and Los Angeles).

It’s ironic that my passion for George’s paintings does not spill over to Pop Art in general. I’ve seen lots of this style over the years and studied most if not all of the relevant artists. However, in all honesty I’m far more excited about the ballerinas. Maybe Lichtenstein himself unwittingly described the reason when he said of his own work,

“The passionless style is my passion.”

Despite the fact that it included five times the number of pieces, Emer and I blew through the show much faster than the Degas exhibition. There’s not a lot to study, not much to say beyond the overall clever and (certainly at the time) innovative concept. 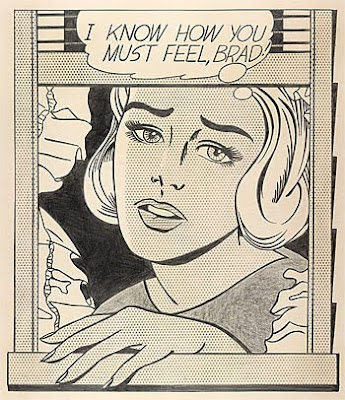 Lichtenstein used both stencils and common household window screens to create his dot patterns. I find this form of ‘cheating’ intriguing, even refreshing, especially since he also copied his images from cartoons and advertisements he found in newspapers. According to the artist, he appreciated cartoons for their

“startling quality of visual shorthand and their sense of cliché.” 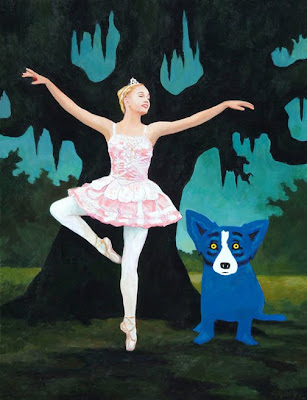 Hey, I like cliché too! And this candor, the willingness of Lichtenstein to admit his insensitivity and “sort of mindless drawing,” ironically renewed my interest … and my passion.

*Emer introduced me to the Morgan several years ago, when an installation of Chopin original scores interspersed with small Delacroix canvases and passages from George Sand left me swooning. For a related post see “The Muse”

*for a Met Museum adventure with Emer, see the post “Miniatures and Manuscripts”

pictured above, a Rodrigue canvas, one of those 'rare commissions,' 2009

coming next week: “Doctor on the Bayou”