I’ve spent a lot of time lately looking back. George does this often within his art, and it is an obvious and running theme in his Cajun paintings. However, even the Blue Dog, which he frequently describes as ‘commenting on life today,’ allows an occasional glimpse into a bygone world, a place that remains inside of him and helps to ground that complex person, George Rodrigue.

(pictured, Looking Back, oil on canvas from 1992, featuring Evangeline) 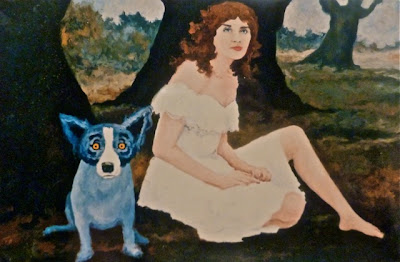 Yet in some ways our entire city seems set in the past these days (or maybe it always was), even as we move forward with a new mayor, a Super Bowl-winning football team, and a recent boom of construction and tourism and energy. 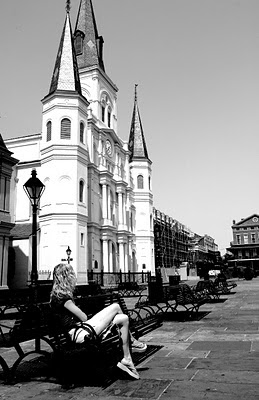 At the Odyssey Ball this past weekend we kicked off a one-year celebration of the one hundredth anniversary of what I like to call our city’s ‘Met.’ The exhibition, titled Great Collectors Great Donors: The Making of the New Orleans Museum of Art, 1910-2010, celebrates those collectors that have helped shape the museum into a great institution, even beyond its impressive construction. 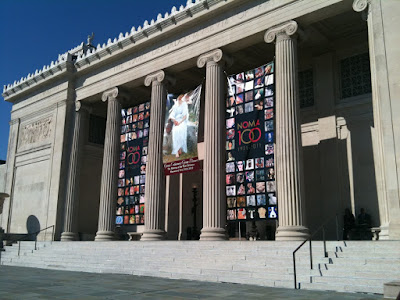 Beginning with eleven works when the doors opened in 1911, NOMA (once known as the Delgado Museum of Art) now boasts more than 35,000 items in its collection, many of them classic pieces within the decorative arts, African and South American objects, and fine works from the French Impressionists, Italian Renaissance painters, and of course the modern masters.

(pictured, At the Delgado, a 2008 original silkscreen by George Rodrigue, commemorating the museum's Rodrigue retrospective) 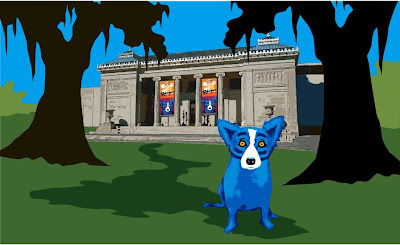 “The Staffords had formed a collection which was like a mini-museum, covering practically the entire history of Western art from ancient Egypt and Greece to twentieth-century modern masters, as well as the arts of Africa, Asia, and Oceania. The breadth of the Stafford Collection gave the Delgado’s trustees, staff, and patrons an idea of a possible future for the Museum --- to aspire to present the broad scope and diversity of world art.”

(for a fascinating time capsule in video, a 1966 tour of "Odyssey of an Art Collector," featuring Mimi Stafford at the New Orleans Museum of Art, visit here)

Further embracing this sentimental mood, I visited Mignon Faget: A Life in Art and Design at the Historic New Orleans Collection, on display in the French Quarter through January 2, 2011. Like many New Orleans ladies, I have a prized collection of her jewelry designs, including the gold and silver bows worn by my grandmother and the banana leaves, in all shapes and sizes, worn by my mother (who happens to share the jeweler's name).

(pictured, my grandmother Helen McClanahan and my mother Mignon McClanahan Wolfe, at a rig christening in Harvey, Louisiana, circa 1960) 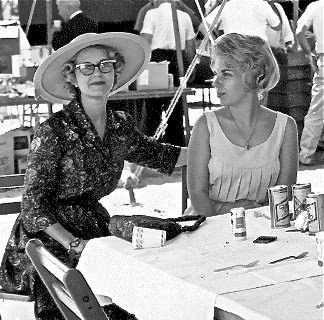 Recently, in his own nostalgic spirit, George surprised me with a large moonsnail choker by Mignon Faget, now one of my favorite pieces, and dating back to the early 1970s. 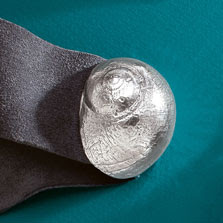 He says the jewelry reminds him of his own early creativity and images of women, even paintings from high school, such as this canvas from 1960, formed entirely from his imagination. 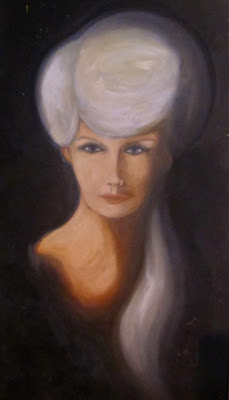 Further transporting me this week was our yearly celebration of my mother’s brother Jack McClanahan, a real character* who enjoys sharing stories of the 1950s-1970s, his golden era of New Orleans. He talks about rig christenings, Bacchus rides, and parties with Fats Domino as though they happened last night. As his special guest this year he invited his old friend Bubba Spell so that he might ‘regale us with stories of Papa Mac.’

(Felix 'Mac' McClanahan, my grandfather, pictured center at his oil rig on the Harvey Canal, 1960s) 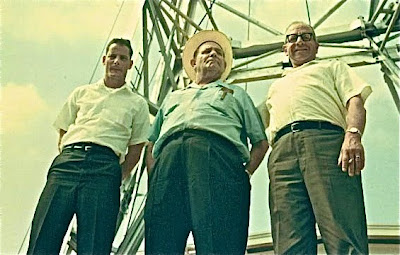 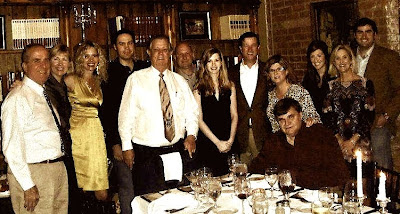 Yet I settle comfortably into that past on occasion myself, as I did this weekend, attending NOMA’s Odyssey Ball wearing my grandmother’s pins in my hair and my mother’s fringe dress, circa 1960. I stared in the mirror and saw not myself, but Mignon, walking towards me, giving me one more chance to hold her dear. 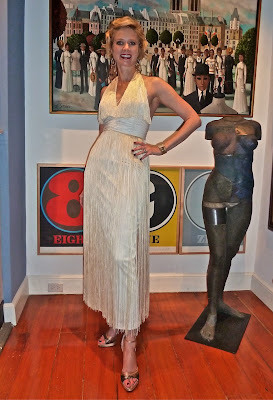 *Uncle Jack famously describes himself as “shy and demure.” Of course, he is anything but…

Coming up: "The Bronzes"

Posted by Wendy Rodrigue Magnus at 11:40 AM