The Ghost of Christmas Past

I try and, honestly, fail to imagine 1950s New Iberia, Louisiana. I’ve stared at this photograph for hours, a six-year old George Rodrigue dressed as a cowboy on Christmas morning, an only child surrounded by symbols of the time: a Radio Flyer red wagon; promotional Coca-Cola Santa Clauses (in multiples because his dad traded them on a brick-laying job); a dartboard featuring Little Black Sambo*, a reality of a bigotry so culturally ingrained that no one in young George’s world even thought about it; and a photograph on the fireplace mantle of cousin Nootsie, a fighter pilot shot down during World War II. 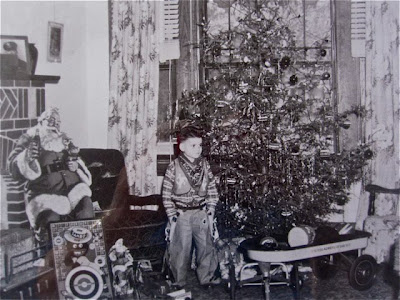 I see the fireplace bricks George’s father laid ever-so-straight with his bare hands, and I wonder at the Christmas ornaments, heirlooms of school projects, world travels, and craft fairs in my own childhood (still hanging on our tree today). And yet by the time George and I married in 1997, the Rodrigue family long ago wrote off their ornaments as junk, disappearing within George’s mother’s aging and Depression-influenced memory. I asked her, a woman who had not decorated a tree in forty-seven years, where do I find your boxes of saved and treasured ornaments?

“I threw those out years ago,” she explained, her mild dementia drifting in and out, “when I turned the attic into a studio for George. Daddy put a window unit up there, our first air conditioner, and I could hear that whirring while George painted all night.” (A rather endearing end to the ornaments, I must admit…)

…at which point she twirled her hands in a disco move, the same gesture she made each time she talked about the floodwaters of 1927 rolling into New Iberia.

(pictured, Marie Rodrigue with her grandsons André and Jacques, 1984) 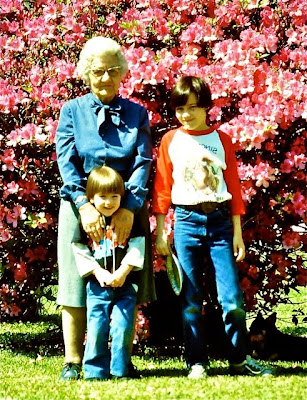 If you ask George he’ll tell you that he had a happy childhood. He might point out, while laughing, that this Christmas, 1950, was the last time he received a gift from Santa or his parents. According to his mother, his father had gone overboard and given him more than enough gifts at age six to last a lifetime. It was also the last year the family would ‘waste money’ on a tree.

(pictured, a photograph by George's cousin, an aspiring photographer named Charles "Brain" Cambre, who superimposed an image of George's father onto the fireplace he built in the Rodrigue duplex on New Iberia's Main Street, the Old Spanish Trail Hwy 90) 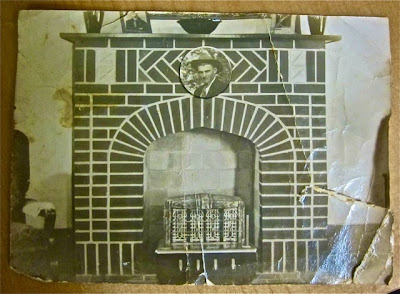 For me, the strongest image in the holiday photograph is of a lone boy, an only child, who, despite dozens of nearby cousins, spent Christmas with a Coca-Cola Santa, Little Black Sambo, and his aging parents, his father well into his fifties and his mother getting close.

At the same time, I see a boy blissfully lost in his imagination, a cowboy enthralled with the Lone Ranger Radio Show, and a growing obsession with 1950s memorabilia that continues today.

(pictured, I’m the Real Thing, an original silkscreen, 2010; for more on this coke machine visit here) At the time of this Christmas photograph, Earl Long was Governor of Louisiana. Our politics, not unlike today, were full of both personal and public drama, particularly with regards to Earl’s voluptuous friend, Blaze Starr, along with his increasing mental health problems. Segregation was the norm in this small southern town, and young George grew up with both his parents’ and society’s pervasive racism, an ugly reality he probably didn’t even think about until he served with the National Guard during the Selma to Montgomery marches of 1965.

(pictured, Earl Long by George Rodrigue, 1989, 60x36 inches; for the story of this painting, along with George’s portrait of Earl's famous brother Huey, visit here) 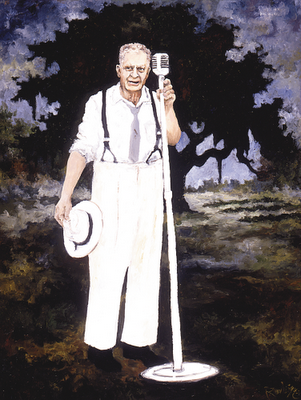 The young George in this photograph could not know of the polio outbreaks and the resulting panic around the corner. (Today he says that the outbreaks were nothing new, but that television made it appear so, because everyone saw the ill children and the iron lungs for the first time). He could not know that three years after this Christmas of 1950, he too would contract polio, a disease that ultimately lead to his discovery of art when his mother brought him paint-by-number sets and modeling clay to cure his boredom.

(pictured, George’s Sweet Inspirations, featuring a young George at his school desk, along with his dogs Lady and Trixie) 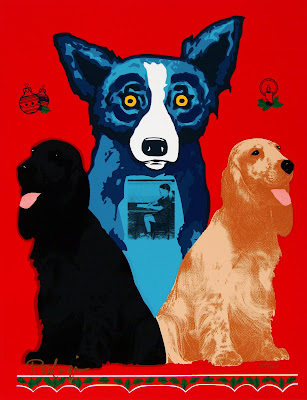 I look at this Christmas photograph of Baby George, as his family called him, and I think about my own childhood, about how I still feel like a young girl, as though it all happened last month. And yet, just recently, as I read a Nancy Drew book out loud to my godchild, I found myself horrified at the racial slurs prevalent throughout the series I adored as a child. Apologizing to her mother for my insensitive reading choice, I altered the text as I read aloud, with hopes of sheltering today’s child from something I brushed over without notice some thirty-five years ago.

I still feel young, and yet I wince at Mad Men, unable to face the treatment of women in the workplace and at home in the 1960s. I can’t see the show without remembering my mother, newly divorced, holding my sister in one arm and my hand with the other, turned away in tears and humiliated from Sears, the only department store in 1973 Fort Walton Beach, Florida, because divorced women had no credit.

Finally, I look at this photograph and I see an odd mix of the typical postcard-like Ozzie-and-Harriet American Christmas blended with a sad reality of the times: a cousin lost to war, a mother forever wounded by the Great Depression, a country and culture steeped in racism. I see the reason why George grumbles, only for a moment, each year as I unpack the decorations until, like me, he’s transformed by the twinkling lights, eggnog, and Elvis as we sit together in our living room, recalling with sentimental nostalgia the holidays past while treasuring every moment of the current Christmas season. 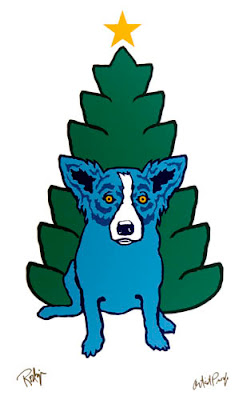 *in the book A Blue Dog Christmas (Stewart, Tabori & Chang, 2000) we used digital technology to remove Little Black Sambo from this photograph. I debated doing the same here but changed my mind as I tried to paint a picture of the times. I also found this article by Michael Mahon of interest: “Revisiting Racially Offensive Book Characters in Children’s ‘Classics’.” It is my sincere hope that I have not caused offense with my words and images in this post.

Posted by Wendy Rodrigue Magnus at 9:06 AM