“We all know that precious things come in small boxes,” says George Rodrigue. “Art and scale have a definite relationship. Words that describe the size of art tend to explain it in a unique way.

“When I first saw Mount Rushmore, I thought ‘monumental, historic, breathtaking,’ hardly the right words if the sculpture was six inches high. I'd put the Sistine Chapel in that same category. Over the centuries, artists’ use of scale tends to be a part of the process.”

Small compositions are unusual for George Rodrigue, and it’s been more than a decade since he approached canvases of the size of his recent works. In fact, most of his paintings from 2010 are large scale, some twelve feet across, as he celebrated the expansive walls of his new French Quarter Gallery. 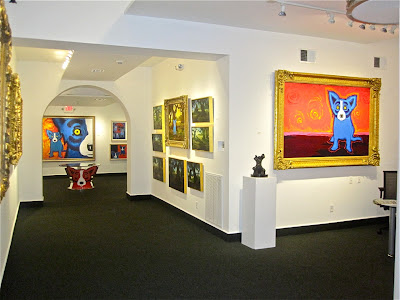 It surprised me when George began work on these petite canvases just after the first of the year. Not only is the size rare, but also is a complete series of work created in New Orleans. For many years now, he reserves long stretches at his easel for the privacy and quiet of his studio in Carmel, California. 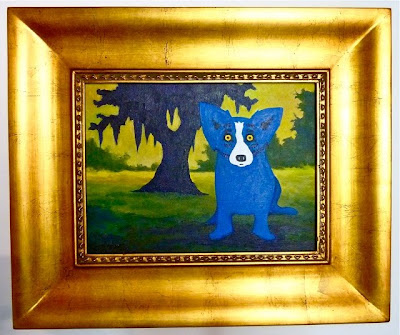 Small paintings with landscapes or multiple dogs are especially rare. These require a tight, controlled approach, along with the use of small brushes and a mahl stick, something George seldom uses since his Cajun paintings of the 1970s and 1980s.

(pictured, George Rodrigue circa 1975 using his mahl stick, a sword he found as a child in the Bayou Teche, to steady his hand while painting) 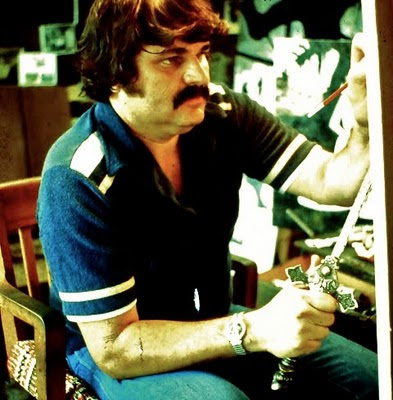 Although small in size, these paintings are not miniatures. However, George painted true miniatures as well, some as small as two inches squared, for a brief period in the early 1970s (as detailed in the post “Miniatures: Manuscripts, Landscapes, Blue Dogs, and Blogs”).

(two paintings pictured below: We Have the Blues Together, and Another Red-Headed Stranger, both 2011, 11x14 inches, acrylic on linen) 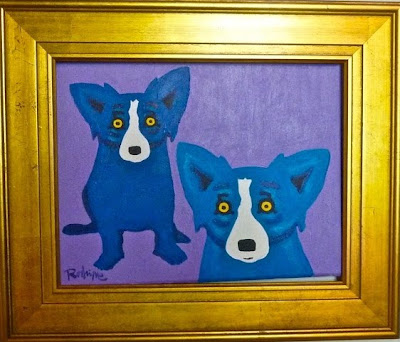 George’s early miniatures feature his oak tree, as do several of the small paintings today. He still enjoys many of the same subjects of forty years ago. Like the Blue Dog, he made Oak Trees, Cajuns, and even Jolie Blonde and Evangeline, his own, repeating these subjects in various forms over the course of his entire career. 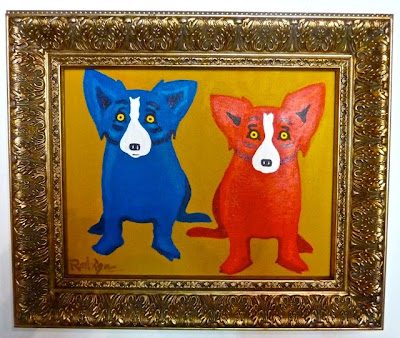 As with his early oaks, he still cuts the tree off at the top, creating interesting shapes underneath and between the branches. As with his Cajun people, he locks the dog into the landscape, as though pasted onto Louisiana, trapped by a strong design, and unable to move both symbolically and literally. 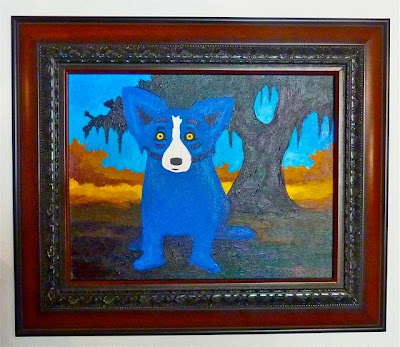 However, unlike his early paintings, today’s Rodrigue landscapes include solid blocks of bold colors, an echo of his art school years and the hard edges and electric hues of Pop Art. This is especially evident in his simplest designs. 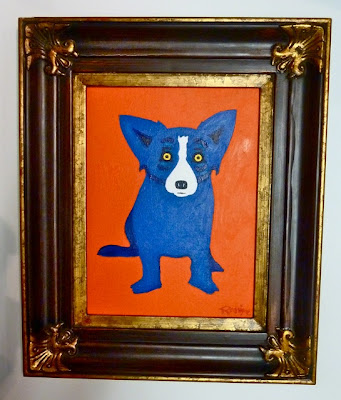 “Small artwork is ‘precious, unique, intimate’ and at times (as with large scale) breathtaking, all words that came to mind the first time I saw a real Faberge egg. I approach these small canvases intending to create something precious, something well thought-out and without room for mistakes, as though each one is a jewel.” – G.R.

As always, George paints in spurts, sometimes going weeks without picking up his brush, working instead at his computer or sketchbook and, especially lately, on projects for the George Rodrigue Foundation of the Arts. Recently, however, he spends twelve to fifteen hours a day at his easel, no doubt motivated by these small, distinctive works. 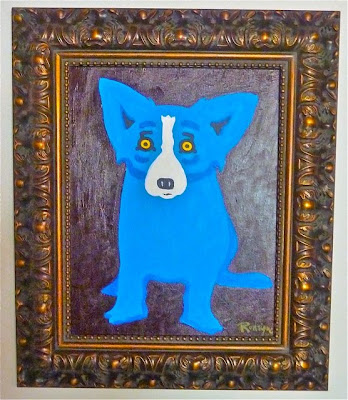 For more information on the small paintings of 2011, contact Rodrigue Studio.

Currently at Gambit: “Jealousy in the Art World,” an account of the green-eyed monster from Venice to New Orleans, with input from George Rodrigue

Posted by Wendy Rodrigue Magnus at 11:44 AM