Although not a rider himself, George Rodrigue relates to the seduction of the open road and the notion of freedom and Americana attached to motorcycles. Twice each year we cross the country in our truck, no books or computers allowed, so that we experience the West without distractions. We keep the music to a minimum, lost instead in discussions of mountains and detours, or more often riding in silence.

We visit roadside diners, leftover relics from the old Route 66, from the days when highways hugged the terrain. And we stop all too often for George’s road trip indulgence, a pineapple and coconut blizzard, paid for with the Dairy Queen gift card he keeps in his wallet, an annual present from our perceptive foundation staff. 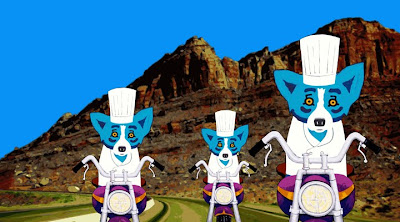 George’s interest in motorcycles began in the early 1960s when his cousin owned a Harley-Davidson in New Iberia, Louisiana.

“After crashing John Edward’s motorcycle two or three times,” he says, “I wasn’t excited about riding a bike anymore.”

It was in the late 1980s that George bought a bike of his own, a Harley-Davidson showpiece for his studio alongside Landry’s Restaurant in Henderson. Not long afterward Gerald Defez, who owned the property, commissioned a painting of his father, who rode a motorcycle as a member of Louisiana Governor Huey Long’s State Troopers. 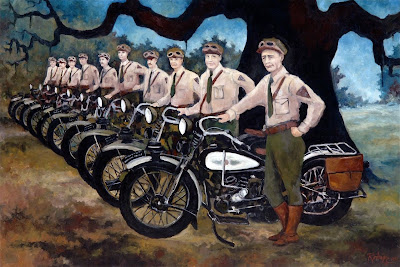 By the early 1990s George abandoned his Henderson studio in favor of a camp on the Atchafalaya Basin in Butte la Rose. The Blue Dog, which he began in 1984, was now the main focus of his work. Without studio space for his motorcycle, he opted instead to make it a piece of art for display within an upcoming New York exhibition, followed by his New Orleans gallery. 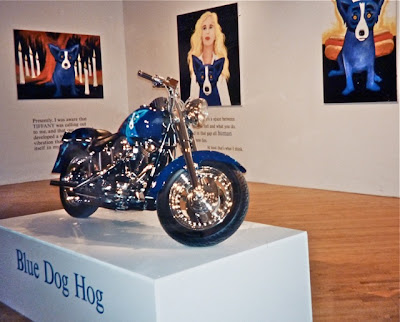 The newly painted Blue Dog Hog premiered in 1994 at The Time is Always Now, a gallery in SOHO, where it stole the show on a raised platform in the middle of the large, warehouse-type space. George surrounded the bike with large canvases, most of which he painted in the driveway of his then-home in Lafayette, Louisiana. 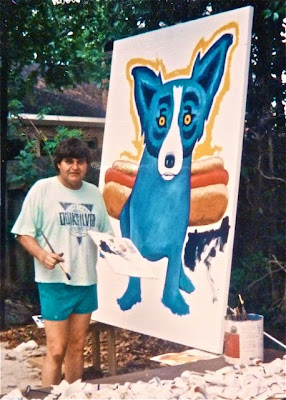 Before painting the bike, he removed the front and back fenders as well as the tank, making the pieces easier to prime and paint. He reassembled the bike with significant additional chrome features, reducing its driving capabilities, something of no consequence since he intended a stationary sculpture for display, and not a means of transportation. As a final touch, he painted a matching helmet. 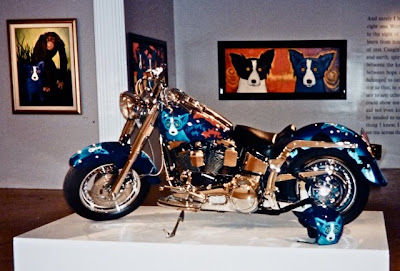 Following New York, the motorcycle became a popular French Quarter photo-op while on display in the Rodrigue Gallery of New Orleans until purchased by a Wisconsin collector of both Rodrigue paintings and Harley-Davidson motorcycles. Recently the collector loaned the bike (now refigured for riding) for public exhibition at The Iron Horse Hotel in Milwaukee. 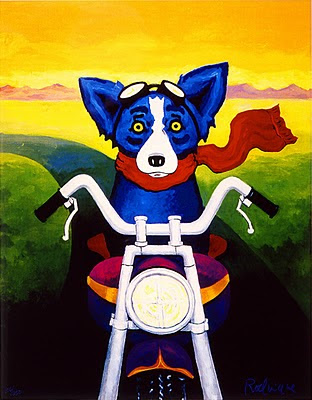 It was the Xerox Campaign of 2000 that inspired George’s most famous motorcycle image, A Faster Breed (above), used in magazine ads throughout the United States and Europe over a nine-month period. (See the post “Blue Dog 2000: The Year of Xerox”).

Thanks to a new silkscreen press, George created oversize prints beginning in 2002. Excited about the scale, he designed a complex combination of designs and colors for his first large silkcreen, The Rat Pack (25x50 inches, edition of 25) 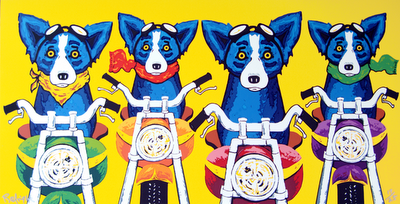 He followed with an even larger print, Easy Riders, referencing the 1969 movie starring Dennis Hopper and Peter Fonda, as well as the patriotism inspired by his own cross-country drives. (32x50 inches, edition of 50) 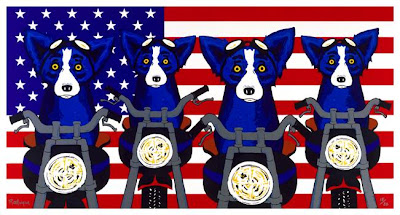 For his latest motorcycle image, Fast Food in Utah (pictured at the top of this post), Rodrigue manipulated a photograph and compiled a photo-silkscreen collage.

“Photography has been a part of my creative process for a long time. As I look back over the last forty years, I realize that I have worked basically the same way the entire time. For my early Cajun paintings I photographed models, then used my photographs as sources, “arranging” the images within them in different ways in order to best portray whatever folktale was my subject.

“In this new print, I use the camera in a similar fashion. First I made hundreds of photographs of an area in Utah last summer. After studying and playing with these images for several months, I was ready to make a silkscreen print that incorporates the Blue Dog’s shape, fusing the two images together.

“With today’s technology, the computer has given me hundreds of variations with which to work – in an almost collage-type construction.” -G.R. 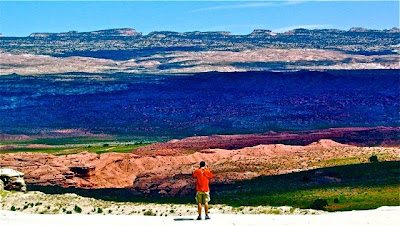 Because we favor a truck on our cross-country drives, George and I live vicariously through the motorcycle clubs we pass on the highway. Occasionally we detour through the Black Hills area of Deadwood and Sturgis (South Dakota) especially if our timing coincides with the Sturgis Motorcycle Rally, garnering fabulous photo opportunities and people-watching.

Although we just returned mid-January from a three-week trek, we’re talking already about this summer and the endless potential and inspiration of... the road. 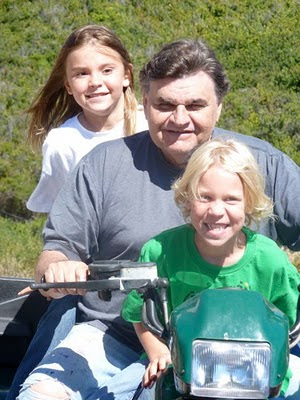 Pictured, George Rodrigue takes our nephews for a ride on his six-wheeler

For stories from our cross-country adventures, click the label phrase ‘American West’ below

This week at Gambit’s Blog of New Orleans: “Forty-Something: An Aged-Out Princess and Festival Queen"