Blue Dogs and Cajuns on the River: A Painting, Print and Exhibition

“Once a person tries hard enough and long enough without results, the last place they expect to be recognized is in their own backyard.  George Rodrigue could not be more excited about this exhibition or the turnout of public support if his art were on view at the Metropolitan Museum of Art.”
That’s basically the speech I made in 2008 during the opening of George Rodrigue’s retrospective exhibition at the New Orleans Museum of Art.  I thought at the time that nothing could top the experience of nearly three hundred works and sixty thousand visitors in our beloved NOMA, a fine arts institution for the southeast, celebrating its 100th birthday this year.
However, there are other milestones if not more important, than just as, such as this year’s tour, broadening the boundaries of George’s backyard outside of New Orleans to include the state he loves, Louisiana. 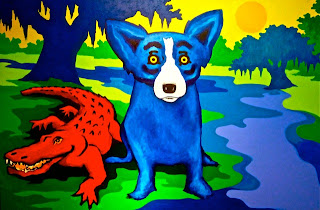 The painting Blue Dogs and Cajuns on the River (2011, 48x72 inches) celebrates a section of this state-wide tour, a major museum event in 2011, a blockbuster show at the Louisiana State University Museum of Art located in the Shaw Center for the Arts in Baton Rouge.
(pictured, one of several billboards scheduled for the south central I-10 corridor)

I asked George about the painting.

“Unlike the black bayous and dark trees of my early Cajun paintings, I use color here to reflect a modern Louisiana.  In the art world, the use of color, especially flat, bright color, is modern, in the Pop Art vein.  I contrast those colors with the dog, the only thing that is blended and painterly, making both the dog and overall composition more important.

The alligator, like the landscape, is flat, because it too has been here for millions of years.  The dog is part of today’s world, born a mere twenty years ago out of my head.”

On view currently and briefly at the new Rodrigue Gallery in the French Quarter, this painting is a highlight in the Baton Rouge exhibition, July 24th to September 18th, joining sixty Rodrigue paintings spanning more than forty years of the artist’s career.
The meat of the exhibition, as with the other stops on this statewide tour, includes Blue Dog paintings from the permanent collection of The New Orleans Museum of Art, as well as Rodrigue’s Saga of the Acadians, fifteen paintings tracing the history of the Cajuns, on loan from the Anne and Wendell Gauthier Family Foundation of New Orleans. (See the Saga paintings here) 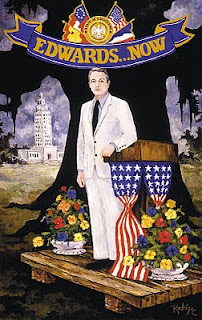 In addition, the Baton Rouge show includes a collection unique to this state capitol venue:  Rodrigue’s five governor’s portraits, Huey Long, Earl Long, Edwin Edwards (above), Kathleen Blanco and Bobby Jindal, hang together for the first time.
Also on view are Rodrigue’s portraits of Presidents Ronald Reagan and Bill Clinton, a selection from his series called Hurricanes, the first Blue Dog painting, and the original painting of Mike the Tiger, prints of which raised more than $1 million in 2003 to help build the LSU mascot a new habitat. 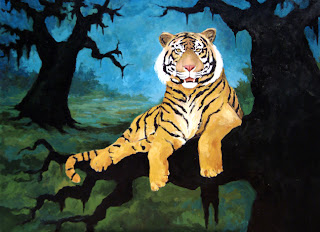 From the way he talks about it, I know that George is most excited about seeing his Governor’s portraits as a collection.  For me, however, a real highlight of a show like this is its focus on his earliest landscapes, most borrowed from his personal archives, as though he discovers the soulful and unique beauty of his home state through applying paint to his canvas.
(pictured, Louisiana the State We Live In, 1972) 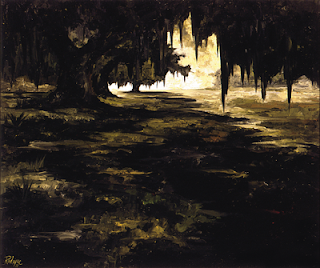 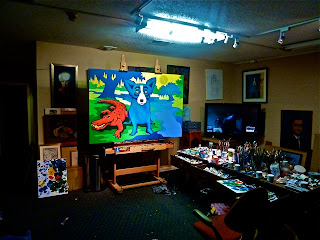 Speaking again about the painting Blue Dogs and Cajuns on the River, he says,

“The river in this painting represents our cultural history.  The waterways of Louisiana were the early highways of its inhabitants.  We had no roads; we just had the water.  They were the natural fairways for commerce, development, and everything necessary for settlers to expand.

“The Indians knew this for fifty thousand years before we came along.  They canoed down the Mississippi River from way up North, which is why we find tomahawks that include rocks from Illinois and Missouri in Louisiana’s Indian burial grounds.”

The exhibition in Baton Rouge and other Louisiana venues celebrates our state through the paintings of George Rodrigue.  When I made this comment to George, he laughed at the irony, recalling the collectors of his Cajun paintings.  Only a handful of people from Louisiana own his original work.  With the universally appealing Blue Dog, this is understandable.  But what of the Oak Trees and the Cajuns?

“I don’t think the local people, my own mother included, liked the way I portrayed them,” says George, explaining the personal significance of this statewide tour.  “My first sell-out gallery show was in Boston, where they introduced me as a ‘Ky-yoon’ artist, and after that Houston, Los Angeles, and South Florida.  In a way this encouraged me, because I realized my luck nearly from the beginning, that it isn’t what I paint, but rather how I paint that attracts my collectors.” 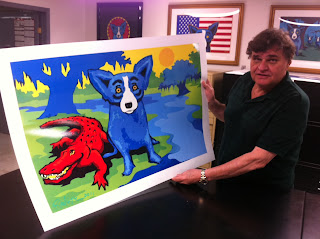 
Pictured above, a new silkscreen print (26x38, edition 450) available through Rodrigue Studio.  “The alligator is a Cajun,” says George Rodrigue, “because most Cajuns, when they’re mad, act like a red alligator, like a ‘Ragin’ Cajun’!”
Visit here for a list of lectures and other events with George Rodrigue at the LSU Museum of Art this summer
Also this week, “Painting (and Writing) by Number,” a story for Gambit’s Blog of New Orleans
I'm tweeting this week from New York City, visiting museums with George Rodrigue-