Spring is festival season in Louisiana, and this history, particularly regarding Cajun music, exists visually in the musicians’ portraits painted by George Rodrigue.  Since the early 1970s he painted dozens of music-related scenes, Southern music legends including everyone from Elvis Presley to Mahalia Jackson.   (See the post “Musicians:  A Series of Paintings”)
However, the Cajun music subjects remain his favorites, returning again and again to his canvas like painterly records of a once isolated culture.
It was 1971, the year of George’s first painting with people (The Aioli Dinner), that he painted accordion player Iry LeJeune. 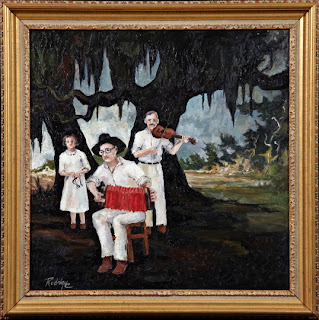 This early work shows a twenty-seven year old Rodrigue already confident in his graphic symbolism, as he seeks to preserve the Cajun culture on his canvas.  The figures, spirit-like, all in white, are shapes set against the Louisiana landscape, the land that produced an ardent people devoted to their culture, veritable symbols of themselves, long before the American Cajun craze and stereotype.
Born near Church Point, Louisiana to a farming family, Iry LeJeune (1928-1955), near blind from birth, turned to music as a young child.  It was his cousin, Angeles LeJeune, who first introduced him to the accordion.  But it was the records of Amedee Ardoin that most inspired him, influencing both his Cajun-French style and his recording future. 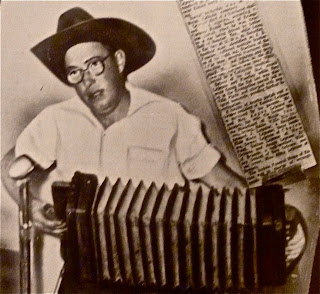 Known for his soulful music, many consider LeJeune to be the greatest Cajun accordion player and recording artist of all time.  Produced by Eddie Shuler and Folk-Star, a subsidiary of Goldband Records out of Lake Charles, Louisiana, Iry’s recordings of "Calcasieu Waltz," "Jolie Catin," "Evangeline Special," and many more were big hits.
Despite the musician's near blindness and impoverished means, he became a legend in his twenties, much like his Alabama contemporary, country music star Hank Williams (1923-1953, the subject of next week’s post). 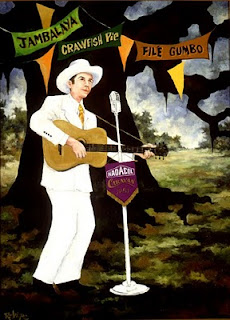 Shuler claims to have first met LeJeune as he walked down a dusty road, carrying his accordion in a flour sack.  It was the first accordion the music producer had ever seen.

“He walked up to me and asked me about making records,” recalls Shuler, who agreed to take a chance.  “In those days the Cajuns didn’t write no letters and things; they shook hands, and that was their contract.”

“I bribed the engineer at the radio station to cut the disc for us.  It was easy; just a fifth of Old Crow.”

The men made seventy dollars on the record, and a Cajun legend was born.
Sadly, Iry LeJeune died at age 35 when he and fellow musician, fiddler J.B. Fuselier, stopped to change a flat tire late one night on their way home from a performance at the Green Wing club in Eunice, Louisiana.  Fuselier, who was driving, survived the accident, but LeJeune, unable to see, had no warning and died instantly.  He left behind a young family of five children, dozens of recordings, and a Cajun music legacy.  (pictured, Doug Kershaw with Iry LeJeune) 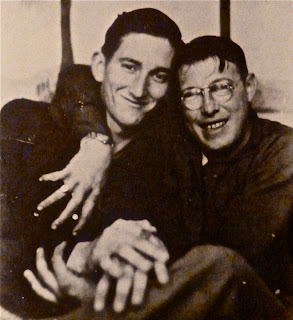 “Oh, my ‘little world,’ I know that last night

To meet you, pretty heart.

Hey-aie, the promise you made me!

You turned your back on me to go meet another.”

-Iry LeJenue, "The Evangeline Special," 1948; Listen here.
Wendy
References:
Cajun Music:  A Reflection of a People, Compiled and Edited by Ann Allen Savoy, Bluebird Press, Inc., Eunice, Louisiana, 1984
J’ai ete Au Bal (I Went to the Ball):  The Cajun and Zydeco Music of Louisiana, A film by Les Blank, Chris Strachwitz, and Maureen Gosling, Narrated by Barry Jean Ancelet and Michael Doucet, 1993.  View a clip-
*Also this week, I hope you enjoy “Painting (and Writing) By Number,” for Gambit’s Blog of New Orleans 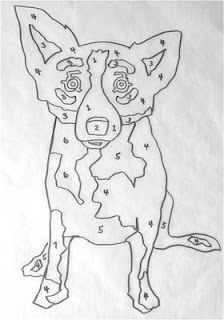