Until recently I thought I understood Louisiana, its ins and outs, its people, its terrain, and its history.
Yet we spent much of this past week in northeast Louisiana, and I found town after town unfamiliar, including our destination, Monroe, a city of cypress groves, 60,000 people, and tremendous state pride, located 270 miles north of New Orleans.
Monroe’s claim to fame is the birth of Delta Airlines, a small company started in 1924.  They delivered mail to the rural South and, beginning in 1929, carried passengers, continuing until 1941 when Delta moved to Atlanta.
The locals place the accent on ‘Mun’ rather than ‘roe,’ a distinction I should have adopted easily, since I had a great uncle named with the same inflection.  Yet I messed it up time and again, briefly reprieved when my stepson Jacques Rodrigue innocently flubbed the name Rayville when he introduced our 2011 scholarship winner who lives in the nearby town.
“It’s pronounced ‘Rayvul,’" chuckled the woman behind me. 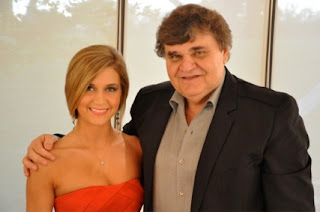 (pictured above, George Rodrigue with GRFA 2011 First Place scholarship winner, Savannah Bridges, this week at the Masur Museum, Monroe)
We visited this part of the state for a tour organized by John Bullard, Director Emeritus of the New Orleans Museum of Art, in celebration of the museum’s centennial.  Exhibition highlights include Blue Dog and Hurricane paintings from NOMA’s permanent collection, as well as Oak Tree and Cajun paintings from George’s private collection, and best of all (certainly for me), rarely-seen original paintings from local collectors. 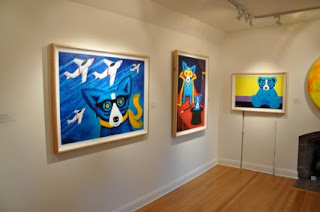 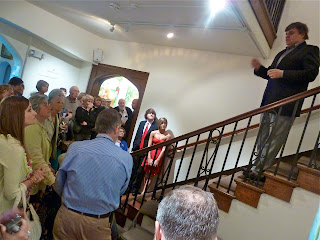 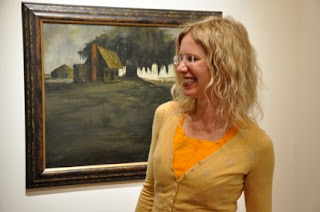 The show, titled “Blue Dogs and Cajuns," also includes the winning artwork by GRFA's sixteen scholarship winners. The exhibition premiered in January at the Imperial Calcasieu Museum in Lake Charles, Louisiana and travels in various forms during the rest of this year to Alexandria, Baton Rouge, and Shreveport. (schedule posted here) 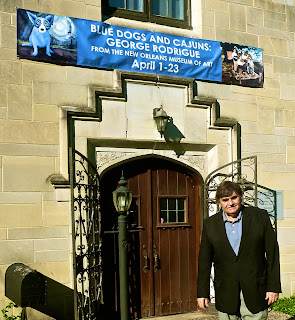 “I’m very thankful to John Bullard and the New Orleans Museum of Art for scheduling this statewide tour and arranging my visit once again to the Masur Museum.  Although my Cajun paintings appeared as well, this time the Blue Dog was the hit of the show.” – G.R. 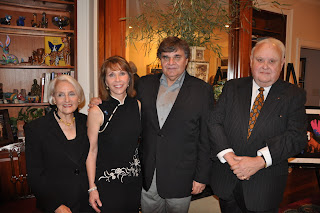 (pictured above, George Rodrigue with members of the Advisory Council from the New Orleans Museum of Art, representing the museum during the Monroe events)
George Rodrigue visited Monroe often over the years.  In fact, some thirty years ago the Masur Museum hosted an exhibition of his Cajun paintings.

“At the show I met Dr. Armstrong and his wife Gabriella, a purebred Italian, born in Italy.  They liked my work and immediately bought a painting.  We’ve been friends ever since.” – G.R. 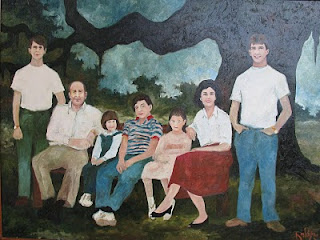 “At some point they commissioned me to paint their family portrait.  Yet each time I drove to Monroe to photograph the group, Gabriella was pregnant again.  It took twelve years for them to settle down, and so I finally painted the family.” – GR

And indeed, that friendship remains stronger than ever.  Ralph recently nominated George for the Distinguished Eagle Award, making him one of only six recipients to be honored in this way in the history of Louisiana Scouting (related post here).  In addition, it was Ralph and Gabriella that sponsored this year’s Monroe exhibition and hosted the patron party in their home.
(pictured below, George and Wendy Rodrigue with members of the staff and museum board of the Masur Museum, including Ralph and Gabriella Armstrong, far right) 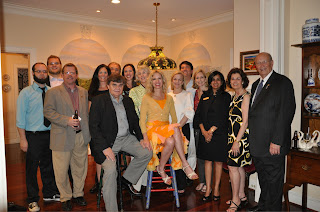 While in Monroe we also hosted “Sidewalk Chalk with George” at the Emily P. Robinson Community Center.  In this case, the pictures say it all… 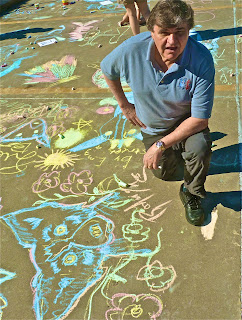 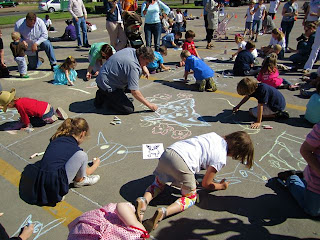 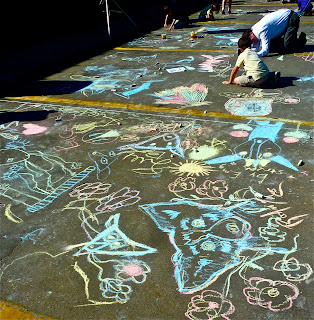 Generous with their attention, print space, and airtime, the press also flooded George on this visit.  We are especially grateful to the News-Star daily paper, KNOE-TV, servicing Arkansas, Louisiana, and Mississippi, and KEDM Public Radio, a personal favorite since George recently agreed to support public radio with a month’s design for the 2012 NPR calendar.
(pictured below, George Rodrigue with Hope Young, Features Editor for the Monroe News-Star.  Read Hope's story here) 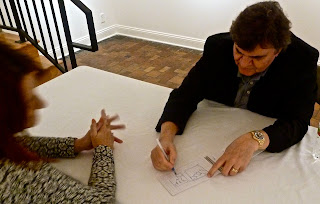 One evening we enjoyed an excellent dinner at Sage with Chef Cory Bahr, a John Besh protégé.  Chef Bahr makes Chef Besh, the still-young New Orleans ‘Restaurant August’ legend, proud with his complementary yet unique culinary arts in the northern part of the state. 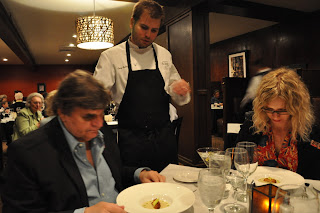 Finally, we visited Ouachita High School in West Monroe and launched the high school portion of “George’s Art Closet,” a program organized by the George Rodrigue Foundation of the Arts.  Along with the students, George unpacked art supplies for Ms. Jones’s talented class, a gift possible through recent and generous donations to GRFA. 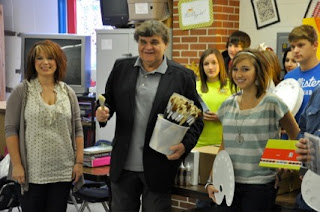 Afterwards we joined the students in the school’s auditorium, where they studied art with a special guest lecturer. 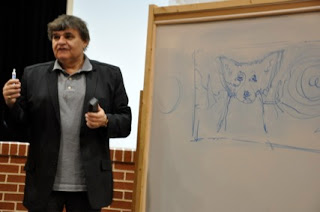 Leaving Monroe, George and I detoured, spending several hours at Poverty Point, a recently discovered Indian settlement in a remote area of Louisiana.  I would tell you all about it, except that I just posted a story for Gambit on this ancient architectural and cultural wonder here. 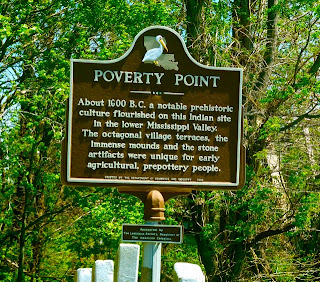 We next bee-lined to Auburn, Alabama, where we present tonight our husband-and-wife painting demonstration/lecture for a special event at the Jule Collins Smith Art Museum at Auburn University.  I’m not sure if I’ll blog about it or not, but if you’re so inclined, I hope you’ll follow along as I stumble through yet another cyberspace phenomenon, twitter.
Wendy
George and I dedicate this post, with special thanks, to MUN-roe residents Dr. Ralph and Gabriella Armstrong for their devoted friendship, generous sponsorship, and outstanding photographs (sprinkled throughout this story)-
How does George Rodrigue pronounce his name?  Find out here-

Posted by Wendy Rodrigue Magnus at 12:57 AM