“She created her own world, and I created mine,” explains George Rodrigue to his audience at the Alexandria Museum of Art last week, as he nods from a New Mexico landscape (left of the podium; click photo to enlarge) to his own wet Blue Dog canvas. 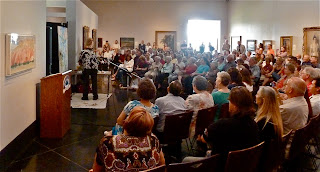 I made a mental note to remember the line, the nicest thing he’s ever said about artist Georgia O’Keeffe (related post here).

“I’ve been to Ghost Ranch,” he continued, “and this painting has no relationship to the actual mountains.  But that’s okay.  That’s the prerogative of the artist, to interpret what he or she sees and make it their own.”

Normally in an auditorium, this unusual painting demonstration occurred within the museum’s largest exhibition space, surrounded by Copley to Warhol, a collection of thirty American masterpieces from the New Orleans Museum of Art (NOMA), on tour throughout Louisiana during 2011 as the museum celebrates its centennial.
In a bit of irony, NOMA also tours its significant Rodrigue collection this year, an exhibition recently ended in Monroe at the Masur Museum (story here) and opening July 23rd in Baton Rouge at the LSU Museum of Art (story here), followed by the Louisiana State Exhibit Museum in Shreveport this fall.  Due to logistical problems, however, Alexandria missed the Rodrigue show.
The Anne and Wendell Gauthier family of New Orleans came to the rescue, loaning Alexandria the Saga of the Acadians, a series of fifteen paintings created by Rodrigue between 1985 and 1989.  Without an auditorium, the museum’s lecture plans, we assumed, included the small gallery housing these works.
Be sure and click the photo to enlarge-

(pictured above, the Saga of the Acadians, as it appeared in the Lake Charles Calcasieu Museum earlier this year; for a detailed history of this important series of paintings visit here)
Anticipating a large crowd, the Alexandria Museum of Art had other ideas, however, which is how George ended up nodding to Georgia O’Keeffe, and I ended up speaking in the presence of Mrs. Asher B. Wertheimer, I immediately thought to myself, as the London socialite stared at me from across the room. 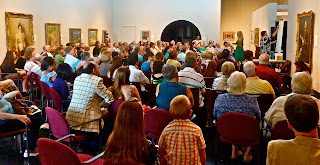 It was recently that I dove into the scandalous story of John Singer Sargent and Madame X for the post “American Artists in Paris.”  Now the elegant Mrs. Wertheimer watched me as though she were the face of art history and patronage, evaluating my delivery and checking my facts. 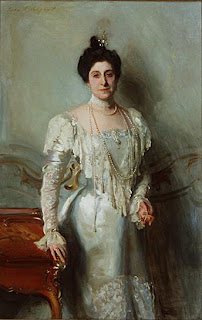 (pictured, John Singer Sargent’s Portrait of Mrs. Asher B. Wertheimer, 1898)
George painted as I shared his story with the audience.  He worked quickly, with large brushes and paint straight from the tube, completing a painting in less than one hour for entertainment’s sake, only to repaint it later over several days in his studio.  As he turned a blank canvas into something else, I spoke, reacting to the great works in the room. 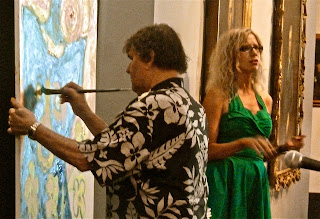 As a young man returned from art school, I explained, George made the decision almost immediately to paint Louisiana.  He visited the New Orleans Museum of Art and studied the great masters, especially the Hudson River School.  He reacted to the works of Richard Clague, Joseph Meeker and Ellsworth Woodward.
I gestured to the dreamland of visual aides hanging on the wall.  The heads turned from George’s canvas, straining instead to see this European style, both the birds-eye view of the classically trained artists and the painted reflections of the Impressionists. 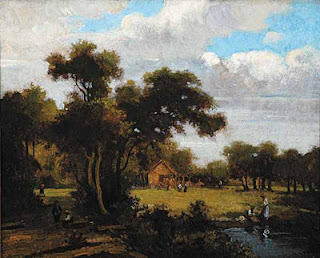 (pictured, a landscape by Richard Clague, 1816-1878)
For George, this is not Louisiana.  He found his own direction, pushing the oak tree to the front of his canvas, cutting it off at the top so that the light shines from beneath its moss and branches, and defining his distinct shape with hard edges.  From the beginning, he graphically interpreted Louisiana with hopes of preserving the fading Cajun culture.
(pictured, Rodrigue in his studio, 1971) 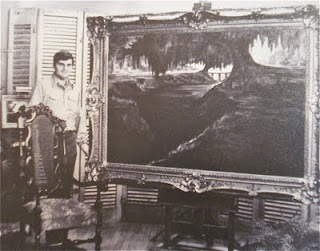 “The difference between everyday art and great art is that everyday art might look good when you first see it, but after two or three days you lose interest.

“These paintings,” explained George Rodrigue as he gestured to the walls, “continue to ask questions; they retain mystery; and they retain a distinct quality so strong that each artist holds his own among the others, even in a room of paintings spanning two hundred years.”

A man raised his hand.

“Your painting looks alive to me,” he said.  “I watched you paint, and yet I can’t explain in my mind why your approach differs from illustration.  I see it, but I don’t understand it.  How did you paint something that looks so alive?” 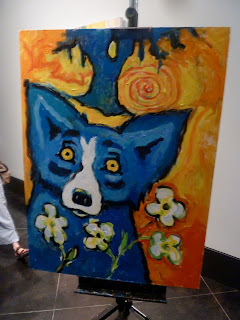 George referenced the walls again, unable to resist the energy in the room, as though America’s greatest artists depended on his answer.

“It’s in the artist’s mind, in his approach,” he explained, as he looked towards Warhol, Rivers and Inness.  “All of the paintings here look alive.  In great art the viewer has a constant communication with the painting, no matter what the painting’s age.

“An illustrator’s role in creating art is to hold the viewer’s attention for two or three minutes.  He doesn’t intend his art to have a lasting effect with permanent communication.”

Following the painting demonstration, George visited with the crowd.  Some remembered him selling his paintings on the road from the trunk of his car.  Others shared their children’s versions of Blue Dog.  One couple presented him with a letter describing their feelings for Tee Coon Gone Fishing:

“Tee Coon looks wonderful in our dining room, and he reminds us daily how happy we are to be ‘home’ in Louisiana.  Your painting is one of our most treasured possessions.”

Another pointed out a Rodrigue steamboat painting, circa 1972, donated by their family to the Alexandria Museum of Art.

George ended the evening with a favorite piece of advice recalled from art school:

“Art is like a yardstick (held horizontally) with the Mona Lisa at one end and black paint on a black canvas at the other.  Most artists move back and forth along the stick, getting nowhere.  It’s important, however, to find your place on that stick and go up.”

He looked again at the masterpieces hanging in the room, pausing with begrudging respect at the O’Keeffe.

“Once you’re up here,” he continued, pointing to an imaginary spot in the air some two feet above the imaginary stick, “you are by yourself.”

“Once you’re up here,” he emphasized, “no one can touch you.” 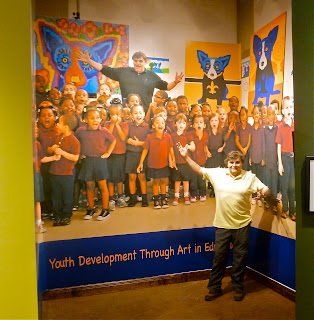 Pictured above, George Rodrigue celebrates the opening of his new foundation offices this week at Magazine and Julia Streets, in the New Orleans Arts District
Rodrigue’s Saga of the Acadians and NOMA’s Copley to Warhol continue at the Alexandria Museum of Art through July 1, 2011; also on view, award-winning artwork from our sixteen 2011 scholarship finalists, sponsored by the George Rodrigue Foundation of the Arts
The Alexandria Town Talk reviews Rodrigue’s visit in an article here
This week for Gambit:  "Breakfast at Lea's Pies," an account of our adventures on the road as we returned from Alexandria
I hope you’ll join me on twitter this month as I post photographs and musings from George Rodrigue’s studio in Carmel, California

Posted by Wendy Rodrigue Magnus at 11:55 AM