George Rodrigue rarely speaks of his father.  I’ve written before about his construction and tomb business, as well as peripheral facts regarding his Cajun heritage.  But even when pressed, I had a hard time pulling personal information about Big George from his son.
As I suspected, George struggles with these memories, and he stared in the distance and spoke slowly, obviously distressed.  I strained to hear him over the music in his studio, but he protested as I moved to turn it down, saying that Johnny Cash and “Luther Sang the Boogie” helped him with the past. 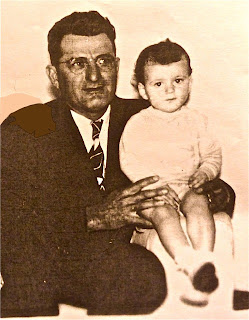 “Mama called him Daddy and everybody called me Baby George.  To the town my daddy was “Big George,” not only because we shared a name, but also because he had huge hands and was big and strong.  One cousin remembers my daddy lifting the back of a Model T Ford off of the ground.
“He quit school in the 6th grade to work with his father, who also was a bricklayer. My daddy was a pitcher for the New Iberia baseball team. 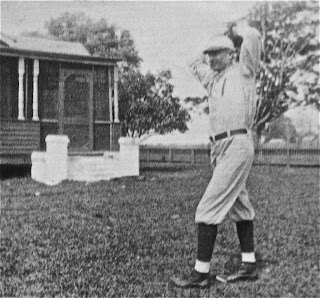 “He was what they called a Master Mason, because he built fireplaces and designed brick boilers for the sugar mills.  He was an artist in his own right, and he built his reputation on that. 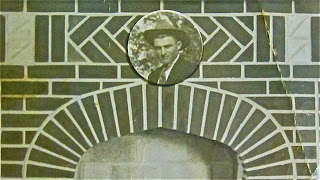 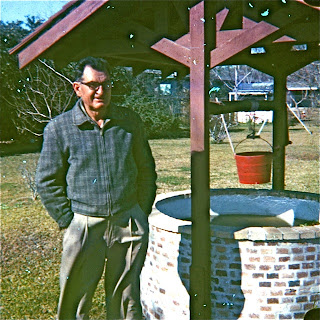 “My daddy surprised her when a master carpenter designed an elaborate roof for the wishing well.  She screamed about the expense and they fought bitterly.  But she got it anyway and everyone, including her, enjoyed it.  We had tadpoles and two frogs, and then we let them go.  We tried out goldfish, perch, and all sorts of minnows.
(Note:  It’s because of this well, I believe, that George will never sell this house.  He painted it many times, such as this beautiful interpretation of Evangeline). 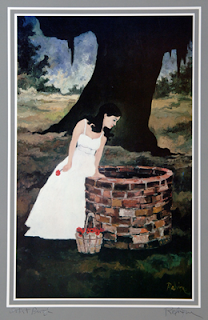 “I was in the 8th grade when Daddy got sick.  They took me to the hospital in Lafayette and told me that he would die.  But when I woke in the morning in the waiting room, they said he made it through the night.  My mama sat clicking her rosary beads.  She thought it was a miracle.
“His illness changed his life, and he wasn’t the same for ten years, until he died in 1967.  He never saw me become an artist, but he saw me paint as a kid in my studio in the attic.”
(Big George holds a small dog in this painting from 1972) 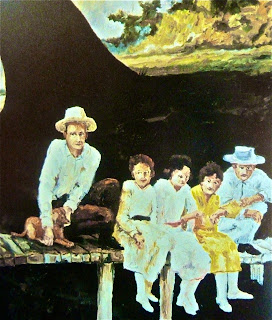 But George, I pressed, what was he like as a person?  Tell me about his personality, his beliefs.  What kind of man do you remember?
He sat quiet for a long time, his mind elsewhere, recalling a father he never really knew.
“He just wasn’t the same after he got sick.  I didn’t understand who he was when I was in the 8th grade, and so in a way I never knew him at all.”
Finally he shared the random stories, the bits and pieces he found in his mind.
“Others told me that he laughed and told jokes. 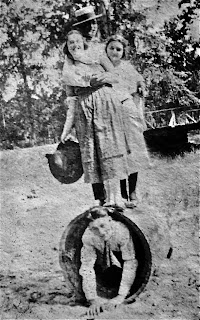 “He and my mama traveled throughout south Louisiana looking for bricklaying jobs for twenty years until they settled in New Iberia.
“When the street fair came to town, he knocked the bottles from the shelves with three balls.  He won so many prizes that they banned him from the fair.  But he changed his clothes and hat and returned, disguised, to play again.  That was long before I was born. 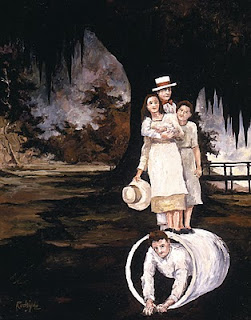 (pictured, George's father helps balance the ladies in Boudreaux in a Barrel from 1972; for more on this classic painting visit here)
“I was a pitcher for a while in the Boy Scouts.  Daddy was the umpire, so naturally I never threw a ball.  I remember one time when I lost control of the ball and it went straight in the air.  The catcher caught it and someone in the stands yelled,

Tell me that story again about when you went fishing.
“After his surgery, he couldn’t work.  Mostly he sat bored in the house.  So we went fishing.  We found all kinds of places in south Louisiana, some private, some paid, and some on the levee."
What did you talk about?
“It was important to him that I never pick up a brick.  He said it over and over.  He wanted me to do something else.  When I started drawing, he forbid me to be an architect.  I like to draw plans, but he hated architects, because he said that they only know how to draw stuff on paper and not how to build, not how to make it a reality.

“I was spoiled because I was an only child, but he had two sisters, Aunt Pauline and Aunt Evelyn, and they spoiled him.  When they died, we inherited their businesses, which he tried to run --- rent houses, bars, trailer parks, and other projects from their husbands.  Eventually my parents sold everything, unable to keep it up.”
Anything else, George?
“He left fireplaces, houses, walkways, all things people still use.  And I guess that’s his legacy.  He built my uncle’s house, my cousin’s house, and two houses for us. 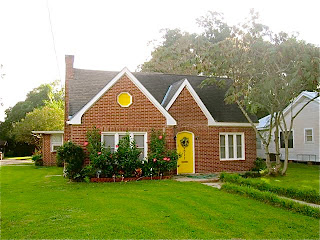 (pictured, the Rodrigue family home on St. Peter Street in New Iberia, as it looks today)
"I watched him build fireplaces and complicated steps.  He never finished school, but he had a book for his figures.  To do that kind of work involved a lot of math, and I guess he taught himself.
“He died too young, and he got sick before I really got to know him or before he got to know me.” 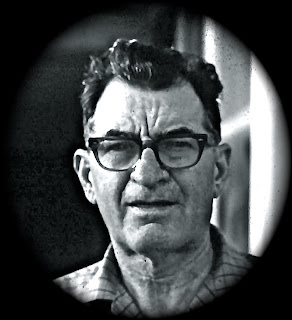 Wendy
For a related post see "How Baby George Became an Artist"
Also in honor of Father’s Day, a post about my dad in this week’s Gambit:  A daughter learns the shocking truth about her parents in “For My Father”

Posted by Wendy Rodrigue Magnus at 10:20 AM