Musings of Heather the Great (an Artist’s Sister-in-Law)

My sister, Heather Wolfe Parker, a.k.a. 'Heather T. Great,' (her title since grade school), steps in as a guest-blogger this week- 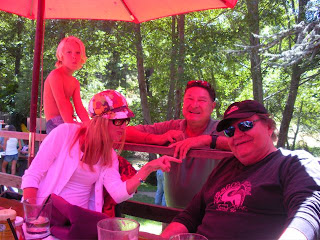 (pictured above, my son Wyatt, me, my dad, George)
It’s the same ol’ dull routine each time I phone.
Poor George has been bludgeoned by the force that is our family for nearly twenty years.
I first met George Rodrigue when I was twenty, an Ole Miss sophomore with little more than the next party on my mind.  He was, and remains, unintimidating, as he rendered me effortlessly on a wine-stained cocktail napkin.
It wasn’t long before George began accompanying my sister on our Wyoming family vacations and showing up on the New Orleans West Bank at my Grandma Helen’s for Christmas. Clearly this was serious torture that my own future husband endured simultaneously. I started thinking that this guy might be serious about my sister.
Sure enough, they married, and my sister inherited two boys, an old lady, and a French, wannabe Don Juan named Romain. So I packed a bag and visited the honeymooners in Lafayette.
What I found startled me. My independent, savvy sister wore her apron like a badge of courage as she cooked and gardened relentlessly. Honestly, I never knew she could make anything other than tacos and tuna salad. Who’s Your Mama? Are You Catholic and Can You Make a Roux? (Marcelle Beinvenue) became her Bible, as she heeded our mom’s only homemaking advice: “If you can read, you can cook.” Chocolate cakes and red beans and rice quickly vanished as teenage boys clambered through the kitchen.
I felt like an outsider in this odd house of boys, and I wondered if my sister shared similar feelings. How was I to understand these testosterone laden people who were taking my sister away? 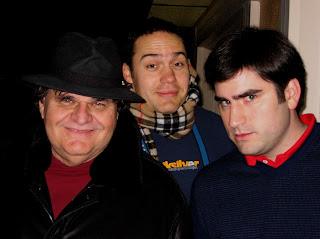 Her days long and tiring, Wendy dropped into bed early in order to rise before dawn and bake the next cake. Bored, I hovered in the kitchen lapping up dessert crumbs when André came in. “Hey.” “Hey”. Those were the only words my new nephew, three years my junior, and I had ever spoken.  Then he broke the ice. “Would you like some ice cream?” I’m more of a salty gal, but I couldn’t pass up the offer for some company or the opportunity to get to know this new part of my family. “I’d love some.”
We sat for hours discussing Star Wars, André and I both anxiously awaiting the prequels. I listened rather clueless to his many concerns about China. He shared his interest in war history. As an Art History major, I shared my descriptions of artists such as Delacroix and Leutze, who painted history for me. We became friends. 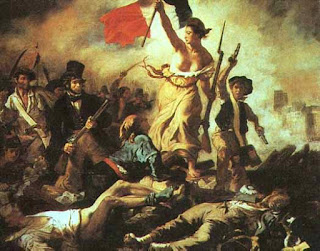 In the years since my fleeting moment of boredom in Wendy’s Lafayette kitchen, the honeymooners’ booming business moved them to New Orleans. Jacques earned a law degree and operates the thriving George Rodrigue Foundation of the Arts. André continues to pursue knowledge in all forms, and is known as a won-ton whiz at his Lafayette restaurant, the Blue Dog Café, co-owned with his brother. And, as luck would have it, my husband and I were blessed with two boys. 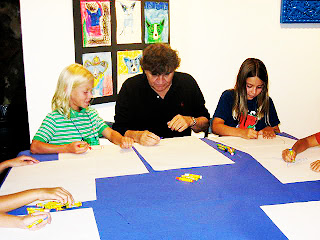 My boys are visiting Aunt Wendy and Uncle George this week, attending art camp at the Foundation while my sister and I plan our 4th of July festivities and she completes tasks for the upcoming Baton Rouge exhibition. Because we want her to play by the pool and join us for an airboat ride, I’ve attempted to lighten her load with this post. Please don’t hold it against her.
Heather
Note from Wendy:  Many thanks to my sister Heather for lightening my load with a guest post!  You can follow her regularly at her blog, Adventures of a BMX Mom
I did manage to post for Gambit this week.  I hope you enjoy 'A Muddled World,' the crazy account of my search for a stranger in a Thibodaux shelter following Hurricane Katrina
Now, if only I can get my LSU Museum work done in time for the airboat ride.........