A Number One Tiger Fan

From his earliest commission, a valuable lesson at age fifteen when the funeral home director Mr. Burgess refused to pay the agreed-upon fifty-dollar price for his portrait, George Rodrigue tossed around the pros and cons of outside projects.  Everyone has an idea, most well meaning but ill advised.
Human nature requests the obvious, and George understands as well as anyone that nothing happens without trying.  Ultimately it is George, however, who faces decisions based on his concept of ‘legacy,’ whether artistic, financial, cultural, societal, familial, philanthropic or otherwise.  It is up to George to remain true to his vision. 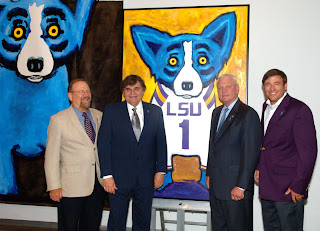 (click photos to enlarge.... Thomas Livesay, Director of the LSU Museum of Art; Artist George Rodrigue, Founder of the George Rodrigue Foundation of the Arts; General Ronald Richard, President and CEO of the Tiger Athletic Foundation; Todd Graves of Raising Cane's)
But every once in a while a plan comes along that enhances not only George Rodrigue’s long and short-term goals, but also those of others.  Of course he thought in the past of painting the Blue Dog wearing an LSU jersey; however, he worried about his image, about endorsement and commercialization.

“It didn’t take a brain surgeon to figure out that the jersey was perfect.” – G.R.

That nagging concern, ironically, resulted in a fund-raising phenomenon in 2003, when a group of LSU students, including George’s son Jacques Rodrigue, showed concern for their mascot’s living conditions.  They approached George for help, hoping for a related Blue Dog print. 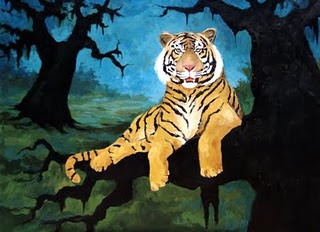 George, however, painted Mike The Tiger.  He avoided using the Blue Dog, because his gut told him to wait.  In hindsight, it was a good call, and sales from prints of Mike the Tiger raised more than $1 million, building Mike a large and elaborate habitat on the LSU grounds.
Yet George, a huge LSU fan, knew he held a prize, an image of the Blue Dog that not only appeals to thousands of LSU students, alumni, and fans, but also benefits, through our foundation and others, thousands of Louisianians, whether connected to the university or not.

“The excuse to finally produce this print comes from raising money for an important cause, money we can put to great use immediately.” – G.R.

In 2011, George Rodrigue teams up with the Tiger Athletic Foundation (TAF), The Louisiana State University Museum of Art (LSU MOA) at the Shaw Center, and the George Rodrigue Foundation of the Arts (GRFA) to raise money for education and the arts in Louisiana.
This ambitious fund-raising project coincides with a statewide touring exhibition of original Rodrigue artwork, a series of shows scheduled by the New Orleans Museum of Art based on the museum’s large Rodrigue collection, as well as the success of its 2008 retrospective on the artist.

The traveling exhibition started in the summer of 2010 at the Slidell Cultural Center, followed by expanded versions at the Imperial Calcasieu Museum in Lake Charles (detailed along with an insane week of events here) and the Masur Museum in Monroe (story here), as well as a related exhibition of Rodrigue’s Saga of the Acadians at the Alexandria Museum of Art (on view until July 1 and detailed here). 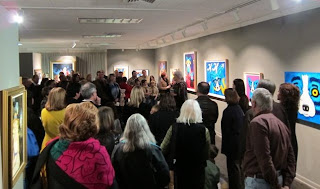 The tour culminates with two large-scale exhibitions in Baton Rouge (at the LSU Museum of Art, July 23 to September 18) and Shreveport (at the Louisiana State Exhibit Museum, September 23 to December 30), both enhanced with paintings from local collectors and Rodrigue’s personal archives. 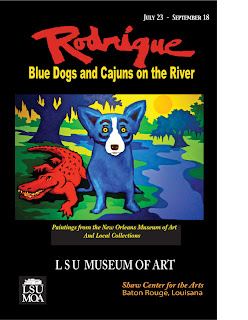 (pictured, the exhibition poster for “Blue Dogs and Cajuns on the River,” July 23 – September 18 at the LSU MOA at the Shaw Center, Baton Rouge; for more on this image visit here)
In addition, these shows spotlight sculptural works, including Cajun bronzes from the mid-1970s, large-scale steel, aluminum and chrome Blue Dogs, and unique works of furniture and other three-dimensional items created in 2011 specifically for these exhibitions. 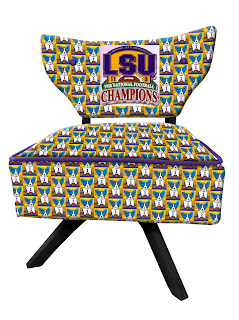 The Baton Rouge LSU MOA exhibition is the first time all five of Rodrigue’s Louisiana Governor’s portraits hang together.  Also included is the first Blue Dog painting, the original painting of Mike the Tiger, the complete Saga of the Acadians, a selection of memorabilia chosen by Rodrigue for this exhibition, and more than seventy original works of art ranging in date from 1969 to 2011.
The exhibition’s highlight in both Baton Rouge and Shreveport is the original 6x4 foot painting, A Number One Tiger Fan, on loan from Rodrigue’s personal collection. 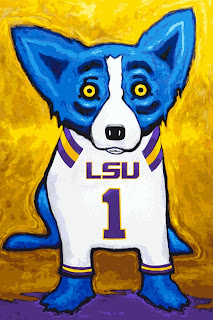 Signed silkscreen prints from this painting went on sale this week exclusively at the LSU Museum of Art gift shop and at www.arts4education.org, continuing until January 1, 2012.  All proceeds benefit arts and education programs sponsored by the Tiger Athletic Foundation, the LSU Museum of Art, and the George Rodrigue Foundation of the Arts.

“Clearly,” says George Rodrigue, “the timing was right for this print.  Through my new foundation I use the proceeds to provide scholarships, art supplies and a wide-range of support to Louisiana’s arts programs.

“The image itself raises two distinct memories:  LSU as national champions in 1958 and again in 2004.  I watched both games from the stands, and along with the Saints Super Bowl victory of 2010, they are for me the greatest football moments ever.” 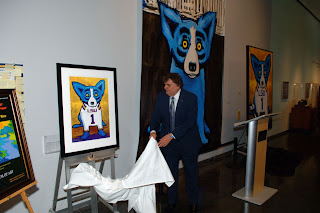 Related LSU MOA events with the artist include lectures, painting demonstrations, children’s workshops and more, detailed here.
I hope to see you all in Baton Rouge this summer and in Shreveport this fall.  Thank you, Louisiana!
Wendy
To purchase the signed silkscreen, A Number One Tiger Fan, visit www.arts4education.org

For a related article from the Baton Rouge Advocate, visit here

Visit here for a list of lectures and other events with George Rodrigue at the LSU Museum of Art this summer
With special thanks to the New Orleans Museum of Art, LSU alumnus Todd Graves, Raising Cane’s, Forum 35, the Blue Dog Café, Chef Paul Prudhomme, the Shaw Center for the Arts, and the Baton Rouge Hilton Hotel
Fun on the road with George Rodrigue in this week’s post for Gambit, “Breakfast at Lea’s Pies”
Please join me on twitter this month, as I share photographs and vignettes from George Rodrigue’s studio in Carmel, California