George Rodrigue and I are in Las Vegas this weekend, enjoying a three-day vacation before the much-anticipated, happy chaos of the upcoming Baton Rouge exhibition, opening July 23rd with a series of events at the Louisiana State University Museum of Art.
For that reason, I’m keeping my blog light-and-easy, with mostly pictures and a few oddball thoughts/quotes.  Truth is I’m focused on an upcoming Gambit post, titled something like, “Why Art Doesn’t Work in Las Vegas.” 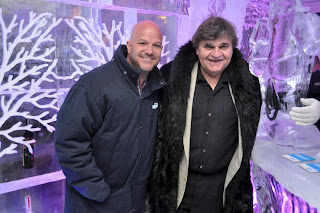 Unlike the working title, it’s a positive post, detailing artistic wonders just off of the Strip, like the new Frank Gehry-designed Lou Ruvo Center for Brain Health, as well as our short spurts of adoration for the fake and over-the-top, beginning with a fun visit last night to the Minus 5 Ice Bar, where we met up with their Director of Operations, my high school classmate Noel Bowman (pictured above with George; be sure and click to enlarge). 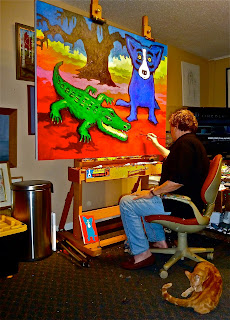 In the meantime, I share with you photographs of George’s latest masterpiece, Gator Aid, a four by six foot canvas now on view in the Rodrigue Gallery, New Orleans, a painting and title he describes as follows:

“Most people think of an alligator as a dangerous and spooky swamp creature; but in certain situations in life, people need a gator to come to their rescue or aid.  There are plenty of times when a gator in my back pocket, or gator boots, or a gator belt have helped me out.”

I insisted he get serious.  He continues...

“I grew up in New Iberia with a swamp in the city limits, and we had small, small alligators.  I never saw a large one until 1955 at City Park in New Orleans.” 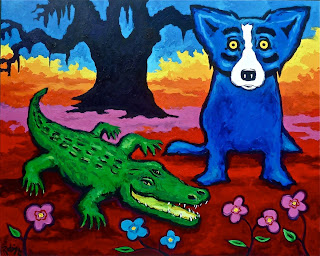 But what about the entire painting (click photo to enlarge), I asked.  Why the flowers?

“I love flowers, and I love gators.  I love oak trees and Blue Dogs.”

As I said, we're on vacation.  Obviously avoiding a discussion of style, George shared a story instead:

“In 1980 my Catholic High buddy Ed Vice and I went fishing on Marsh Island.  We left at 4:00 a.m. so we could catch the fish before everyone else.  The day started off bad when, on the way to the dock, we ran out of gas.  I remember that it cost me a fortune -twenty bucks- to pay the gas station guy."

"In the swamp, I half-slept, flat on my back in the boat, watching the sunrise while Vice drove.  As I studied the sky, I noticed that my view circled the same clouds again and again.  I stood up and realized Vice was gone. I controlled the spinning boat, turned off the motor and started yelling.

'George I’m over here next to the bank!' he called.

"Immediately I saw it:  a big gator sunned himself not ten feet away from my friend. Vice squinted at me, near-blind, after losing his glasses during his fall from the boat.

I never told him about the gator, afraid he might panic, and I had no idea where we were or how to get back. Vice couldn’t see four feet in front of him.

"It took two cans of gas and seven hours, but I found our way to the port of New Iberia.  We never did fish.

"So every time I paint a gator, no matter what the color, I remember Vice who could have gotten eaten by an alligator on Marsh Island.” 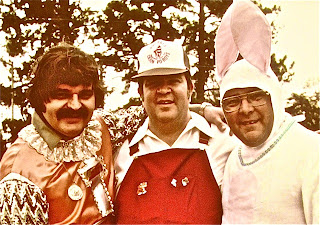 (pictured, George Rodrigue with his buddies Ray Hay and Ed Vice, Lafayette, LA 1980; both men were the subject of many Rodrigue paintings over the years; see the posts under 'Cajuns' to the right of this story)


There’s your story, the same one told to me as we flew to Las Vegas yesterday and recounted again as I practiced yoga this morning.  Admittedly, it leaves style behind; but I’ve written about George's style many times in the past (here’s a good example); and frankly, it's pretty good storytelling-style.....and I’m lucky to be posting at all. 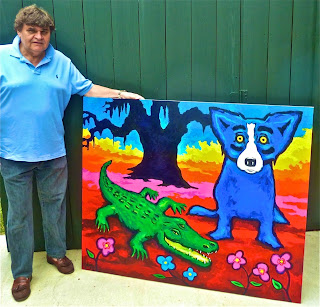 In addition, in following my stat counter recently, I’m alarmed at how many of you find my blog by googling ‘nude swamp women.’ Heavenly day! (Visit the culprit, "Swamp Women," if you dare, here).
George, however, thought this was a kick and insisted that we not disappoint.  Presenting.... "Swamp Lady," a new design for the series Bodies*, by George Rodrigue (click photo to enlarge). 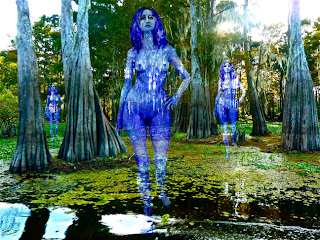 Finally, I leave you with a photo of another recent alligator painting, as it was installed this week at the LSU Museum of Art for their upcoming Rodrigue exhibition, July 23 – Sept 18, 2011.  For more on both the painting and exhibition visit “Blue Dogs and Cajuns on the River.” (again, be sure and click the photo to enlarge) 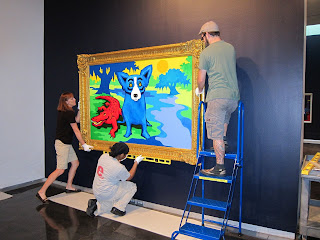 For a list of events in the coming weeks with George and myself at the LSU Museum of Art, visit here.  We’d love to see you!
Wendy
*For more on George Rodrigue's series, Bodies, see the posts "The Nude Figure" and "The Art of Modeling"
For some summer fun I hope you also enjoy “Summer in Louisiana:  BMX, Swamp Tours and Art Camp” from this week’s Gambit’s Blog of New Orleans