The Spirit of the Next Hero

This week George Rodrigue unveils his large-scale painting The Spirit of the Next Hero, on view for the first time since he painted it in 1985 as the official poster for the National Sports Festival, an annual event renamed the U.S. Olympic Festival the following year. 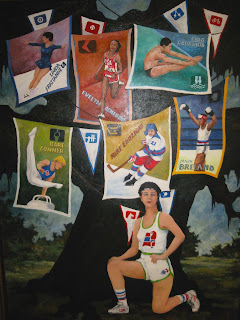 Held during 1985 in Baton Rouge, the event is “more a festive celebration of sports than a hard-edged competition.  ‘This is a fun event,’ said diver Greg Louganis, who won two gold medals in Los Angeles and is one of the celebrity athletes competing at Baton Rouge.  ‘This is a relatively relaxed competition.’” (Sports Illustrated, August 5, 1985) 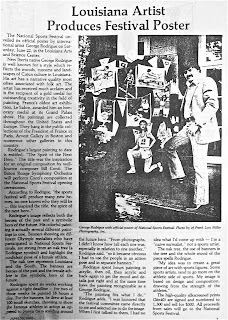 (pictured, George Rodrigue photographed by Frank Lotz Miller for the Morning Advocate)
Named for composer (of Rocky theme-song fame) Bill Conti’s original composition “The Spirit of the Next Hero,” Rodrigue focused his painting on the Olympic gold medal winners, represented on banners hanging behind, and the spirit of the future Olympian, in this case a confident female athlete. 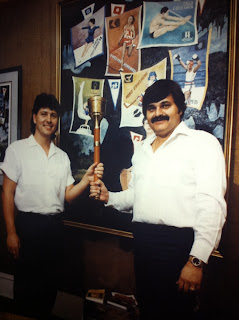 Silkscreen prints from the painting benefited the National Sports Festival. 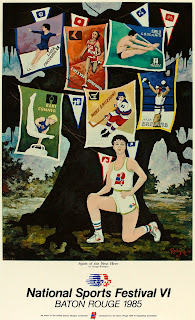 “The painting fits what I do,” said Rodrigue in 1985.  “I was honored that the festival committee came directly to me and selected me to do the image.  When I first talked to them, I had no idea what I’d come up with --- I’m a ‘naïve surrealist,’ not a sports artist.”

Originally the painting and print were unveiled at a gala event in Baton Rouge at the Louisiana Arts and Science Center, kicking off the 1985 festival with the visiting athletes.  Rodrigue signed prints during the evening as his friend Chef Paul Prudhomme served his signature dish, blackened redfish. 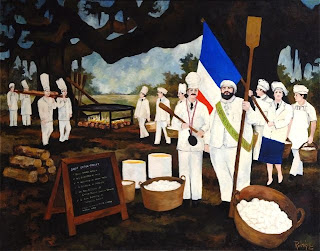 Not to worry if you missed that event, because you have another chance on August 20th 2011 when Rodrigue and Prudhomme once again present together in Baton Rouge, this time at the LSU Museum of Art during the exhibition “Blue Dogs and Cajuns on the River,” featuring Prudhomme in Rodrigue's Great Cajun Omelet (pictured above and detailed here).
Through a series of circumstances and generous patrons, the George Rodrigue Foundation of the Arts obtained the inspiring painting, The Spirit of the Next Hero, for its new education center at 747 Magazine Street in the New Orleans Arts District.  This Saturday, August 6th 2011 we unveil both our center and the painting during White Linen Night, an annual arts event sponsored by Whitney Bank and benefiting the Contemporary Arts Center. 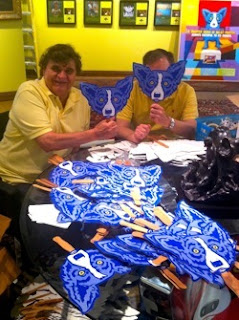 (pick up a free Blue Dog fan during White Linen Night; more info here)
The painting joins other Rodrigue portraits, including authors Walker Percy and Shirley Ann Grau, along with a self-portrait of Rodrigue with political analyst Gus Weill.  In addition to the portrait room, the center includes large-scale Cajun works such as Louisiana Cowboys and the Fais do-do, as well as an entire room of Hurricanes and important Blue Dog works from the Xerox Collection. 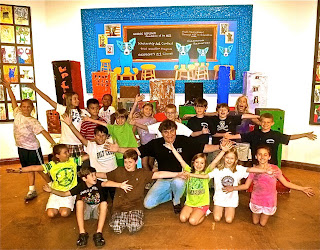 The education center is a focus of activity for the George Rodrigue Foundation of the Arts (GRFA), including both student and teacher workshops, as well as our annual scholarship contest, print donation program, and George’s Art Closet, providing art supplies to schools.
The original paintings star during White Linen Night this weekend, however, as canvases such as The Spirit of the Next Hero, usually reserved for storage or museum loan due to their size, finally hang on permanent public view. 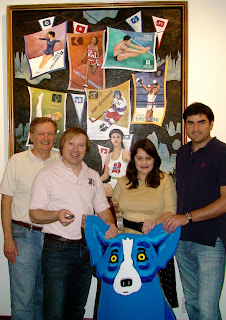 George and I hope to see you at 747 Magazine Street, near Julia Street, for a tour of paintings and programs this Saturday during White Linen Night and again next weekend at the Rodrigue Gallery in the French Quarter for Dirty Linen Night.  Come on out and support the arts.  It's a great time!
Wendy
-pictured above, the GRFA staff:  Wayne Fernandez, Gus Anderson, Marney Robinson and Jacques Rodrigue
-also in honor of White Linen Night, I hope you enjoy “The Artist’s Inspiration” for Gambit’s Blog of New Orleans