In 1979 George Rodrigue loaned twenty of his Cajun paintings for use in Talk About Good II, a cookbook produced by the Junior League of Lafayette, Louisiana.
The paintings introduce the book’s chapters and include dinner scenes, seafood preparations and Cajun characters, each complemented by Rodrigue’s brief descriptions. 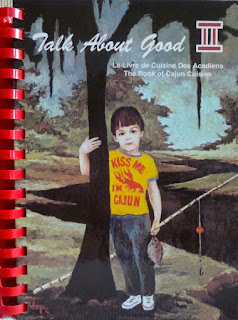 Rodrigue writes about the cover, Kiss Me I’m Cajun:
“This is a portrait of my son, André Rodrigue, after his first fishing trip.  André in his t-shirt typifies the contemporary Cajun.  But at four years of age, he does not yet know that the whole world does not have boudin, crawfish, gumbo, and Mardi Gras parades.”
(for more on Kiss Me I'm Cajun, see the post “The Rodrigue Brothers”)
Originally the painting A Toast to Cajun Food (from the collection of the University Art Museum in Lafayette) graced the cookbook’s cover; however the Junior League swapped the front and back covers for the newest edition. 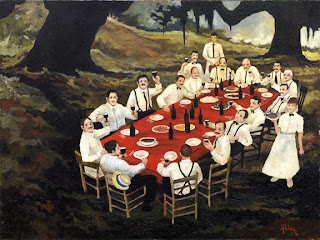 “Cajun food reflects a way of life,” writes Rodrigue.  “Shown here is a traditional all-day feast which reflects the ‘joie de vivre’ which the Cajuns have kept throughout their history.  They toast a good life and good food and the land they have come to love in South Louisiana.”
(for more on Rodrigue’s paintings of Gourmet Dinner Clubs, see the post “Aioli Dinner.”)
Within the cookbook, paintings such as Ray Hay’s Cajun Po-Boys introduce the Meat Chapter, opposite a page dedicated to ‘refrigerator,’ ‘watermelon,’ and ‘mirliton’ pickles.
--click photos to enlarge-- 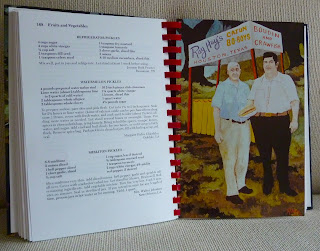 “This painting portrays Ray Hay holding his Cajun Po-Boy sandwich, and beside him is Bud Petro of Lafayette, Louisiana.  The two are discussing one of the new items on the menu, Petro’s juicy fried rabbit.  The preparation of the rabbit is so secret, that Mr. Petro was flown in to Houston to teach the cooks how to prepare this Cajun delicacy.” – G.R. 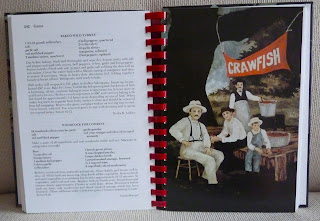 Selling Crawfish at Butte La Rose introduces the Seafood Chapter and appears opposite recipes for “Baked Wild Turkey” and “Woodcock for Company.”
“This painting,” writes Rodrigue, “shows the early days when it was far easier to give the crawfish away than to try to sell them.”
My personal favorites within this book are George’s paintings of Cajun characters, such as his good friend Rodney Fontenot, The Ragin’ Cajun, a man who, according to George, had “no difficulty in finding his identity in a town of 6,000, almost 4,000 with the name of Fontenot, none claiming to be related to the others.” 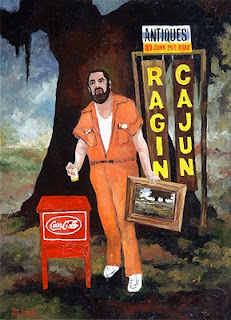 As with the Gourmet Dinner Clubs, The Ragin Cajun deserves its own blog post, and I encourage you to read that history, linked here.
Rodrigue donated the use of his copyrights for the Talk About Good II cookbook, so that it might raise funds for the Junior League of Lafayette, “an organization of women,” according to their website, “committed to promoting voluntarism, developing the potential of women, and improving the community through the effective action and leadership of trained volunteers.” 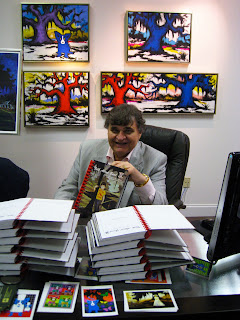 Thirty-two years later, both the recipes and paintings hold up, and Rodrigue remains committed to this worthwhile hometown cause.
Wendy
For a related post, I hope you enjoy “A Sophisticated Gumbo,” in this week’s Gambit’s Blog of New Orleans, featuring paintings of Cajun food by George Rodrigue
To purchase Talk About Good II and other Junior League of Lafayette Cookbooks, visit their book order page

Posted by Wendy Rodrigue Magnus at 9:31 AM