A Cajun in California

It was ten years ago that George Rodrigue built his studio in the hills of Carmel Valley, California.  Since that time, although we live most of the year in New Orleans, ninety percent of his work comes from this peaceful home on the West Coast, an escape from everything but nature and painting. 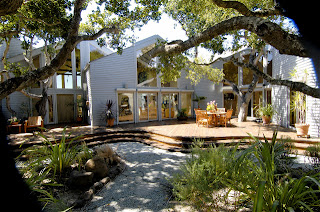 It was in this studio that he painted God Bless America on the night of September 11th, 2001.  He conceived of and painted both the Hurricanes and Bodies Series on this hill.  And it was here that he spent most of 2009 painting an historical tribute to the ‘men who won the war,’ Eisenhower and Higgins, a large-scale commission for the National World War II Museum. (pictured below unfinished, and detailed in a Veterans Day post next month) 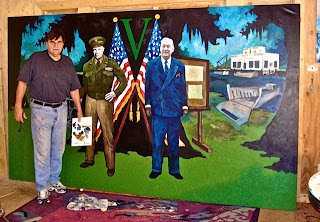 (Pictured, George Rodrigue on Highway 1 near Malibu while attending the Art Center College of Design, 1966) 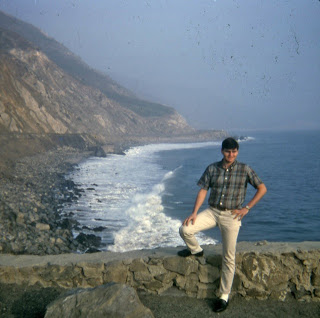 “I first fell in love with California when I went to art school in Los Angeles.  It was exciting because of the new art coming out of that area.  I discovered the Monterey Peninsula early on.  The little town of Carmel-by-the-Sea was full of artists and had a large concentration of studios and galleries.

“I loved the idea from the beginning of one day painting in Carmel and showing my art.  Thanks to the success of the gallery in New Orleans, I fulfilled that dream twenty-five years later.” 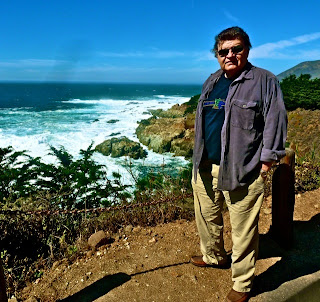 This year the Rodrigue Gallery in Carmel, California celebrates its twentieth year.  We moved recently to a larger location two blocks from our old one, described as the West side of Dolores between Ocean and 7th, in a town without addresses. 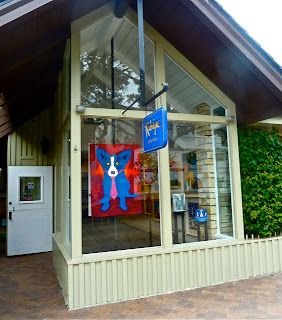 I worked at the Carmel gallery, then known as Galerie Blue Dog, for six years in the early 1990s, returning to Louisiana when George and I married.  Along with my co-workers, Sandra Crake (now in New Orleans) and Mary Threadgill (still in Carmel), we enjoyed the exciting early Blue Dog years, including lines at the door following our grand opening, thanks to George’s long-time friend Chef Paul Prudhomme, who cooked Cajun food in the gallery for the town.

We celebrated together when the Blue Dog landed on the front page of the Wall Street Journal.  We appeared out of business for months (and we raised prices) as George painted inventory following the buying frenzy accompanying his Absolut art ads.  We introduced the seaside community not only to a Cajun artist and Cajun food, but also to Mardi Gras, the Saints, and LSU, with related paintings, parties, and decorated windows. 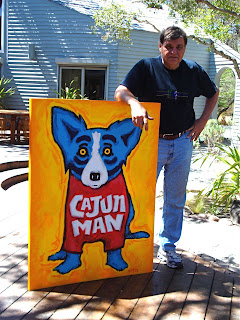 This year we hired a California native who worked for many years at a nearby gallery.  Jenny Johnson made her first trip ever to Louisiana this summer, where she visited not only George’s gallery, but also “Blue Dogs and Cajuns on the River” at the LSU Museum of Art, the Blue Dog Café, and our new GRFA Education Center.

“After twenty years,” writes Jenny, “I see a new generation of children who know the story and love the Blue Dog.  They bring their parents in the gallery and share the art and history, because they’re learning it in school.  With his love of painting, George has inspired countless young artists to follow their hearts and dream big.” 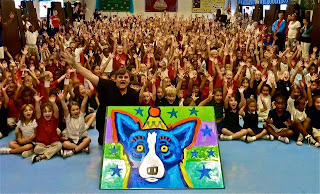 Last week we secured a major George Rodrigue exhibition (Fall 2013) at the National Steinbeck Center.  John Steinbeck was born and raised in Salinas, a city where he remains controversial, even fifty years after his death, especially among the established agricultural families.

"We’re defined by the 'lettuce curtain'," more than one person explained, a term that jolted me with its divisiveness, historical significance, and possible political incorrectness - and yet the perfect way, maybe the only way, to describe the mere 17 miles (ironically) between the field workers of Salinas, California and the golf-playing elite of Pebble Beach (or similarly, our fairytale world in downtown Carmel). 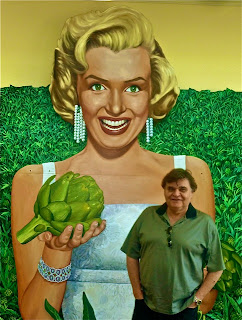 (On our first date, George, photographed last week at the Steinbeck Center, shared his fascination with Marilyn Monroe, then Norma Jean, as the first Artichoke Festival Queen in nearby Castroville in 1948; on the date, we sat in a biker bar three miles away in the tiny town of Moss Landing)

For George Rodrigue and our Foundation, this is the perfect opportunity for a major exhibition in central California, as well as education outreach with the Arts Council for Monterey County.  George is already working on concepts for large-scale new paintings, which may be his first works ever truly inspired by California.

The state is second in George’s heart only to Louisiana, and we look forward to exploring connections between Steinbeck and Rodrigue ---- one having preserved his culture in words and the other in paint.  Like Steinbeck’s stories, George’s Cajun paintings were controversial from the start. 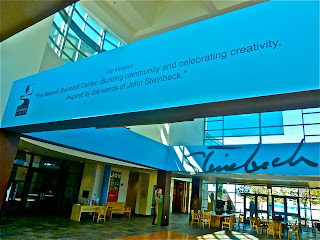 That said, I recall a reporter who interviewed George not long after we moved to Carmel.

“Now that you’re painting in California, are you inspired by the lone cypress, by the hills, or by the beach?”

George looked at him and laughed.

“Why would I paint those?  My landscape is in here,” he explained, with his hand on his chest, “and that’s always Louisiana.” 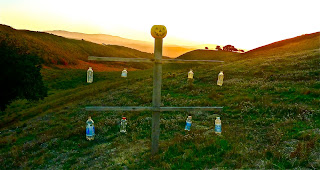 --please join me on facebook for more photos and discussion