I Ain’t No Cartoon Dog

The Blue Dog is not a cartoon.  It is a shape that interacts with other shapes, not characters, all according to George Rodrigue’s artistic eye. There are no speech bubbles coming from its mouth.  Although it delivers a message, its exchange is a silent and mysterious communication between its golden saucers and our eyes. 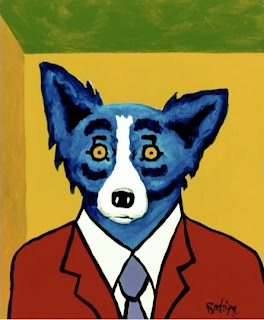 (pictured, I Ain’t No Cartoon Dog, 1994, acrylic on canvas, 24x20, click photo to enlarge)
Furthermore, the Blue Dog is not a dog.  It has no backside (making sculpture challenging).  It doesn’t run or bark or chase its tail.  It doesn’t sit at our feet and look up; rather, it stands human-size, staring straight-on. 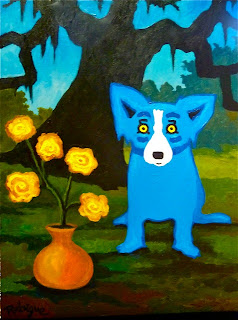 (pictured, Flower Ann, 2011, acrylic on canvas, 24x20)
From the beginning, I watched George struggle, almost without care, to define his creation.

“What does it mean?” asks the public.

Yet his answers are as varied as his paintings, shifting from the loup-garou in early years, to memories of his studio dog Tiffany, to a symbolic leap from his painted Cajun past, to pure, undefined abstract form. (See the links above, and more under ‘Blue Dog’ to the right of this post)
Ironically, Rodrigue embraces the cartoon-in-art, especially Pop Art designs such as Andy Warhol’s Superman or Roy Lichtenstein’s Comic Strips.  As an art student in Los Angeles, young George painted Pop Goes the Ads (1966, below), a 4x6 foot mixed media on plywood that hangs in his studio today.
-click this photo and others to enlarge- 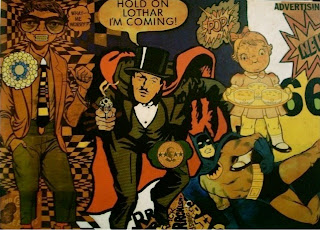 The Blue Dog, however, is not Snoopy; nor is it a Pop Art reference to the comics, as in the examples above.
A cartoon-Blue Dog analogy is no more relevant, nor appropriate, than associating Rodrigue’s Cajuns (excepting the Portraits and Saga) with specific people and events, or his oaks with actual trees.  Yet these misinterpretations have haunted George since his earliest landscapes, when local critics, blind to his strong shapes and symbolism, described his work as “dreary and monotonous.”
(pictured, 1970; read more about George's critics here) 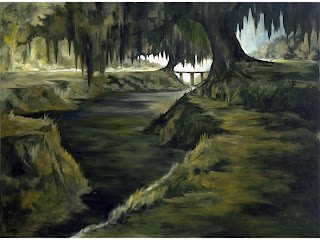 Even the New York advertising agency Young and Rubicam first approached Rodrigue for their client Xerox with designs that included speech bubbles at the Blue Dog’s mouth.  As a result, George nearly missed this opportunity, rejecting their offer until they convinced him that they understood his art. (See the Xerox Blue Dog paintings and read the story here). 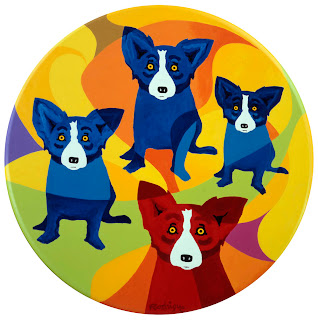 (pictured, Consequences, 2002, 48 inch diameter)
From the beginning, whether Oak Trees, Cajuns, Hurricanes, Blue Dogs or Bodies, George Rodrigue’s art remains powerful and distinctive because he has unique ideas and approaches them abstractly.  It’s the secret to his paintings.  He doesn’t see a tree, a person, or a dog.  Rather, he sees shape, design and color as he tackles each canvas world.
The entire painting becomes the subject, without negative space, as in this 1992 painting from the Evangeline Series. 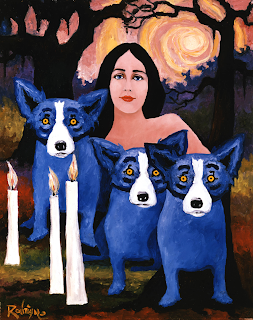 It’s not what he paints, but rather how he paints that explains why Rodrigue’s Cajun paintings appealed from the beginning to collectors outside of Louisiana.  (See the essays under ‘Cajuns’ to the right of this post.)
This same idea also explains why a simple Blue Dog exists as not a cartoon, but rather an artistic phenomenon. 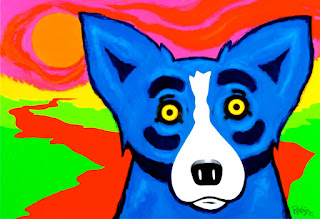 Wendy
*please join me on facebook for Rodrigue photos, paintings and nostalgia, linked here
*pictured above, At the Head of the Red River, 2011, 48x72