The Secret of Pirate Lafitte’s Gold

“O’er the glad waters of the dark blue sea,
Our thoughts as boundless, and our souls as free,
Far as the breeze can hear, the billows foam,
Survey our empire and behold our home!"

By 1974 George Rodrigue pursued a unique, self-invented style of American genre painting, typified by hard edges and strong designs.  He interpreted the landscapes and legends of the Cajun culture with expressive symbolism.  His oak trees are abstract shapes forming the uppermost border of a bright sky, reinforcing positive shapes and patterns in his stylized canvas world. 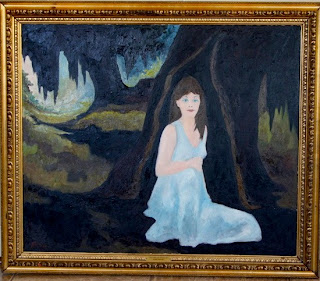 The mysterious woman in The Secret of Pirate Lafitte’s Gold (1974, 30x36) guards a treasure hidden within the hollow of the tree.  Conflicting tales of Jean Lafitte and his gold abound, and for years treasure hunters dug up islands and, at one point, drained a lake, in search of the booty.
Far from the terrifying reputation of today’s pirates, Jean Lafitte resembles in legend (forgive me) Jack Sparrow, in his relentless pursuit of treasure, freedom, and the ‘winning side.’  He gained a reputation beyond thief and smuggler, known for sparing the lives of his captives and, most famously, ensuring Andrew Jackson’s victory at the Battle of New Orleans. 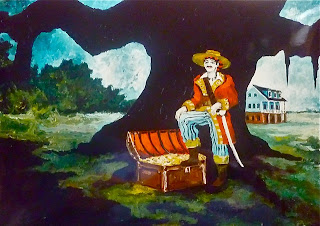 (pictured, In Search of the Gold of Jean Lafitte, circa 1983; notice Chef John Folse's famous restaurant, now burned, in the background; the painting currently hangs at Folse's Lafitte's Landing Restaurant at Bittersweet Plantation)


For their allegiance and assistance, Lafitte and his men received full pardons and generous payment, a treasure, according to a legend recounted by fishermen and trappers since the early 1900s, still buried within a large oak tree at the mouth of the Atchafalaya River.
Lafitte’s followers, however, protected the gold.  As the pirates died, their ghosts remained.  It was from this legend that Rodrigue fabricated his image, a female spirit formed from his imagination, still guarding the oak.
According to family legend, George Rodrigue’s Uncle Boutte, who married his mother’s sister, a Courrege, was a direct descendant of Pirate Lafitte.  The family spoke of the treasure often when George was a child in New Iberia.

“Growing up I remember the Bouttes complaining that by the time they find Lafitte’s gold there will be so many heirs that nobody will get much of anything.” - G.R. 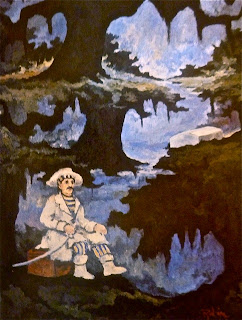 In 1984 George addressed the legend again with A Sea Chest of Secrets (40x30), painted for the book Bayou, a collection of ghost stories that also includes the loup-garou, the first Blue Dog.
The painting illustrates three periods in time.  Lafitte, still living, sits upon his gold at the edge of the river.  Mid-canvas, his grave, an above ground tomb, hides the gold beneath the same tree (although, according to popular accounts, he was wounded during a battle and buried at sea).  The top of the painting reveals no sign of Lafitte, his tomb, or the gold, reinforcing the mystery of both the pirate’s fate and that of his treasure.
Throughout the painting, the river and sky blend as one, a typical Rodrigue artifice that further blurs both the passage of time and the ambiguity of a legend.
Wendy
-please join me on facebook for more paintings, photographs and stories
-also this week, a tribute to Pablo Picasso, featuring Rodrigue’s guitar-collage inspired by the Modern master, linked here for Gambit’s Blog of New Orleans