This weekend George Rodrigue and I attended an event where the religious leader prayed for and encouraged our suffering.  We left watching carefully, unprepared at a gala for this powerful lesson, for the bus that might run us down in the street, safeguarding our empathy with broken bones or worse.

“Suffering and diminishment are not the greatest of evils but are normal ingredients of life,” wrote Cardinal Avery Dulles, just prior to his death in 2008.  “As I become increasingly paralyzed and unable to speak, I can identify with the many paralytics and mute persons in the Gospels…” 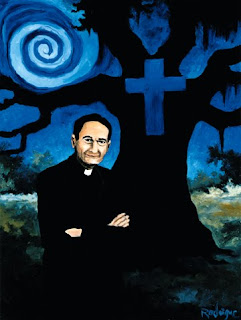 (Pictured, Rodrigue painted Father Dulles in 1990, one of ten portraits for the University of Louisiana at Lafayette’s Flora Levy Lecture Series)

Many doctrines welcome life’s hardships, because they tune us in to the suffering of others, and they make us better people. 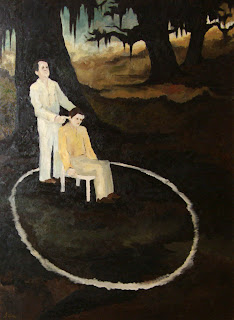 “Only the healer, not the healer’s subject, must believe,” explains George Rodrigue, as he describes his aunt, a traiteur, as in the 1974 painting of Doc Moses above.  “It’s the same for everyone,” he continues.  “We each have the ability to make a difference, but it’s our belief and compassion that make it so.”

To be clear, as a rule George admires doctors and dismisses faith healers; however, he holds a life-long fascination with the power of the mind and the mystery of the universe.  Years ago while dating, we split for several months.  Upon reconciling, our first conversation involved hours on black holes, The Big Bang Theory, and déjà vu, as though his cosmic thoughts swirled for months and somehow reunited us. 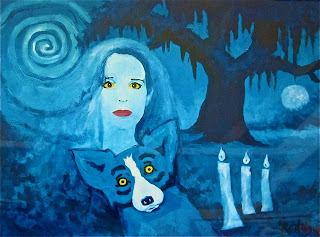 “Give me a few hours to get into the zone, to really believe,” explained George recently, “and I could be someone else.  I could be so funny that no one would recognize me.  I could be Lewis Grizzard.”

“I don’t have any out-of-body experiences,” wrote Grizzard.  “I had indeed seen a bright, beautiful light and had followed it, but it turned out to be a Kmart tire sale.”

Give me a few hours, I thought, and I could slip into insanity.  It seems easy, almost like stepping off a mountain or, lest my sister worry, from a sidewalk into the grass, into freedom --- from cynicism, from suffering, from responsibilities, from guilt (both mine and others in all cases).

“Nothing in life is fair,” our mom used to say, followed closely by “I’m sorry girls, but Christmas will be grim this year.”

Heather and I, however, rolled our eyes, because Christmas was never grim.  Whether new or used rollerskates, the pompoms (for the skate-toes) were handmade and hot pink (in my case), and the latest or last year’s Kermit or Miss Piggy, the perfect stuffed companion (in my sister’s). 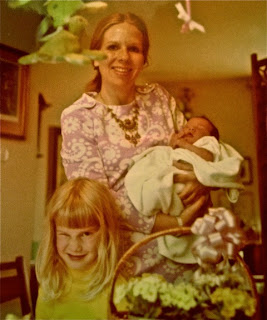 I think often on scenes from my childhood.  I recall once sharing a joke from school with my mother and baby sister at the dinner table.  Ethiopian jokes were popular at Longwood Elementary School in Shalimar, Florida in the mid-1970s, and I laughed with a mouthful of pot roast, repeating the latest trendy mockery of a starving people.

My mother, who laughs with joy in my memories, wasn’t smiling that day.

“There is nothing funny about another person’s pain,” she said.

But they can’t hear me, Mama; they’re in Africa!

“It doesn’t matter whether they hear you or not, Wendy Anne.”

....and I knew, by the sound of my middle name, that this lesson was very important.

I recall too, as the holidays approach, one Christmas with relatives in New Orleans.  I was ten or so and opened my new skates as though surprised, only to hear my cousin’s shriek, as she discovered her new stereo, records, an arcade-size Pac Man video game and more.

But I ran upstairs and buried my face in the guestroom pillow, ashamed of my jealousy and yet helpless to stop it.  I remember the feelings like they were yesterday, not wanting to hurt my mother, who gave us the world.  I explained through my tears, as she apologized and stroked my hair, how much I loved my skates and how I never liked Pac Man anyway. 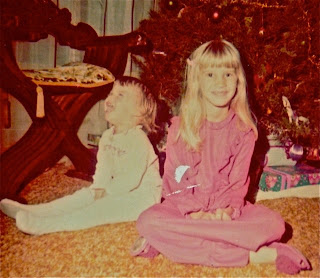 I thought of this, for some reason, last Saturday night when George woke me at 3:00 a.m., pleading that I rub his legs and shoulders --- “full of tension,” he explained, following the LSU vs. Alabama game.  Annoyed and half-asleep, I scratched his back for maybe two minutes before dozing off, all the while dumbfounded over the physical and mental trauma following a winning football game watched from a sofa.

Within an hour, I awoke again, this time to the sound of a 2009 season Saints play-off game, “the perfect thing,” he explained, “to calm my nerves.”

I almost insisted that he turn off the television, explained how ridiculous this is in the middle of the night, and reminded him that we faced a full day and had to be up in two hours.  Instead, however, I marveled quietly at this man and my life.

Oddly enough and unknown to me, he pondered along the same lines, yet in his unpredictable, unique way.  Realizing I watched him, he noted out of the blue, as the Saints kicked the winning field goal against the Minnesota Vikings,

“What people don’t realize is that all of that funny stuff you write is really me!”

-This self-indulgent dribble is for Jack Lamplough, who encourages me-

-Please join me on facebook for more paintings, photographs and discussion-