In 1950 George Rodrigue drew and colored a turkey for his parents.  On the back he wrote in a surprisingly elegant child’s script:
For Mother and Dad on Thanksgiving:
1.     Visits to chapel. 9
2.     Prayers in school. 40
3.     Decades of rosary. 27
George Rodrigue
2nd Grade 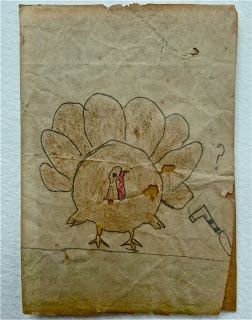 To fit the tiny picture in a frame (or possibly for some other reason), George’s mother folded back the question mark so that it could not be seen, leaving only a turkey staring at a partially hidden and therefore barely discernible ax.
I asked George about the picture.  His Isn’t it obvious? expression amused me, as I thought about a six year old boy relating to a doomed and confused turkey, while already questioning the Catholic rote.

“I remember sitting on the porch in my grandmother’s cane chair, rocking in a trance, clicking the rosary beads and mumbling incoherently, as I mimicked Tante ‘Git.  If she, the oldest of eleven children, felt this process important, then it must be.” 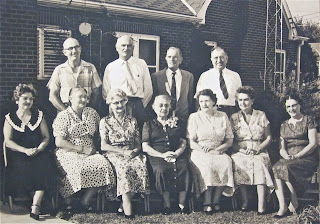 (pictured, Marie Courrege Rodrigue, seated left, with her brothers and sisters, New Iberia, 1955)
Years later, George Rodrigue remains respectful of both the religion and the tradition.  This past weekend at the Catholic funeral of his cousin Donald LaBauve in New Iberia, Louisiana, I whispered during the sermon,

“What do you think of this? The words!  The meanings!  What does this have to do with Donald?”

...as the priest explained God’s power to heal the sick and raise the dead. 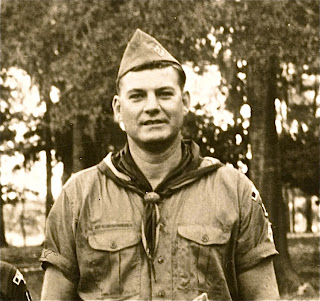 Donald LaBauve, pictured above, lived to be ninety years old.  As George’s Boy Scout troop leader, he was a father figure to the young artist.  George Rodrigue, Sr. became ill in 1958 and, according to George, “was never the same.”  One of fourteen children, George's father died in 1967, just months following the Thanksgiving photograph below.
As George and I sit down to dinner today with his boys Andre and Jacques, my sister Heather and her family, our dad, and several dear friends, I view this 1960s family scene as an enormous and poignant irony.  George views it with a nostalgic melancholy, of days gone by but not necessarily missed.
-click photo to enlarge- 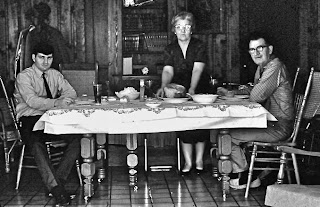 An only child, a young man in his early twenties, recently returned from Los Angeles and art school, sits at a table with his aging parents, a father ill and drifting away, and a mother consumed with her husband's care.
Somewhere in New Iberia, at the time of this photograph, are hundreds of relatives, twenty-three aunts and uncles, plus their spouses, children and grandchildren, none of which George recalls ever sharing a meal, at their table or at his parents’.

“It was a different time,” he explained.  “And there were just too many of them.”

So today, on this celebration of Thanksgiving, we are thankful for family, for being together for not only the turkey, rice dressing and pecan pie, but more so the laughter, conversation and love that come with it.  George and I wish you the same, raising our glasses to you and yours with “A Toast to Cajun Food.” 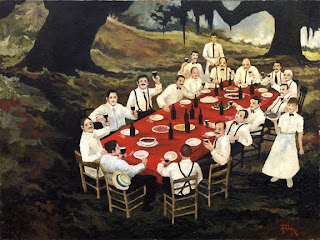 Wendy
-For more on George Rodrigue, Sr. and Marie Courrege Rodrigue, see the posts “The Artist’s Father” and “The Artist’s Mother”
-I hope you also enjoy “Dancing the Shrimp,” a story of family, seafood, and Louisiana history in this week’s Gambit’s Blog of New Orleans-

Posted by Wendy Rodrigue Magnus at 7:41 AM