Note:  Throughout this post I sprinkled images by Louisiana artists.  Some I interviewed and some not, but all are included in the book The Bicentennial History of Art in Louisiana.*  As I wrote, I thought of the text and images as two separate statements, not necessarily related.  In other words, unless specifically noted, all artist statements, whether quoted or in general, are anonymous.
Recently I interviewed artists and photographers for essays within an upcoming book* featuring two hundred years of art in Louisiana.  Although my participation is minor within this ambitious project published by the Louisiana Endowment for the Humanities, I take this assignment seriously, and I feel responsible for small slices of each legacy. 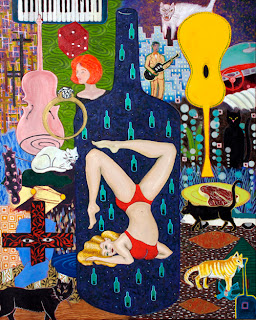 (pictured, Velma and the Diamond Ring, Francis X. Pavy, 2008; be sure and click photos throughout to enlarge-)
If you ask most non-artists, the artist’s life is an envied one, provided there's food on the table.  People often equate the creation of art with leisure, as though meeting a deadline and pleasing a boss (or agent) doesn’t count if one uses talent and personal expression to get there.
What’s more, people often judge artists based on their ability to hold out in the name of art, to resist commercialization, mass production and, in this contemporary world of video and conceptual art, traditional mediums such as modeled clay and paint on canvas.

“My agent is pushing me towards video,” explained one artist.  “But it takes so much time, and I don’t know if I have it in me.”

In between his words, I heard his fear as well.  I paint a picture over a few days and sell it for $5,000, half of which goes to my agent.  After months of work, I’ll have a video that no one will buy. 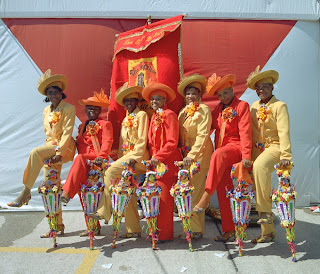 (pictured, Popular Ladies Social Aid and Pleasure Club, Judy Cooper, 2007)
Artists have bills to pay like everybody else.  They also have egos and families and goals.  They walk a line between pleasing themselves (the popular mantra) and pleasing the public (the unpopular one).  They enjoy public recognition and making money, but they aren’t supposed to admit it.
(“I don’t go after that sort of thing,” replied one artist when I asked her about awards, honors and museum exhibitions).
I heard artists explain away commissioned portraits, wedding photography, and product design, all with carefully worded and practiced lingo in an effort to dissolve my tiresome (and tacky – after all, I should know better) question, along with the age-old stereotypes. 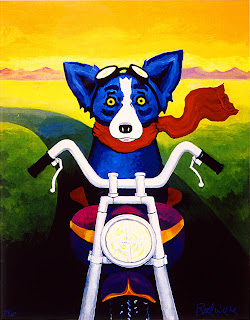 (pictured, A Faster Breed, a painting for the Xerox Collection, George Rodrigue, 2000)
Consistently I heard overlapping stories – the same frustrations regarding exhibition deadlines, out-of-date websites, and limited studio and/or gallery space.  Nearly everyone mentioned the problems of offering something affordable to the public without compromising their artistic integrity. 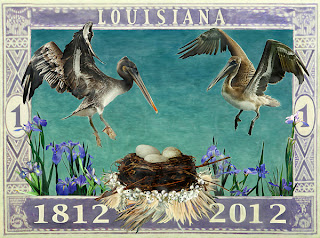 (pictured, Louisiana:  The Pelican State, Miranda Lake, 2011)
I was surprised and somewhat relieved to learn of other similarities as well, namely the widespread and accepted computer use, along with a steady interest in printmaking as an art form.  A few artists mentioned the convenience of the computer and the affordability of the prints, but nearly everyone talked of the computer as a tool, as a way to improve and edit their photographs, design compositions for their paintings or prints, and experiment with end-results before picking up their paintbrush. 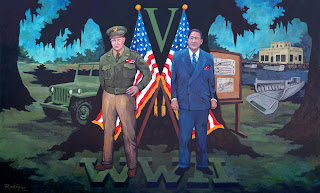 (George Rodrigue designed his painting Victory on Bayou St. John, 2009, above, using the computer, detailed here)
In addition, nearly everyone within the arts overlaps in their interests, creating a strange inability to define work versus hobby.  Painters take photographs; photographers play music; sculptors make movies; and so forth.
I noted also the solitude of these telephone interviews.  In each case, the artist sat within their studio, putting down the brush or camera to answer my questions.  I knew as we spoke that I interrupted their work, their creative train of thought, and I wondered if, in doing so, I inadvertently altered their next stroke. 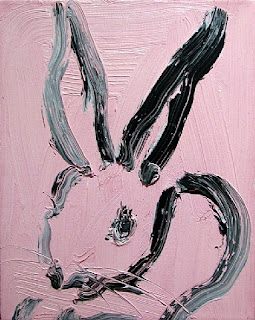 (pictured, Pink Bunny, Hunt Slonem, 2011)
But then I thought of George at his easel, whether quiet and in the middle of the night (as he prefers), or chaotic with interruptions in the afternoon (as he expects).  Either way, he moves in his own purposeful direction, influenced by life and people, but not by trends or the ideas of others.  Is it work?  I guess that depends on how one defines work.
If you’re one of the lucky few, you make money by doing that thing you enjoy the most, whether tending bar, running a computer company, or creating art.  This isn’t the sort of thing one eyes with retirement* in mind. George would say that it’s not working; rather, it’s living. 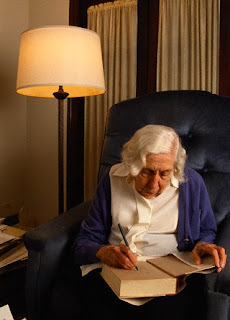 (pictured, Eudora Welty, Philip Gould, 1992)
In the end, whether the rest of us call it work or not, no one’s going to do it for them.  The artist lives a lonely, or at least an alone, if not solitary, life.  Every artist talks about new ideas and avoids complacency, all personal versions of George’s mantra, “I have to keep the work exciting for me.”
Wendy
*George’s mother died at age 103 still waiting for him to get a real job…. “with the telephone company,” she used to say.  Read the story here-
--Over the next several months, I’ll publish versions of these essays on-line with Gambit.  This week, for example, I posted a story, linked here, about Lafayette photographer Philip Gould, coinciding with his exhibition, “Louisiana Landscape and Grass Roots” (LeMieux Galleries through 12/30/11) and his recent collaboration with historian Carl Brasseaux, Acadiana:  Louisiana’s Historic Cajun Country, a book published by LSU Press, 2011
--The Bicentennial History of Art in Louisiana is a project edited by Michael Sartisky, Ph.D., President/Executive Director of the Louisiana Endowment for the Humanities and J. Richard Gruber, Ph.D., Founding Director of the Ogden Museum of Southern Art, scheduled for publication in April 2012 in celebration of the 200th anniversary of Louisiana’s statehood.  In addition, all essays appear on the website KnowLA:  the Digital Encyclopedia of Louisiana History and Culture

Posted by Wendy Rodrigue Magnus at 8:44 AM