Swamp Dogs: A Series on Metal

More than a year in the making, George Rodrigue’s Swamp Dogs combine print, photography and varnish on large sheets of metal, resulting in a unique perspective of the Louisiana landscape.
Beyond materials, however, the series originates with two stories.  Rodrigue, a Cajun artist for forty-five years, illustrates Louisiana lore including not only the loup-garou, but also, in this case, allusions to the feux follets, or swamp gas.
-click photos to enlarge- 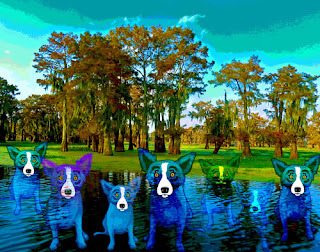 “It comes from the earth and explodes at night into large balls of fire,” explains Rodrigue.  “The Cajuns thought it was something magical – a swamp mystery they couldn’t explain – when actually it was natural gas ignited by static electricity.”

The loup-garou legend, the origin of Rodrigue’s Blue Dog, talks of a crazy wolf-type animal living in the swamp. 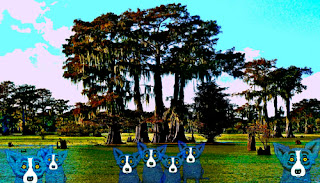 “With Swamp Dogs, I combine these mysteries, the loup-garou and the feux follets.”

Before releasing the series last month, Rodrigue experimented for more than a year, both in paint and photography, ultimately combining the two mediums within his computer.

“In the minds of the Cajuns, the feux follets was magic, but real, just as the loup-garou was mythical, but true.  To inject reality, I started with my photographs of the Atchafalaya Basin and altered them, stretching shapes and changing colors.  The loup-garou is in the water, through the water, and part of the water.” 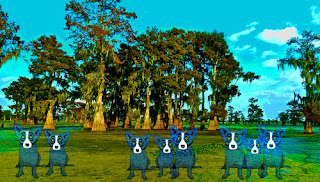 Using computer technology, Rodrigue combines his imagination with reality.  He painted several versions of the Blue Dog, scanned them into the computer, over-laying them onto his altered photographs.  He manipulated these computer collages, increasing saturation but reducing the colors to only five or six, lending varying levels of transparency. 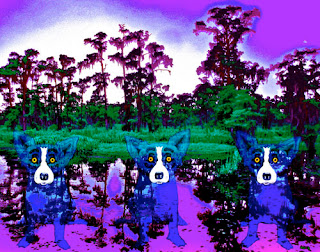 “I blended the photographs and painted imagery onto metal surfaces, using archival ink on aluminum so that parts of the metal show through, such as the dog’s nose and areas of the swamp. They appear as raw metal, as does a two-inch border around the final artwork.” 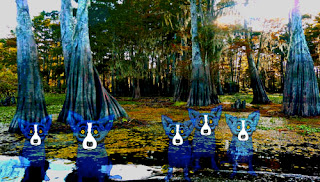 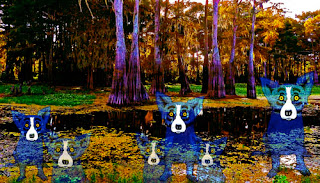 Finally, Rodrigue focuses on scale, with an average size of 3x5 feet.

“The larger the scale, the more stretched the photograph.  The metal becomes more obvious, as does the color enhancement.” 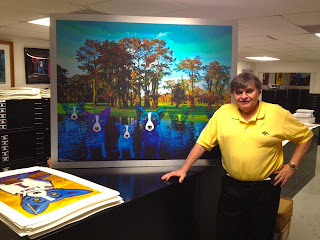 At this time, Swamp Dogs includes six versions, each an edition of 10, all pictured within this post and on view at Rodrigue’s galleries.  The computer screen does them little justice ……an irony, considering the artwork’s digital origins.  I encourage you to view these exquisite, unique works in person.
Wendy
-read about the first annual George Rodrigue Foundation of the Arts Digital Art Contest here
-new for Gambit Weekly, in honor of Louisiana’s Bicentennial, I hope you enjoy the following essays:
“The Creole Gourmet Society,” featuring George Rodrigue’s paintings of early 20th century dinner clubs, and “Cora’s Restaurant,” a look back at CODOFIL and our French heritage, including Rodrigue’s classic painting He-bert, Yes – A Bear, No