George Rodrigue makes a great King.  I hear it every year as we attend the Washington D.C. Mardi Gras, where he ruled in 1994 and still commands regal respect. 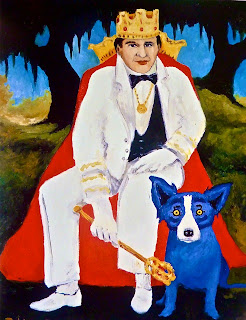 This royal interest started in his childhood, in the late 1940s.  George’s first memory, in fact, is a fitting for his King costume during New Iberia’s Carnival.

“Growing up, we never called it Mardi Gras,” he explains.  “We called it Carnival…and especially ‘Carnival Balls.’

George’s mother and his older cousin Lillian made costumes, working on them all year.  They entered George and Lillian’s daughter Arlene in the children’s carnival costume competition, which the kids won annually. 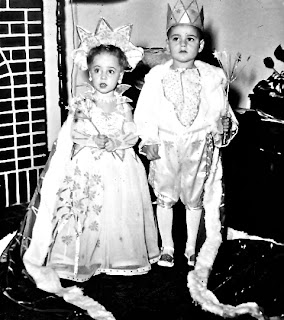 “I didn’t have a choice!” he exclaimed.

At age four or five, they dressed George as Robert Fulton (1765-1815), inventor of the steamboat.

“I remember the parade, because I rode in a mini steamboat car, pulled by two kids on foot.  Beneath my legs was a bar with a rope attached, which I pulled throughout the parade, making the paddlewheels turn.  It took two hands, which I hated, because I couldn’t wave to the crowd.”

At age ten, George was a soldier in a white satin uniform.  But more often, he was one half of a royal couple. 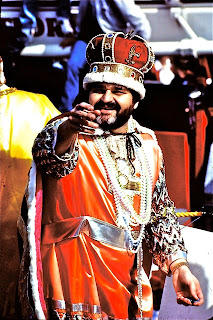 By the mid-1970s a thirty-year old George Rodrigue, now living in Lafayette, Louisiana, declared himself King.  He built a platform in front of his house on Jefferson Street, where, dressed in full regalia, he and his dog greeted passing parades. 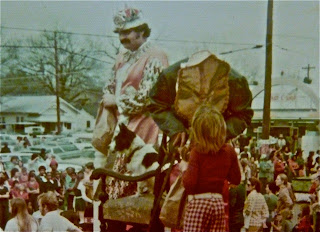 (notice Tiffany, the original model for the Blue Dog, on the royal throne. Read more about her history here-)

“I displayed a huge banner,” explains George, "that said ‘The Real King.’  Two parades passed my house on Mardi Gras Day.  The party started small - just me and Tiffany on the platform.  Within three years we had 500 people, all throwing custom-designed Rodrigue doubloons.” 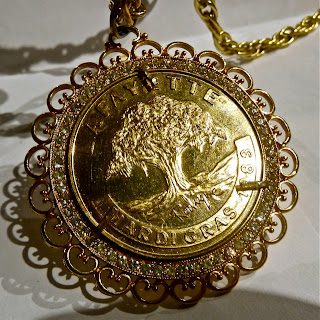 Each year, Rodrigue made a gold medallion version of the doubloon complementing his royal attire, such as the image above, based on his classic oak tree and below, based on his bronze sculpture of Longfellow, Evangeline and Gabriel. 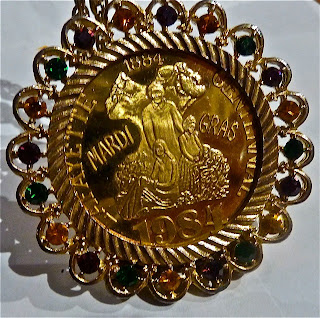 Guests arrived in costume and enjoyed gumbo and a cochon de lait.

(click photos to enlarge; pictures include George's son Andre Rodrigue and friends Dickie Hebert as Wonder Woman and Ed Vice, on the stage as a rabbit). 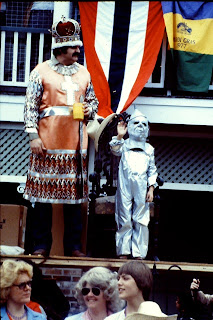 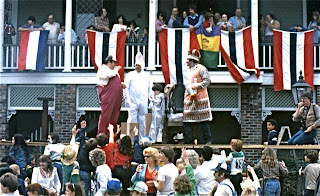 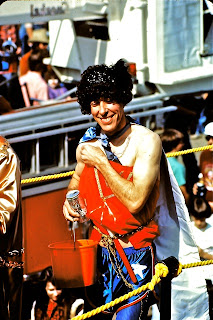 For George, the highlight each year occurred when the parade stopped at his platform, and the two kings toasted.  One year, he climbed aboard the King’s float and presented a gift, a live chicken, which caused havoc among the courtiers. 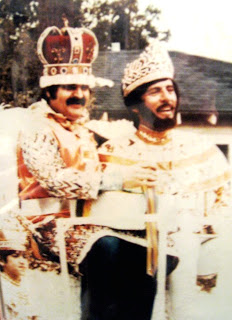 “The next year,” sighs George, “they moved the parades away from my house.”

In 1992, George Rodrigue reigned for the first time as an official King, ruling for the all-female Lafayette Krewe of Xanadu. 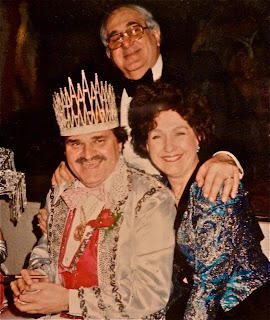 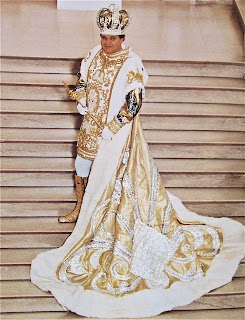 In 1994, George ruled as King of the Washington Mardi Gras (pictured above), a private Mardi Gras for 5,000 guests, hosted annually in Washington D.C. by the Louisiana Legislature.  George is still heralded as one of the best kings ever.  He broke many traditions, most famously choosing red satin drawers over the traditional white bloomers beneath his costume. 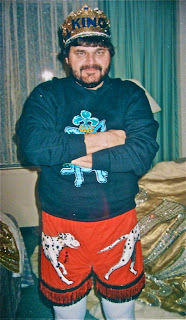 In addition to his 1994 reign, Rodrigue commemorated the DC event in a painting not of himself, but of his friend Marion Edwards, who was King in 1985 (related post here). 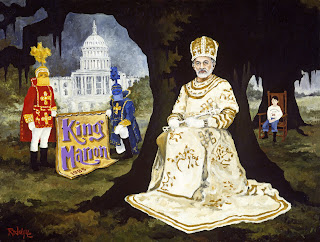 He again honored the event in 1997 with a silkscreen poster celebrating the 50th Anniversary of the Washington, D.C. Mardi Gras Ball. 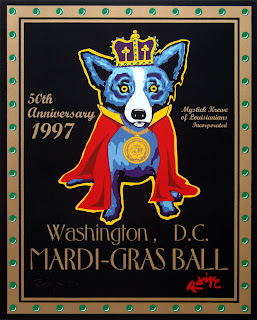 Since 1994 George has served as Grand Marshall or King for parades in New Iberia, Lafayette, Butte la Rose, Pierre Part and New Orleans.  The highlight is the Argus parade in Metairie, Louisiana, where the Blue Dog float runs each year on Mardi Gras Day.  As Grand Marshall of Argus, George threw Blue Dog doubloons. 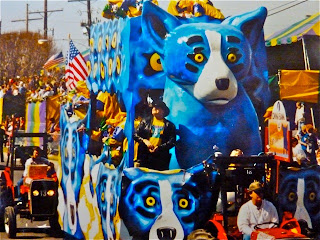 In 2004, he declared himself King once more, this time celebrating his 60th birthday.  He grew a beard for the occasion and maintained a strict dress code for guests:  Elvis “The King” or Marilyn Monroe. 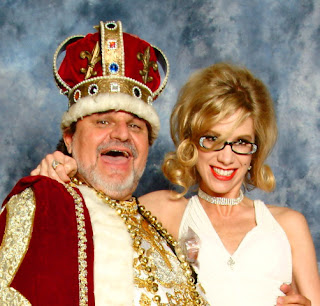 Would you be King again? I asked, not sure of his plans.

Try as I might, however, even his other half received no answer…… only a laugh. 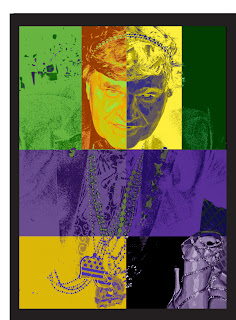 *also this week:  “MUSE-ings from a Mardi Gras Float,” a new post for Gambit, describing our incredible ride in this year’s Krewe of Muses parade, linked here-