“Creating art in a childlike manner means to be simple and direct, resulting in immediate imagery.” –George Rodrigue

Since founding the George Rodrigue Foundation of the Arts (GRFA) in 2009, George Rodrigue has visited dozens of schools and thousands of children across Louisiana, Northwest Florida and Little Rock, Arkansas.*  Through GRFA he fulfills his need to contribute to his community within the arts and education, words scarcely combined in his own childhood in 1950s New Iberia. 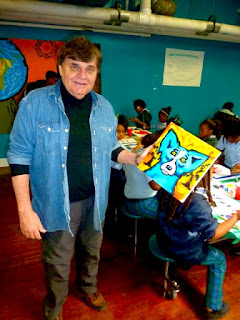 This week we visited Martin Behrman Charter School in Algiers, a city on the West bank of New Orleans.  Following a drawing lesson in Behrman's historic auditorium, the 4th grade students painted pink snakes, striped lions, and polka-dot birds with George Rodrigue.  In addition, through George's Art Closet, the class received a year's worth of art supplies.
(Susan Poag of The Times-Picayune filmed a wonderful video of George Rodrigue painting with students at Behrman.  I'm having trouble embedding it, so in the meantime, click here for the link-) 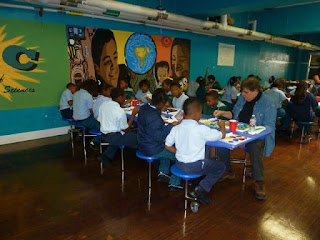 For the older students, this week we launched our first annual Digital Art Contest with a reception in the George Rodrigue Foundation of the Arts Education Center.  Louisiana high school students submit 3-D renderings, competing for $15,000 in scholarships, awarded during a luncheon this summer honoring the winners.

"Today’s art students embrace technology as an artistic tool and pursue careers accordingly,” writes George Rodrigue.  “Three-D models in movies such as Toy Story and within video games such as World of Warcraft reach millions of people and affect our world.”

Rodrigue recognizes the significance of technology in the arts for this computer generation:

“I challenge educators and business leaders to join GRFA in embracing the digital arts as a viable industry for Louisiana and an important addition to our state’s educational programming." 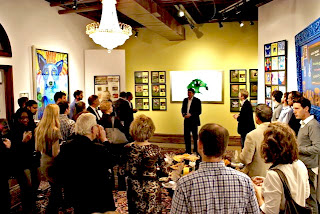 Along these lines, this weekend (February 4, 2012) we award our top fifteen finalists each their share of $50,000 in scholarship money for their winning entries in our annual art contest.  This traditional competition honors Louisiana students for their paintings, drawings, collages and photographs based on this year’s theme “Louisiana’s Bicentennial.”
(pictured, a collage of the finalists’ artworks; for a better look, click photo to enlarge, or click here for individual entries-) 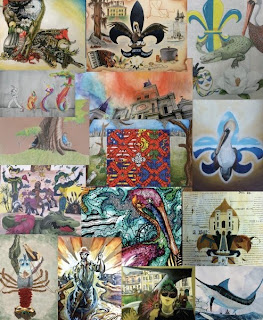 Hundreds of students from across the state submitted their artistic celebration of two hundred years of Louisiana’s statehood.  The top winner designs the official Louisiana Bicentennial Poster, representing our state throughout this important year.
With his foundation, George Rodrigue encourages the arts in all areas of education, even as state and federal funding wane thinner by the day.  Through the generosity of several corporations, organizations, and GRFA’s founding members, along with a successful Print Donation Program, he watches his dream become a reality, as children remain inspired by the arts in school, just as he remains inspired by the arts in life. 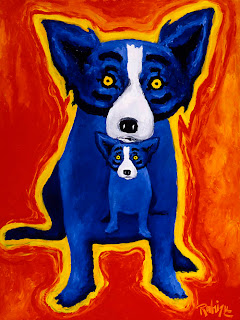 It was Pablo Picasso who said, famously,

“It took me a whole lifetime to learn how to draw like a child again.”

And it was Jackson Pollock who rediscovered this same sincere, play-like approach at a young age, thirty-five:

“On the floor, I am more at ease.  I feel nearer, more a part of the painting, since this way I can walk around it, work from the four sides and literally be in the painting.”* 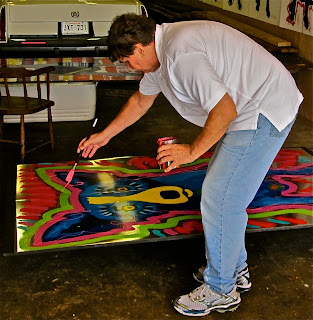 Looks like fun to me-
Wendy
-Pictured above:  Rodrigue ‘drips’ ala Pollock; see “Jackson Pollock at 100,” my latest story for Gambit Weekly, linked here-
-Learn more about the George Rodrigue Foundation of the Arts here-
*See the links under "GIVING BACK" to the right of this post-
*Pollock quote from The Shock of the New by Robert Hughes, Alfred A. Knopf, New York, 1996, p. 313