The Human in the Painting

“She was like a woman of Leonardo da Vinci’s, whom we love not so much for herself as for the things that she will not tell us.” –Cecil Vyse, A Room with a View by E.M. Forster, 1908

Certain paintings, particularly a certain era of paintings, transport us, if we let them, to another age of humankind.  I say ‘humankind’ instead of the more colloquial ‘mankind’ because lately, although I shy away from politics in blogging and conversation, we women face oppression on some scale or, more accurately, the fight for women’s rights, as though this is the United States 1913, and the question of women’s suffrage hangs in the balance.* 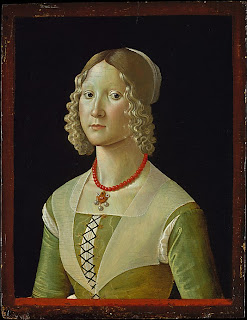 If we’re still fighting for a voice today in the United States of America, how must it have been for the Italian girl in the portrait above, immortalized (by men) like a few elite others, within frowning, idealized wedding impressions sixteen years before da Vinci’s smiling subject suggested that just maybe a woman holds a secret or, Heaven forbid, an opinion.
Currently the Metropolitan Museum of Art hosts a magnificent exhibition of Renaissance portraits, men and women, up to 1510.  I thought of each painting in terms of the Mona Lisa (1504) --- whether Florentine with endless vistas spreading behind the subject, or Venetian, captured on shiny black backgrounds, more like figures painted on a polished obsidian rock rather than an empty, infinite space --- and how this famous painting of a woman, painted by a man and copied by many, altered perception, so that mankind became humankind, and humankind became the individual.
What do you think of the Mona Lisa?  I asked George Rodrigue.

“In that vein of ‘humankind,’ the Mona Lisa became the most famous painting in the world portraying an unknown subject.  It represents a common person rather than a noble one.

"Da Vinci’s contemporaries saw the painting in his studio and were shocked that he painted it not as a commission, not to make someone famous, but rather for the pure joy of capturing a persona on canvas.  With the Mona Lisa, the artist was no longer exclusively a craftsman interpreting other’s ideas.” 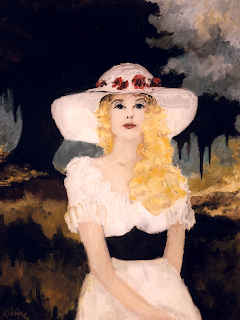 (George Rodrigue painted Jolie Blonde in 1974 not as a commission, but for himself, from his imagination; read more here)
From "The Renaissance Portrait," I spent hours within "The Steins Collect," falling in love again with Matisse, and laughing at the all-too-familiar deals the young Picasso, always in need of money, wielded in 1907 Paris.
As a teacher, Matisse reminds me of George who, although he enjoys students’ renderings of the Blue Dog, far prefers that they find their own direction, that they use their imagination and spirit to create things in their own way.
(pictured, Color is Just a Color, 2007, acrylic on canvas by George Rodrigue, 40x30 inches) 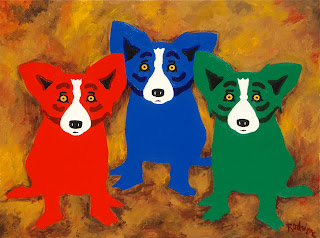 “The idea is more important than the execution,” I’ve heard him say many times.  It’s the reason Salvador Dali, despite no visual connection between their works, remains his favorite artist and the only artist he claims inspires him.

“Matisse,” wrote Annette Rosenshine, a friend of the Steins, “was disappointed if the students merely followed in his footsteps.  He had struggled desperately for his own artistic freedom and was not interested in creating little Matisses, but wished to help the students find their own individual expression.” 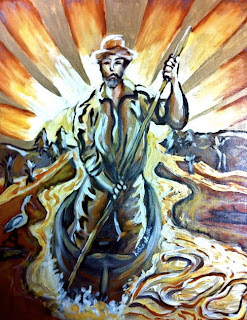 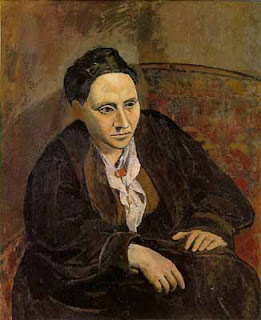 The most famous of the Stein collectors, Gertrude Stein (1874-1946), as painted by Pablo Picasso in 1906 (above, Metropolitan Museum of Art), encouraged creativity across the board.  She embraced painting, opera and writing, and enjoyed great friendships with Picasso and Matisse, artists struggling at the time for public and particularly critical recognition.
Even her portrait, which she adored, is a testament to this mindset.  When others commented that the young Stein looked little like her painting, Picasso responded, to her amusement, “She will.” 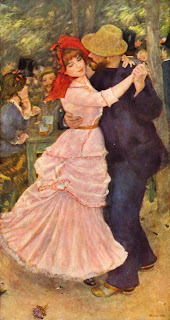 From the Met, I continued to The Frick Collection, where I encountered “Renoir, Impressionism, and Full-Length Painting.”  There I reassessed humankind, womankind, again.  I thought of Lucy Honeychurch in the screen adaptation (1986) of E.M. Forster’s A Room With a View:

“As for your loving me, you don’t, not really.
You don’t.  It’s only as something else.
As something you own.  A painting, a Leonardo.
I don’t want to be a Leonardo,
I want to be myself.”

Enchanted by Renoir’s women, I noted that they are not portraits, but rather subjects filling his vision of French society, from their stylish clothing to the light reflecting from their shapes.  And yet, unlike the harsh criticism of the day, I see nothing offensive in these dancing figures, in a woman who dares remove her gloves in public.  In fact, in thinking about contemporary art, I wonder whatever happened to the notion of a ‘beautiful painting.’
I asked George Rodrigue about Renoir, and his answer, in part, surprised me.

“I never particularly liked him,” he said.  “But I understand what he was doing and I admire the concept of Impressionism.  I mean, photography was a shock, seeing how the light bounces off of the figure into the film.

“Before photography, the artist drew a form first, emphasizing the shape in an almost technical way. ….think of Michelangelo’s Renaissance drawings.  The artist was as aware of the backside of the head as he was the front.

“The Impressionists could care less about the backside of the form; they only wanted an impression of what they saw.”

From Renoir’s impressions at the Frick, we encountered Cindy Sherman’s illusions at MOMA, an interesting contrast.
Again, George Rodrigue and I disagreed --- not a squabble, but a way of seeing, linked, I believe, directly to notions of ‘womankind.’  He says ‘no,’ however, (and we disagree some more) but that the differences are based on his artistic understanding, which may partly be true.
It’s the kind of discussion we live for, a true exchange of ideas, in which he gives my brain, a woman’s brain, as much credit as his own.  But more on that in the post “Our Anniversary,” linked here.
Wendy
*“Why extremists always focus on women remains a mystery to me,” remarked Hillary Clinton this week at the Women in the World Summit.  “But they all seem to.  It doesn’t matter what country they’re in or what religion they claim.  They want to control how we dress; they want to control how we act; they even want to control the decisions we make about our own health and our own bodies.”