Read Me the Blues

I’ve loved libraries from the time I was a kid.  During the mid-1970s I worked at the library at New Heights Elementary School in Fort Walton Beach, Florida for extra credit, and it was there that I discovered James Michener and, at age ten, read Hawaii, a book that shocked me to my young, innocent core, but that told me what books could be, beyond my childhood favorites, Nancy Drew and Trumpeter of the Swan. 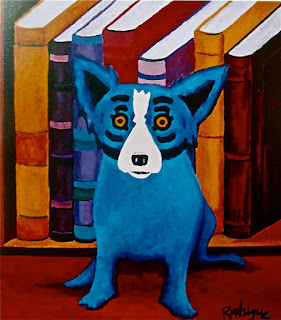 Libraries are a different world in the digital age.  As a blogger, I’m stunned when I think of the reference materials at my fingertips, compared to the hours I spent in college in front of microfilm and within the stacks.  Although research is faster today, in some ways the experience is similar, as I search quietly through this frontier-like screen, rather than pour through books, piled on the floor around my cross-legged seat in the back corner of a quiet library (an experience I enjoy recreating, actually, within my office).

Instead, libraries are “sense-makers,” writes library architect Maria Lorena Lehman, “a dynamic center for idea interaction.”  They attract not only book-lovers, but also information-lovers.  A librarian provides research assistance and an alternate viewpoint.  Within a library, we surround ourselves with voices and knowledge, as appealing today as it was to Cleopatra some 2,000 years ago, as she studied papyrus scrolls.

There are those who ponder the end of libraries... 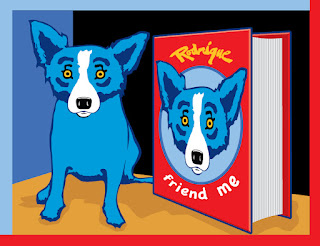 ...however I argue that libraries, like many things, are merely changing.  Like the increasing appeal of independent bookstores, once thought nearly extinct, libraries nurture not only our passion for knowledge, but also our sentimentality.  Through lectures, children’s events and other programming, they engage and stimulate our communities.  With their very presence, they provide brain food and promote cultural dialogue, crossing all generations.

(Tonight George Rodrigue and I visit Abbeville, Louisiana, presenting a lecture for the Vermilion Library*; among other things, we'll discuss his new book, a revised and updated version of The Art of George Rodrigue, published 2012 by Harry N. Abrams, New York and available for purchase through your favorite independent bookstore, linked here- ) 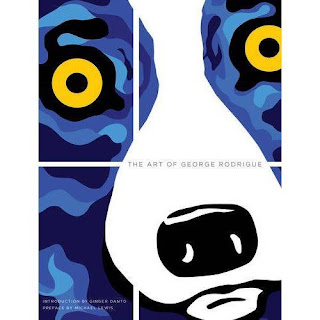 During last year’s exhibition at The Morgan Library, "The Diary:  Three Centuries of Private Lives," I thought about not only changes in libraries, but also the apparent death of cursive.  Will our grandchildren understand Marie Courrege Rodrigue’s handwriting, saved within her diary and letters in my keepsake box?  Will they read the "Declaration of Independence" without a typed translation?

(pictured, a mixture of type and cursive from the personal sermons of Marion Edwards, circa 1947, who preached, along with his brother, former Louisiana Governor Edwin Edwards, for the Church of the Nazarene; related post here-) 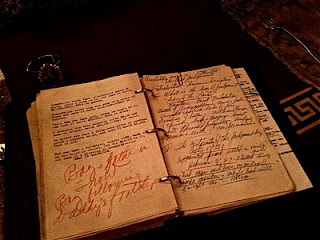 My well-meaning and generous sister gave me a Kindle two months ago, and so far I’ve downloaded one book, John Steinbeck’s East of Eden, a reading experiment I’ve yet to begin, although the leather-covered, lightweight computer-book traveled already twice across the country within my carry-on bag (where it remains, awaiting the next trip).

Instead I’m just finishing the biography of Edith Piaf (1915-1963), a gift from my equally generous and bookish friend Emer, a first edition protected from the elements and my hand lotion by one of the clear plastic covers stored flat behind my bookshelves.  She was named Piaf by her agent, a man who guided her for only a few short months before he was shot in the eye and killed by gangsters.  The word "piaf" in French means "sparrow," and the reference reminds me of a painting of Esther Bigeou, the Creole Songbird, by George Rodrigue (1989; click photo to enlarge-). 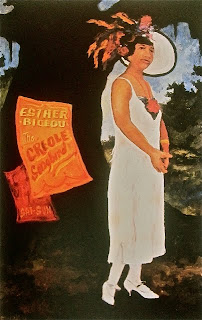 Yet, my old-fashioned book attachment is far from all-inclusive.  After all, I’m a blogger.  And, more than once, as I read the story of the tiny French woman with the enormous voice, I run to my computer for a musical intermission-

*for more art and discussion, please join me on facebook-

Posted by Wendy Rodrigue Magnus at 10:57 AM