George Rodrigue painted the Aioli Dinner in 1971 based on photographs of a gourmet dinner club, the Creole Gourmet Society.  This was his first painting with people, and during the six months that he painted their portraits and a landscape on this single canvas, he developed a style uniquely his own and recognizable today, forty years later, as Rodrigue.

In honor of Louisiana’s bicentennial year, 2012, George Rodrigue offers for sale a special version of the Aioli Dinner, his first $100 retail reproduction since his Jazz Fest posters of the late 1990s.  To create the print, he photographed a re-worked version (1992) of his Aioli Dinner, increasing contrasts and highlights, resulting in a higher quality reproduction than his earlier posters of the same image. 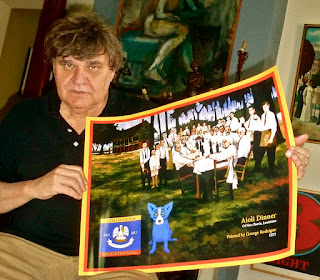 He also adds the Blue Dog, rooted in a Louisiana legend, an important shape and icon within his work of the past twenty-five years.  Both the Blue Dog and the Aioli Dinner suggest a melding of Louisiana’s traditions with its contemporary art, a blend that also describes Rodrigue himself.

“Of all of my paintings, it’s the Aioli Dinner that best commemorates 200 years of statehood,” explains Rodrigue.  “The men around the table came from many backgrounds --- French, Spanish, Italian, German --- and together they planted the seed for modern day Louisiana.” 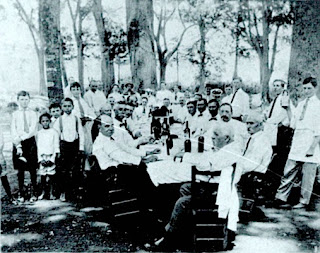 “This early 1900s influx of various European cultures greatly influenced my hometown of New Iberia and, by extension, my paintings of Cajun folk life.  My mother (born 1905) often spoke of the various ethnic markets offering everything from pasta to bratwurst."

(pictured, Rodrigue’s Farmer’s Market, 1984; for a detailed history of this painting, click here-) 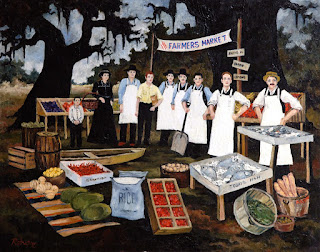 Both the Creole Gourmet Society and Aioli Dinner have rich histories, including specifics of Rodrigue’s style development.  Rather than repeat those details here, I direct you to the post “The Aioli Dinner and a Cajun Artist,” which includes photographs, diagrams and vignettes surrounding Rodrigue’s most famous Cajun work.

The post also includes the 1992 re-worked version of the painting, a canvas George kept for himself after adding the Blue Dog and nicknaming it Eat, Drink and Forget the Blues.

Most exciting, the original Aioli Dinner of 1971 finds a new home this year at The Ogden Museum of Southern Art in New Orleans, where it hangs on loan beginning May 10th, 2012.  That evening Rodrigue shares the history of his painting during a special public event (5:00 p.m., $10 admission).

George Rodrigue is not the only Louisiana artist honoring our bicentennial. Lafayette artist Francis Pavy produced a series of works for his recent exhibition Francis X. Pavy:  200 – Art Inspired by 200 Years of Louisiana Statehood (detailed here), and New Orleans artist Miranda Lake premieres her new print, Louisiana, the Pelican State (pictured here), which she describes as “a celebration of the natural beauty of our state, as well as a reminder that we must carefully tend our future --- like eggs in a nest.”

Most exciting, Lafayette student Katie Atkins, a junior at St. Thomas More High School, created What We’re Made Of, a pictorial map of Louisiana.  Her original artwork not only won first place at the George Rodrigue Foundation of the Arts Scholarship Contest, it also became the official bicentennial poster chosen by the Louisiana Bicentennial Commission.  (details here-) 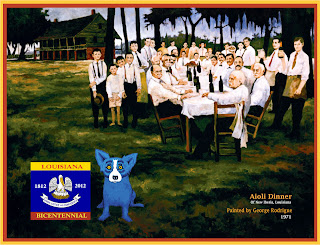 Finally, I leave you with a full version of Rodrigue’s Bicentennial Poster (18x24 inches; click photo to enlarge), combining the Blue Dog and early Louisiana in a celebratory design.  Available beginning today,* this commemorative print represents one artist’s Louisiana homage, a tribute honoring the state he loves.

*Rodrigue’s Bicentennial Poster is available only through Rodrigue Studio. The price is $100 per print, unframed and unsigned, offered for one year or while supplies last.  For further information call Rodrigue Studio or email info@georgerodrigue.com-

*George Rodrigue regrets that he is unable to sign these prints-

*For more art and discussion, please join me on facebook-