“People are moving in time and in history, in a pirogue, on land...”

...wrote George Rodrigue in 1975 about his painting, John Courrege’s Pirogue.

The painting is one of seventy-eight images featured in the book The Cajuns of George Rodrigue, the first book published nationally on the Cajun culture (Oxmoor House, 1976, detailed here).

From the beginning, Rodrigue imbued his paintings with symbolism, from his hard-edged, topless oaks to his glowing white figures.  His rivers and roads blend as one.

“When the Cajuns arrived in Southwest Louisiana,” he explains, “the bayous, creeks and other waterways were the only roads. The people used them in the same way the Native Americans did for centuries before.  All early settlements were on the bayous – Bayou Teche, Bayou Lafourche, the Vermilion River, and the Mississippi.  People needed this transportation for trade.” 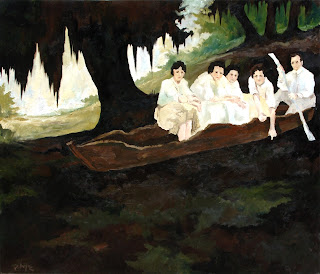 “I named the painting after my cousin, John Edward Courrege, who, the minute he got his driver’s license, drove me to Catholic High every day for four years.  Later on, he worked in the junkyard with his father and sisters.” Oddly enough, it was an unrelated photograph that reminded me this week of George’s surreal concept of a boat floating on the land.  What is a Photograph? is a new exhibition at the New Orleans Museum of Art. Through a series of images and processes spanning more than 150 years, curator Russell Lord shows us why “photography, it seems, is not one medium, but many.”

Amidst this wondrous variety, a small dark image caught my attention. 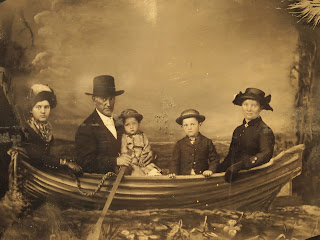 “In this humorous example, a family poses for their portrait indoors with studio props and a contrived backdrop intended to make them appear to be enjoying a leisurely outing in a boat.”

It turns out that George Rodrigue modeled his painting after a similar family photograph (circa 1910, unfortunately lost).  The figures, probably members of the Courrege family, sat in a pirogue on the bank of the river and posed for a picture.

What’s more, the 1885 NOMA photograph includes subtle hand-coloring, pale reddened cheeks suggesting the healthy effect of the outdoor air. -be sure and click the photo above for a closer look-

This charming application sent me on another tangent, as I recalled George Rodrigue hand-coloring the Blue Dog’s eyes in his earliest silkscreens.  As with photography, his method hinged on technological limitations. 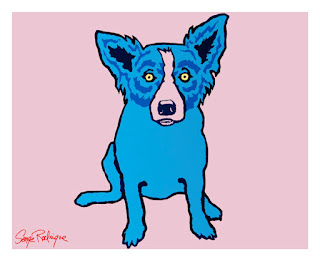 In the early 1990s, silkscreen ink and colors dictated, to Rodrigue’s frustration, both quality and variety.  Therefore, he preferred paint, pulling his prints by hand and applying each color individually.

The expensive materials and time-consuming process, further complicated by the frequent scratches, dings and splattered paint, necessitated improvisation.  Rather than pull the prints again, he used a simple paint pen, adding yellow pigment to the dog’s eyes, thereby reducing both expense and damage. 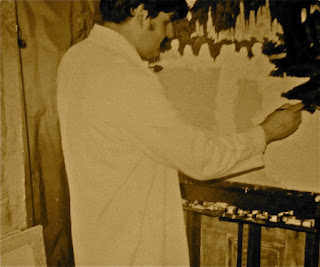 Traditionally, artists conceive new methods of fulfilling their creative goals and conveying their message.  Whether the symbolism of a land-locked floating boat, the illusion of a contrived studio portrait, or the practical application of hand-applied paint to a printed image, this improvisation spurs us forward.

Nowhere is that more obvious than the technological advancements within photography, from the daguerreotype to digital, as laid out in What is a Photograph?.  I hope you’ll join me next week at Gambit Weekly for a closer look at this fascinating exhibition.

-don’t miss What is a Photograph? at the New Orleans Museum of Art through August 19th, 2012; for further information visit the museum’s website

-for more art and discussion, please join me on facebook