Clifton Chenier and a Cajun Explosion

In 1985 George Rodrigue painted the great musician Clifton Chenier (1925-1987).  At the time, Chenier was world-famous, crowned a Grammy Award winner in 1983 and summoned everywhere from San Francisco to Switzerland to share his unique Louisiana sound.

Rodrigue’s timing in painting the portrait honors Chenier not only for his music, but also for his passion and perseverance, as he entertained crowds throughout his struggles with diabetes and kidney disease.

“He inspired me,” says Rodrigue.  “Still does.  He didn’t curl up and let his disease stop him, even after losing a foot to diabetes.  He kept on playing.” 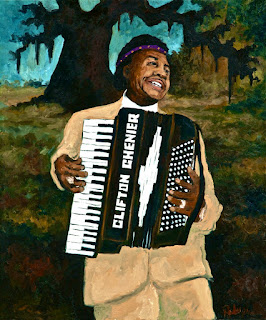 (Clifton Chenier, 1985, oil on canvas, 24x20 inches by George Rodrigue; a recent addition to the collection of the George Rodrigue Foundation of the Arts; graciously donated by Don Sanders of Houston, Texas for permanent display within GRFA’s Education Center, New Orleans; click photo to enlarge-)

I asked George Rodrigue if he ever met Clifton Chenier.

“No, but I often passed him on the highway.  He traveled from Loreauville to Dallas for gigs, and I’d see his convoy when I traveled the same direction selling my paintings.  He pulled a trailer behind his gold 1972 Cadillac Eldorado.  Across the sides it said, “Clifton Chenier:  King of Zydeco,” with a big picture of himself wearing a red crown.”

“They were all gold,” he laughed.

Rodrigue’s portrait is typical of both the musician and the artist.  Chenier wears his trademark rings, headband, and smile while playing the accordion.  He stands not on a stage, but framed within the branch and trunk of a Louisiana live oak, a strong shape developed within Rodrigue’s earliest landscapes.

Chenier was the third of Rodrigue’s portraits featuring an accordion player.   The first, in 1971, honors Iry LeJeune (1928-1955), the blind musician who by all accounts influenced every Cajun musician following. 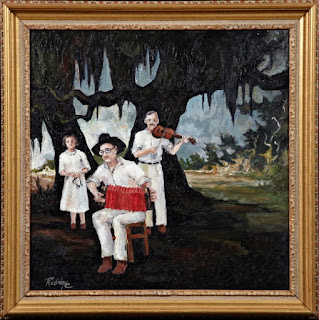 (Click photo to enlarge; read a detailed history of this painting here). 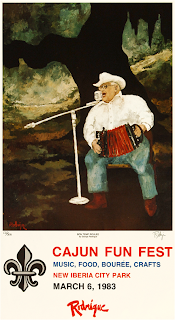 “I ran into him performing on stage at the St. Martinville Boucherie Festival and took about fifty photographs of Meaux and his band.  He was a striking figure.  Had to be over 250 pounds, wearing his big white shirt and his cowboy hat.  The typical Cajun accordion became small in his presence, competing with his size, shirt, boots and hat.  Just a great image.”

In 1975 photographer Philip Gould captured the King of Zydeco, Clifton Chenier (above; be sure and click to enlarge), at the Cajun Music Festival in Lafayette.  Known for his personal and documentarian interpretations of Louisiana’s land and culture, Gould* is also a musician, partial to the accordion, a passion uniquely linked to his subject, including an ongoing series of "Accordion Portraits."

According to George Rodrigue, it is music, along with food and art, which characterizes Louisiana’s culture as a whole:

“People outside of Louisiana first connected the word ‘Cajun’ to music.  Soon after came Chef Paul Prudhomme, Tabasco, and in 1975, art, when The Cajuns of George Rodrigue became the first book published nationally on the Cajun culture.  The music, food, and art of the 1970s and 1980s introduced ‘Cajun’ to the world.”

*With sincere appreciation to Philip Gould for the use of his iconic Chenier portrait; Gould's photographs are the subject of my recent essay for Gambit Weekly, linked here-

- Melanie Falina with the New Orleans Examiner caught me recently for “A Life Among Art:  An Interview with Wendy Rodrigue,” linked here-

-for more art and discussion please join me on facebook-