Dog in a Box

In yoga, I spent years within our bedroom practicing tree pose, standing on one leg, arms stretching skyward, until I balanced with ease.  Yet at my first attempt outside, at the edge of our patio in Carmel Valley, California, I fell.  Breaking my own rule, I donned my glasses, focusing on a distant tree, and tried once more, teetering a few seconds before falling again.

Obviously, although I never touched them, the four walls and ceiling of our house supported me psychologically without my realizing it during hundreds of tree poses, as though imaginary beams pressed and stabilized with energy from every angle.  It was easy to reach for Heaven when it extended past the ceiling, all buttressed by the walls of a residential box.

But outside, the sky left me reeling and unsteady, both on my feet and inside my head, as I struggled for focus within, ironically, the freedom of a wide open space. 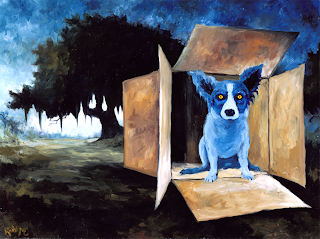 The earliest Blue Dog paintings of the late 1980s and early 1990s referenced, without exception and unlike today, the loup-garou, a werewolf or ghost dog that haunted George Rodrigue’s childhood memories:

“If you’re not good today,” warned the artist’s mother, “the loup-garou will eat you tonight.”

From the first Blue Dog painting, Watchdog (1984), Rodrigue imagined the mythical creature under a dark sky and within cemeteries and sugar cane fields.  It ran wild in the humid Louisiana night air, unlike its model, Tiffany, a family pet born and transported in a box.

“Tiffany’s first doghouse was a cardboard box,” explains George.  “We brought her home in it, and she liked it as her house, only venturing into the grass after she outgrew the box.  Even as I painted the loup-garou, at times my mind drifted to Tiffany, until eventually I created a series of paintings less about a ghost story and more about my dog.” 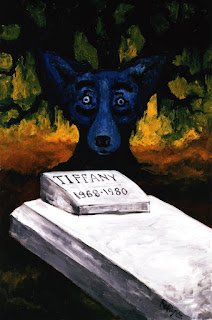 Although wont to claim ‘claustrophobia,’ for George, enclosed spaces, unlike my supports and Tiffany’s home, are simply unpleasant and relate to ill health.  This began in his childhood when, while suffering from polio in the early 1950s, he saw other children, those in more advanced stages of the disease, confined within iron lungs. He talks of it today with anxiety as he faces medical tests or procedures, opting for an open tube whenever possible.

“First thing they ask you is what kind of music you want to hear – which doesn’t help at all when you’re trapped for an hour in a pipe.”

My advice fails too, as I suggest he close his eyes and imagine wide open spaces.

“All I think about is those iron lungs,” he explains. “And my aching arms and back, stuck forever in one position.” 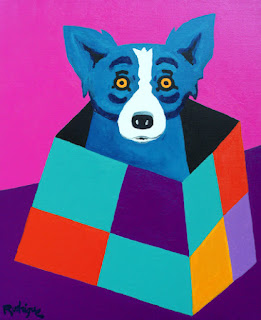 On his canvas, the idea of a box changed over time as much as the dog itself.  In recent years, both the loup-garou and Tiffany remain mere roots of a series that developed beyond Cajun country and family memories.  Today the series ranges from acutely personal to universal, but always carefully planned, using shape, color and design, as though Rodrigue attacks a puzzle, transferring it from his expansive brain to the space bounded by four sides of a canvas.

“Tiffany outgrew her box; however, as an artist, the box idea never left me.  Every painting starts with a two dimensional canvas-box that has to be filled and dissected and arranged – eventually becoming a three dimensional illusion.  It’s the first problem I face with every painting.” 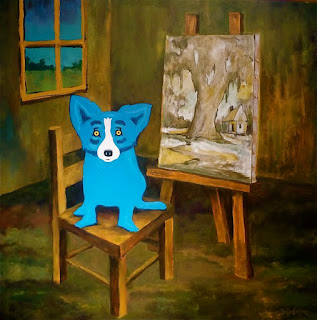 My yoga practice recedes and grows in the same way. Today I stand half-blind and steady outside, whether overlooking a valley or standing on a pier.  It’s when I close my eyes, however, that the new supports fail again, and I’m falling, flailing as though once more out of my box and new to the world. 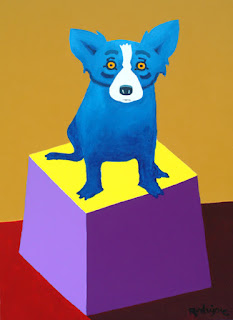 Years ago, after four failed MRI attempts, my Grandma Helen, at her doctor’s suggestion, endured my voice throughout her test as I recounted family stories.  I guess it was my first speech, as she remained captive for thirty minutes or more, trapped and unable to respond, while I rattled on about holiday plans, George’s latest paintings, new growth in our garden and whatnot.

She came through it, relieved, no doubt, to escape my droning soliloquy as much as the tiny tube.

Recently I shared this memory with George and made the same offer.

“That’s okay; I’ll make it,” replied the Blue Dog Man. "Besides, they gave me something for pain."

And I swear he rolled his eyes.

- Melanie Falina with the New Orleans Examiner caught me recently for “A Life Among Art:  An Interview with Wendy Rodrigue,” linked here-