I’ve written before about brothers André and Jacques Rodrigue.  George painted his boys many times, and the paintings, including Kiss Me I’m Cajun with André and Paint Me Back Into Your Life with Jacques, are classics among his oeuvre.

(For a look at those iconic works, along with a collection of family photographs, see the story, “André and Jacques:  The Rodrigue Brothers.”)

However, for this post, in celebration of Father’s Day, I asked George Rodrigue’s sons about their dad.

“My dad is one of the most interesting cats I’ve ever known,” says André Rodrigue, age 37, “and I intend that statement as objectively as possible.” 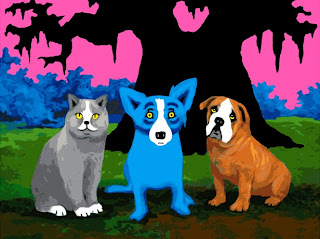 (pictured, Three Amigos, part of the George Rodrigue Foundation of the Arts’ Print Donation Program, raising funds for other non-profits, and spearheaded by GRFA’s Executive Director Jacques Rodrigue; ...note:  it is so like André to refer to the Blue Dog Man as a cat- )

I asked George for a memory, and he laughed.


“André was smart even as a baby.  I remember years ago when a dinner guest, a university professor, challenged him,

‘André, what will happen to the earth when the sun burns out?’

‘By that time scientists will know how to move the earth, and we’ll be saved.'" 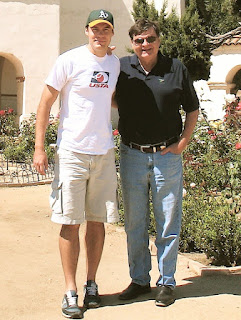 Jacques’s broader interests developed later.  Whereas a young André and his dad discussed space travel and politics, Jacques and his dad shared the lighter side.

“As a kid I hung out in his studio late at night,” says Jacques, “and we played pool when he paused at painting.  Sometimes he set me up with paints and a canvas.  I worked alongside him while we watched Johnny Carson and David Letterman.” 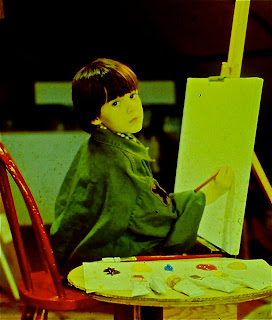 “They were completely different as kids,” explains George, “and they were seven years apart, so they rarely wanted the same toy.

“One time in the car, André read while Jacques, wanting his brother’s book, threw a tantrum.  I told an irritated André to share the book, hoping to quiet his three-year old brother.  Jacques opened the book, looked at André and asked, verbatim... 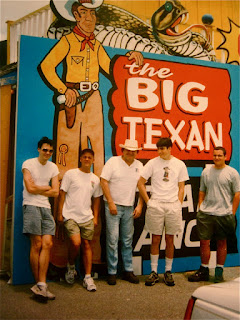 “My dad traveled often to shows and visited clients around the country,” recalls Jacques, “and during the summer, my friends and I tagged along in his van.  He was always so great and wanted us to see the coolest sights like the world's largest thermometer, the dinosaurs in Arizona, Route 66 and the Grand Canyon.

“My friends and I cherish those memories and appreciate how hard he tried to make us happy even when we occasionally killed the car battery in the middle of the night by watching our movies or playing Nintendo when the car was off.  Sorry about that Dad!" 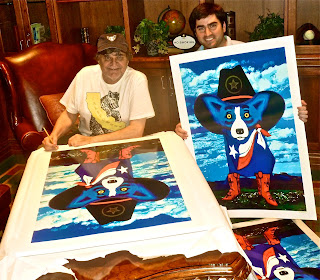 This summer the Rodrigue family, these three amigos, hits the road again, returning to Amarillo as we open “Blue Dogs in Texas,” an exhibition at the Amarillo Museum of Art, August 10 – October 14, 2012.  We’ll also celebrate Jacques’s 31st birthday, by his request, at the nostalgic Big Texan. 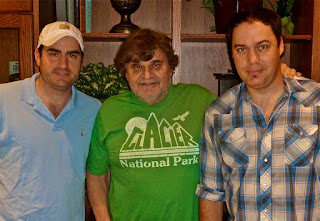 “Do you think André will try again for the free 72-oz steak?” asked George, as we planned our trip.

But we all knew his question was rhetorical.

-pictured above, George Rodrigue and his sons celebrate Father's Day 2012 in Houston, Texas

-also in honor of Father’s Day, a tribute to my dad, John Wolfe, in a story for Gambit Weekly, linked here-

-read about George Rodrigue’s love of Texas and the West in the links under “Rodrigue on the Road,” listed to the right of this story- 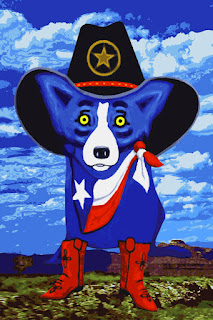