“The straight sprints raced in heats or in match races where the two riders would balance for long seconds on their machines for the advantage of making the other rider take the lead and then the slow circling and the final plunge into the driving purity of speed.” –Ernest Hemingway*

Because life intended it this way, George Rodrigue and I are with characters in Houston, Texas for the summer.  One couple, Janice and Tom "Slim" Gray, pigeon racers, formerly horse racers, formerly rooster fighters, formerly dairy farmers, join us on Mondays for the baseball cap and banana bread swap.  We women nod “Mornin’” while the men forego the salutations in favor of the point:

“Years ago, when I was smokin’ and drinkin’ and runnin’ with wild women…”

…offers Slim, beginning the politically incorrect exchanges that flow naturally from a Cajun and a Cowboy trapped in a storytelling match race every week for six hours in a sterilized room.

“Call it like it is, Wendy,” says George as I read him this opening.  “A Coonass and a Horse’s Ass.  It was the cowboys that named us Coonasses; so we returned the favor.” 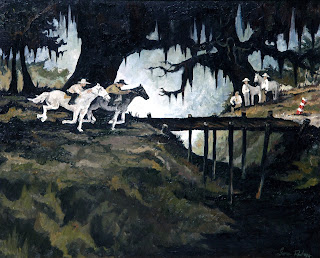 For me, the days are full of firsts:

He kinda looks like Hank Williams, I whispered to George on the day we spied Slim.  We eavesdropped as he spoke to his wife,

“Is it next week we’ll be in New Iberia with those dagos?” he asked, as she shushed him and crawled under her chair.

I glanced at Janice with sympathy while George, hearing his hometown, jumped in.

They continued from one subject to the next across the room.

“You remember Moon Mullican?” called George.  “You know they say he wrote 'Jambalaya'.”

“We got an ol’ boy in Alvin (Texas) plays 'Jambalaya' on the squeeze box,” replied Slim.

“Ya' know, Nolan Ryan’s from Alvin,” he continued. 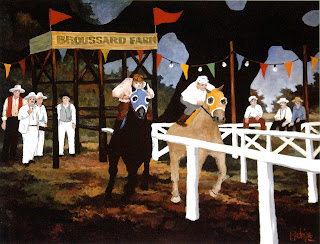 It was also the first time I’ve heard of a match race outside of George Rodrigue’s 1982 painting (above) and, ironically, an offhand reference within Hemingway’s A Moveable Feast, which I finished, also this week, as the geriatric crowd slept.

It was Slim’s recollection of a match race, in fact, which gave me the idea for this story.

What’s a match race? I whispered to George.

“All of my paintings of horses running are of match races,” he explained, shaking his head, where has she been?  “Cajuns race quarter horses, matching one horse and one jockey against the other.

“Many are ‘claiming races’ – you win the race, you win the other horse.   I saw them first as a kid at the track in Abbeville, and when I started painting horses, I went back to the races again.” 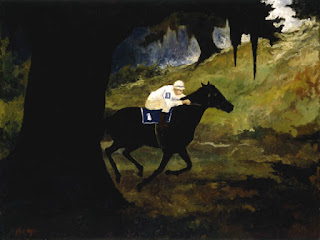 “It was a lot like the cock fights, betting against someone else’s horse or rooster.

“A lot of inside bettin’ on that….,” he continued.

“You ever shoot skeet?” asked George.

“Yup, but we use live pigeons.”

In this weekly match race, George started on one side of the room and Slim on the other.  The first day they flung friendly obscenities.  The second day they sat two chairs closer; and by day three they sat side-by-side, exchanging thoughts on today as though they were days gone by.  In between lab runs and lunch orders, Janice and I occasionally get in a word.

You’re laying black top in Breaux Bridge, Louisiana? I asked Janice, knowing George was just as curious after over-hearing her phone conversation about work in the Crawfish Capitol.

“Yeah, but I’m having trouble getting my delivery.  I may have to do it myself.”

You’re a true modern woman, I commented, genuinely impressed. When I was a young girl we all aspired to be First Lady.  It never occurred to us to shoot for the top job.

“When I was a girl,” countered Janice, “we all aspired to wear an apron and raise kids.  That was the top job.”

George and I discussed our recent passion for 1960s Columbo, before Slim and Janice trumped us with The Waltons. 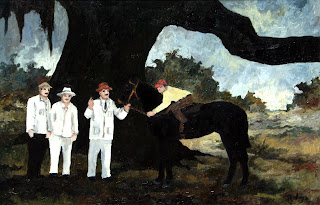 (pictured, At the Carencro Racetrack, 1980, oil on canvas by George Rodrigue; click photo to enlarge-)

Tell them about the preacher, I urged George.

“Years ago,” he began, “as I passed through Alexandria, a preacher and his wife approached me in the parking lot of Landry’s Restaurant for a Jolie Blonde print.  The preacher peeled $25,000 in one hundred dollar bills from his pocket, and they bought five paintings and a bronze from the trunk of my Lincoln Continental.  I threw in the print,” he laughed,  “lagniappe."*

“’Everybody thinks we live with hardly nothin’ in our shotgun house,’ explained the preacher’s wife.  ‘But we sure like our art!’”

With an unprecedented and unexpected pocketful of cash, George continued his drive from Alexandria to Shreveport, where he delivered paintings to a collector, who invited him to the Louisiana Downs Racetrack.  There they joined Racing Commissioner Gus Mijalis in his suite, and in less than an hour, betting with the rowdy bunch, George lost $22,000. 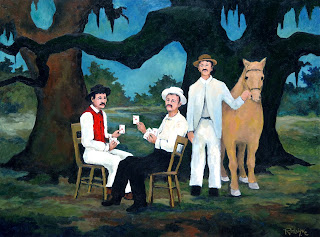 (pictured, One Too Many Aces, 1987/2010, oil and acrylic on canvas by George Rodrigue; click photo to enlarge-)

Dejected, he moved to the bar, where he struck up a conversation with a small man hunched over a racing form.

“Got any winners?” asked George.

“I got ‘em all,” mumbled the bookie through his cigar, sharing a glimpse of his form.

“I just need two,” said George, holding up his fingers.

...and that's true, as I recall him playing the slots last time we joined friends at the track.

We all laughed, and Slim and George continued their colorful exchange, one-upping each other, pulling stories from memory in anticipation of this weekly match race.  As Janice returned to her black top negotiations, I opened my book:

“For a long time,” wrote Hemingway, “it was enough just…to bet on our own life and work, and on the painters that you knew and not try to make your living gambling and call it by some other name.”*

Note: This essay was revised and updated 8/20/13 to reflect the version appearing in the book, The Other Side of the Painting (UL Press, Oct. 2013),  including, at their request, Janice and Tom Gray's real names- 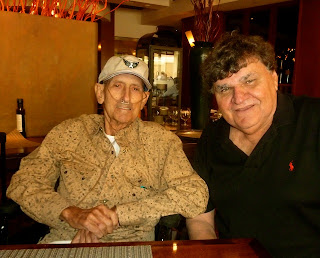 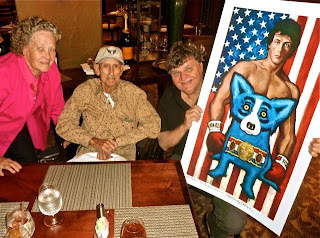 -note: if you’re offended by this post, you’ll find me “hiding behind displays in the supermarket” with author Patty Friedmann-