“I know what your problem is, Wendy,” noted Heather, as she endured, as sisters do, my somewhat minor, but nevertheless ridiculous, breakdown over exceedingly minor things.

A whiny, determined adolescent wins out occasionally, lurking, pouting, and stewing within my, one-would-hope, adult mind over dumb stuff.

I am not exchanging a three-year old print purchase for the same print sporting this guy’s new lucky number!  Doesn’t my ‘anonymous’ cyber stalker know that she can’t hide from my stat counter? Where the heck is Downton Abbey, Season 2 on Netflix?

It’s not boredom, I’ve decided, but it is a state of mind.  This summer the bigger issues overwhelm my conscience to such a degree that I shove them back, unwilling to face them twenty-four hours a day, filling my mind instead with folly.

George Rodrigue, as far as I know, has never done this.  While I worry about explaining the paint splatters on our hotel room coffee table, he ponders, so I thought, the colossal quagmire, the very real situation that landed us in Houston for the next several months.  And yet, he counters...

"My concerns are primarily art concerns.  The Blue Dog never really stops talking to me." 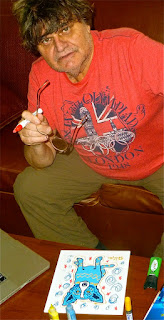 Recently, for both our sakes, I pull a subject from the air, as we sit lost without Maggie Smith, looking through hundreds of paintings and letters from children at Liza Jackson Preparatory School from my hometown of Fort Walton Beach, Florida.

Did you ever have a pen pal?

“Of course, everybody did,” George shrugged; “it was the thing.  Somebody told my mama that her son dropped his pen pal, and so I took him up.  He was Turkish, and I could hardly read his writing.  Mostly we sent postcards.”

Did you want to go to Turkey?

“I had no idea what a Turkey was; nor did I really think about it.” 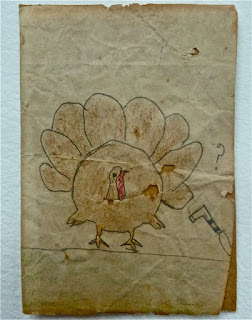 And finally, he started….

“I was interested in airplanes.  I wanted to be a pilot (note:  news to me-).  And I liked buying airplane books--- military, jet fighters, commercial, all kinds.   I wrote to airplane companies- Lockheed, Boeing and others, requesting photographs of planes.  They sent me beautiful 8x10 images.” 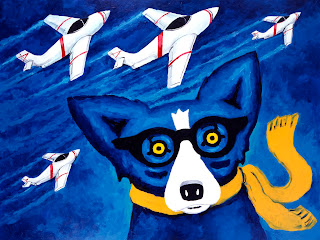 (pictured, The Wild Blue Yonder, 2000, part of the Xerox Collection)

“I worked on an airplane scrapbook.  It’s still in my attic studio on St. Peter’s Street.

“The pictures were better than in the magazines, and it was free, just like the internet!  It was much more exciting than a Turkish pen pal.”

I like his diversions far better than mine, I thought, recalling my earlier complaints to my sister.  I focused on the hand-made cards.

“When you paint,” reads one, “take a sip of water after every stroke.” 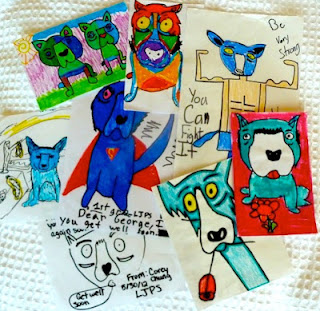 At last, refocused, I dropped the petty worry, apologized to my husband and sister, and recalled the important things in life.

-with sincere thanks to the children of Liza Jackson Preparatory School, who cheered our windowsills and our moods with their heartfelt words and paintings; we loved meeting you at your school last fall with the George Rodrigue Foundation of the Arts and the Mattie Kelly Arts Foundation; and we will see you again- 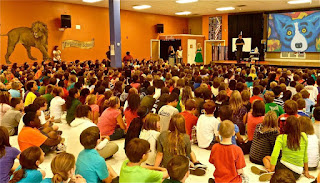 -also this week, I hope you enjoy “What is a Photograph?” my latest story for Gambit Weekly, featuring a classic Rodrigue Cajun painting and an outstanding summer exhibition at the New Orleans Museum of Art-

Posted by Wendy Rodrigue Magnus at 10:45 AM