All proceeds from posters of the three paintings benefited LPB’s television programming.

“At the gala,” recalls Rodrigue, "each nominee gave a short acceptance speech.  Jimmie Davis, age 91, approached the podium slowly and read his prepared words, as we all clapped for our former Governor.” 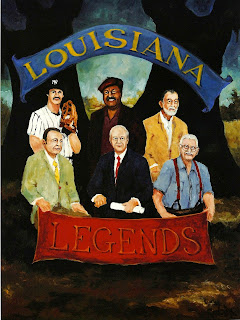 In 1991 LPB honored Rodrigue as well, resulting in a self-portrait.  The artist was as famous by this time for his Blue Dog paintings as for his images of Cajun folk life. 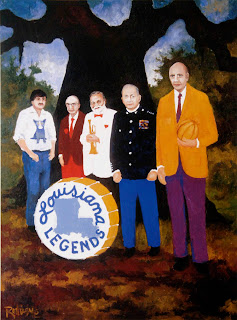 And in 1993 Rodrigue’s final LPB painting echoes his first two with his classic oak tree and timeless figures. 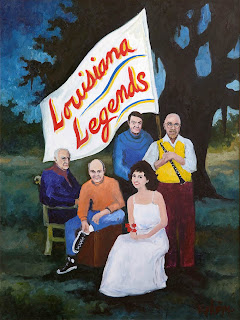 Although honored to paint and participate in the Louisiana Legends, it was the first gala in 1990 that remains poignant for Rodrigue.  At the presentation’s end, Master of Ceremonies Gus Weill shared with the crowd,

“We have a real treat for you tonight.”

“This elderly man who barely made it to the podium earlier,” recalls Rodrigue, “transformed before us, along with his old cronies, into a twenty year old kid.”

Davis began his speech again, as though his first time on stage:

“I recorded this song fifty years ago.  Since then it’s been recorded hundreds of times in hundreds of languages, and we’re pleased to play it for ya’ll tonight.  If you know the words, chime in.”

There wasn’t a shy voice or dry eye in the room, as the two-term Louisiana Governor performed “You Are My Sunshine.”

“...the minute the music started, Jimmie Davis danced a jig, and the crowd stood on its feet. It was one of the most memorable things I’ve ever seen.  He played two encores.”

“That day,” continues the artist, “I saw an old man become young again; that day I watched Louisiana history play out before me; and that day I truly saw what it means to be a living legend.”