Yesterday morning I sat in the window of a Houston, Texas café, George Rodrigue’s sandwich order in hand, awaiting the counter change from breakfast to lunch.  An Ignatius J. Reilly nearby spoke of high water and broken computers into what I first thought was a hand’s free phone but turned out to be air.

“Damn this spilled coffee!” he shouted, looking at me.  I shrugged, seeing nothing. He repeated his creed until I nodded in agreement, handing him a napkin which he tossed aside, grinding his teeth and abandoning his tray.

“Hot dogs, hot dogs,” called the Ignatius in my head.  “Savories from the hygienic Paradise kitchens.”* 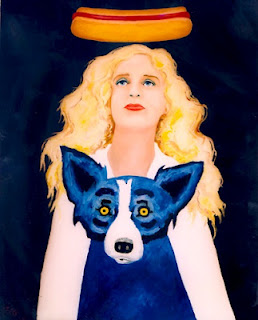 As if on cue, Yusuf Islam, a.k.a. Cat Stevens, began "Don’t Be Shy" over the speakers of the now empty restaurant, sending me again into a helpless emotional state.

Adding to this surreal scene is our current situation, too private to share in detail, but real, the source of speculation and concern, the surprising “job training,” as my friend Barbara calls it, and the catalyst of a bigger life’s picture:  family, legacy, and love. 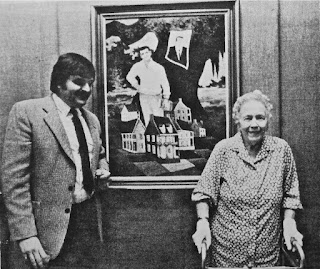 (pictured:  George Rodrigue and Thelma Toole, 1981, with his painting based on her son’s novel, A Confederacy of Dunces. Rodrigue painted this portrait for the University of Louisiana at Lafayette’s Flora Levy Lecture Series.  See the painting and read its history here; click the photo to enlarge-)

“Let me tell you how you are…”

…started George Rodrigue as I shared my café-encounter.  I laughed and grabbed my notebook at this unexpected sign of normalcy.

I can tell he’s feeling better, because he’s telling me how I am, I wrote, before tuning out, at feigned attention, for the familiar analysis, my husband’s hands chopping the air as he dissects, for my benefit, my personality. 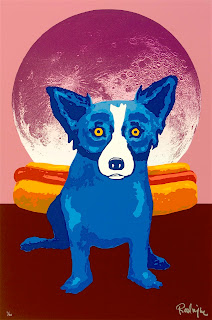 George, begged my sentimental mood, tell me what you love. Shout it out.

“What do I love?” he said quietly, and for him, almost shyly.

Yes! What do you love?  Don’t get philosophical on me.  Just say it fast, all in a row.

"I love Blue Dogs!  I love LSU football!  I love modern medicine!  And more than anything in the whole world, I love to paint!"

And in one word, George, how do you feel right now? 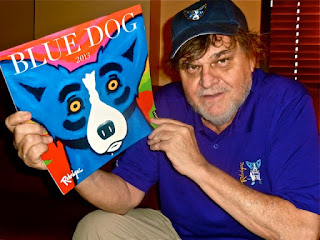 Have you ever painted a Lucky Dog vendor?, I continued, knowing his love of hot dogs.

“No, you giving me that idea?”

“I’ll make him a Blue Dog vendor and have him sell paintings from his cart,” he laughed, pulling out his sketchbook. 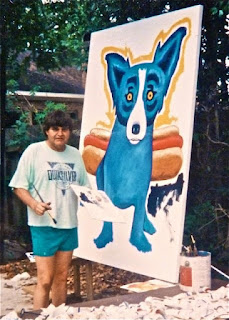 George and I meet regularly this summer with a man whose military reserve unit returned recently from the deserts of Afghanistan, by way of the jungles of Haiti and the Dominican Republic.  He serves, protects, and saves lives from one country to the next, including his skillful operation of the rare machine that brought us together in Houston, coincidentally nicknamed “Hi-Art.”

...he said last week, explaining the joy and interest of their daily visits, especially George’s stories* and philanthropy, both as appealing as his artwork.

I listened, touched, to this American hero and made notes for this post, another chapter in the story of one lucky dog.

“And in one word, how do you feel?” asked George, after reading my draft.

That’s easy, I said, although still a bit peevish...

*George Rodrigue’s stories are the meat of Musings of an Artist’s Wife, now easier to navigate with a new index down the right side of this page-

-pictured above, George Rodrigue this week with his new Blue Dog 2013 Art Calendar, his first wall calendar in seventeen years, featuring all new paintings and available now at this link; published by Rizzoli, New York-