This week I read Just Kids, poet/rocker Patti Smith’s personal account of life with her closest friend, artist/photographer Robert Mapplethorpe.  I had planned an essay on Louisiana’s Legends, a series of portraits completed by George Rodrigue for Public Broadcasting between 1990 and 1993, but after finishing Smith’s memoir late Thursday night, I suffered Friday a crying-headache, unable to focus on anything other than hydration (mine and George’s, coincidentally) and Smith’s poem, “Wild Leaves.”

The Legends, along with Tee Coon, the Breaux Bridge Band, the Texan Blue Dog, and any number of other unfinished posts, fall victim to my lingering, as though bruised, emotional state. 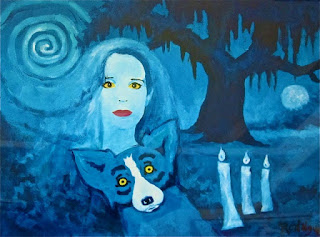 If you’re a woman, you know this headache well.

If you’re a man with this firsthand knowledge, then you’re an anomaly, at least in my world, as I’ve never met anyone like you.

Interesting enough, it was George Rodrigue who said,

“Why do you want to write about the Legends paintings?  That’s boring!”

Yet I knew his comment related to fretful recollections of deadlines and tedious work, as opposed to the subjects themselves, successful, larger-than-life talents like Ernest Gaines, Ron Guidry and Pete Fountain.  Thus, the story remains important, delayed until the day I awake focused once again on Louisiana’s best, yet vested enough personally to make it interesting.

I explained this short essay, an effort to get the 1970s New York art scene out of my head, returning me to Blue Dogs in 2012, to George Rodrigue.

“Nobody knows who she is, Wendy!”

...insisted my husband, a fifty-year member of the Johnny Cash Fan Club.

“Make sure you link to Patti Smith's website,” he said...

...shaking his head as I gave him the look.

“He was worried that I wouldn’t be successful if my work was too provocative,” wrote Smith about Mapplethorpe, in her version of our conversation.  “He always wanted me to write a song I could dance to.”

Any artist’s success lies in a mixture of self-confidence and vulnerability. Whether or not this translates to commercial success is in the stars.  However, altering one’s creative vision based on outside commentary spells the worst kind of failure: personal defeat.  Of this I’m sure.

I circled a passage, as Smith recalls seeing Bob Dylan* at her concert:

“Instead of humbled, I felt a power, perhaps his; but I also felt my own worth and the worth of my band.  It seemed for me a night of initiation, where I had to become fully myself in the presence of the one I had modeled myself after.”

Throughout this book, Smith inspires me, not only through the courage of her personal expression in art and music, but also through the simplicity and sincerity of her words.  I believe it was this, as much as the circumstances of Mapplethorpe’s death in 1989, that brought on my sobbing and, afterwards, crying-headache, resonating still.

I asked George Rodrigue for a few words on success.  He thought for only a moment:

“Never believe what others write about you – no matter how great or how bad.”