Courage for Our Friends

After ten weeks in Houston, George Rodrigue and I returned today to New Orleans for a bittersweet homecoming, as we change our undesired summer’s routine, while leaving behind the people who shared our experience, the people we grew to love.

It’s weird, I said to George a few weeks into our summer, it’s not like we’re in Houston; it’s like we’re on some medical planet.

We saw some of them weekly, some daily.  We held in common personal struggles, each unique and similar at the same time, folks from around the world, some fighting for their lives, some saving lives, but all grounded, as we practiced together the rawness and realness of life outside of the expectations and obligations of normality.

“I’m recycling my life,” noted George, mid-summer, as we discussed our situation.  “I didn’t expect this new experience, and we should make as much of it as we can; because we’re all living in the moment, whatever that may be.” 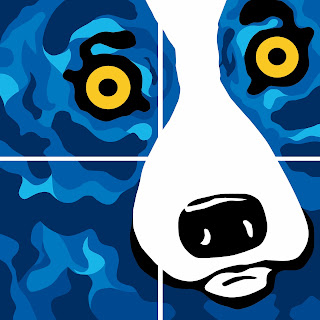 For George and me, this was an oddly welcome diversion from society, from fundraisers and dinner parties, from lectures and book signings, from the curiosity and gossip that accompany his fame.

(Note:  as if on cue, a tour group, on segways no less, pauses just now, as I write this, below the window of our Faubourg Marigny home; their guide tells of the great Louisiana artist within-)

Still, George gave impromptu art lessons this summer in the most unlikely of places.  Too weak to paint, he embraced these discussions, sharing not because he felt obligated, but because he sincerely misses painting, and because his new friends relate less to the celebrity and more to the man.

“Every great artist has taken a common thing and made people see it in a different way,” he explained earlier this week. 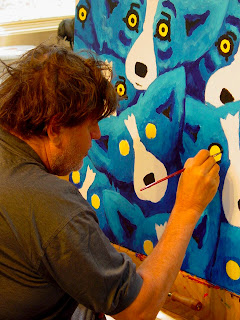 There are people, we all know them, who live life on the surface.  Maybe pretense is easier; maybe it follows from childhood defenses or a sense of self-preservation.  Some seek the cliché and “find themselves,” while others drift happily in a contrived and, perhaps safer, existence.

This summer, George Rodrigue and I experienced for the first time in our lives a Reality Planet (as opposed to Reality TV!), a place immersed in raw emotions, genuine concern, unabated fear, and tenacious courage.

I’ve never seen him turn down strawberries and cream, I whispered, distressed, to one new friend.  She nodded and smiled, because she knew.

....and her empathy, a welcome epidemic on this Reality Planet, comforted me.

Today, I can say with certainty that a healthy and strong George Rodrigue will return soon to his easel.  His ordeal began more than twenty years ago, when paint fumes and varnishes poisoned his body, and it culminated this summer with a near collapse of his spine followed by ten weeks of treatment.

“What does that mean?”

...he asked his doctor, who warned him of the flu-like side effects of one medication.  The doctor looked at me, confused.

He doesn’t know the flu, I explained.  He only knows big stuff, like polio and the plague.

George Rodrigue is stalwart in the face of difficult situations, and from the beginning I believed (because I had to) that, one way or another, he would beat his illness. 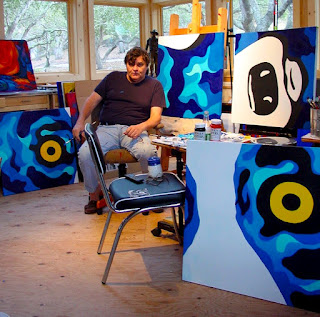 Both of us, as this summer ends, struggle with the good news far more than the bad.  We are trapped within our guilt, and many nights George cries, “Why me?,” as we think of our new friends.  We couldn’t bring ourselves to tell them while in Houston of a rare mutation, discovered just last week within his disease, treatable with a simple pill, and guaranteeing his recovery.

Folks talk of grace, karma, luck, fate, what have you – but none of this explains our situation; because George Rodrigue, the oldest in the room, will recover, while these young folks with young families still fight and fight and fight.

We are home for a short time, and we are changed.  How exactly remains to be seen.  But something happened…..something BIG.