Every once in a while a new silkscreen provokes a collective gasp--- from our staff, from collectors, even from George Rodrigue himself, as though surprised by his own artwork.  It first happened in 1991 with Starry, Starry Eyes, then in 1995 with Party Animal (a Mardi Gras tribute), and again in 2002 with over-sized motorcycle images called The Rat Pack, all original prints (not based on paintings) that caused a telephone-frenzy and sold out within weeks of release.

This month we see it happening once more, with the stunning new silkscreen, Cow Dogs. 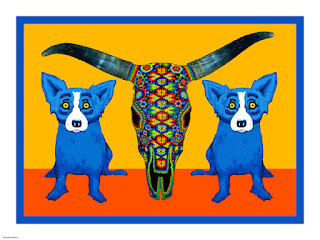 Rodrigue’s love of color, strong symmetrical design and iconography combine in an effective, even perfect, result.  I asked him about the symbolism, recalling Picasso’s Bulls and O’Keeffe’s Skulls.

“It seems like every artist throughout time interprets the heads or skulls of horses and cows.  The early cave drawings at Lascaux were renderings of some kind of four-legged animals with horns.  It’s a traditional fascination within art, inspiring creative interpretations, connecting man with animal.

“In the end, each artist puts his own indelible mark on basically the same subject matter.

“In this case I adapted a South American folk art beaded skull interpretation into my own design, connecting the cow’s skull not only to the American West, but also to Mesoamerican cultures and, through the Blue Dog and its loup-garou origins, the Cajuns.”

It was in 1993 that Rodrigue first incorporated these skulls into his designs, creating Moo-Cow Blues and Pueblo Puppies (click titles for images and related posts).  Like Cow Dogs, these artworks are symmetrically strong.  Yet they are prior to advancements in silkscreen colors and complexity, changes related to not only Rodrigue’s artistic growth within this medium, but also the progress of technology. 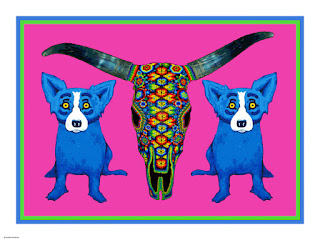 Although not his primary intention in this artwork, Rodrigue’s Cow Dogs suggest his lifelong fondness for Texas and the American West.  Coincidentally, Blue Dogs in Texas opened recently at the Amarillo Museum of Art (through October 14, 2012).

The exhibition features more than 100 paintings by George Rodrigue, such as the classic artworks pictured below:  The Immaculate Dog, Kiss Me, I’m Cajun, Paint Me Back Into Your Life, Wendy and Me, and a painted fiberglass cow, one of three within the exhibition, including the original version from the Chicago Cow Parade, painted by Rodrigue for Neiman Marcus, Michigan Avenue, in 1999 (detailed here; click title-links above for more on these paintings). 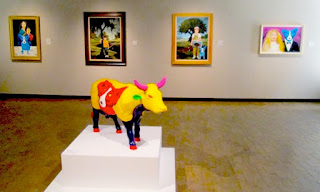 In a recent interview for Amarillo Magazine, Rodrigue describes the exhibition and his use of Texas iconography, such as the cow:

“Most of my museum exhibitions are retrospectives, because I want the audience to see how I painted forty years ago and how my artwork has progressed to the present.

“I think folks will be surprised at my ‘Louisiana Cowboys.’  It’s a subject I’ve approached many times over the years, and we’ve included a large selection of these paintings in this exhibition.  I hope people like them as much as I’ve enjoyed returning to this strong American theme in both my Cajun and Blue Dog paintings.

“I created some special works for this show where it’s obvious that the Blue Dog resides in Texas.  I try to do something that relates to some part of the culture or country in every exhibit, because the Blue Dog represents life today, and I can incorporate it in any situation I can imagine.  It’s blended well into Texas for a long time, probably second only to Louisiana.”


Although aware of the Amarillo exhibition, Rodrigue began his work on Cow Dogs long before Blue Dogs in Texas, playing for nearly a year with the design.  The timing is coincidental, and this particular print (unlike the recent Big Texan Sky) is less a Texas tribute than an art historical reference. 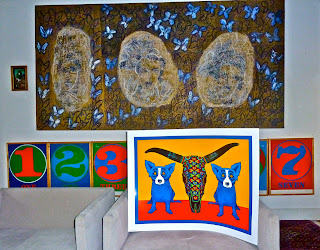 As I write this, I stare at Cow Dogs propped within our living room, where it seems at home with Hunt Slonem’s Carmen Mirandas and Robert Indiana’s Numbers, all strong, repetitive, classic imagery.

-with sincere thanks to the Amarillo Museum of Art and to Marney Robinson, Education Director of the George Rodrigue Foundation of the Arts, who curated and coordinated Blue Dogs in Texas;  I’m sure Marney agrees that this exhibition would not have been possible without her able assistants, Omar, Jessica, Douglas, Chris, Byron and Eldridge, who transported and installed artwork, working with enthusiasm ‘round the clock- 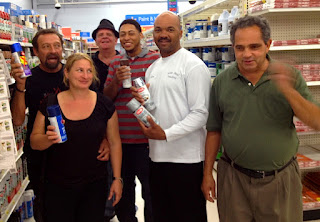 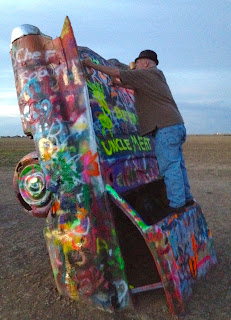 Posted by Wendy Rodrigue Magnus at 10:30 AM