Recently artist David Harouni painted a portrait of George Rodrigue, a special request by mutual friends Kerry and Tiffa Boutte of New Orleans.  Known for his powerful painted Heads, usually his own, Harouni traces his life’s journey, the imprints of memory and experience, layering and scraping paint in a process both concealing and revealing.

Born in Iran and raised in Iran and Israel, Harouni belies the label “New Orleans artist.”  By his own admission he is a nomad, inspired within this city yet, like Rodrigue, called to paint works that, although rooted in reality, focus heavily on imagination and symbolism.  Both Harouni and Rodrigue embrace the idea as gospel.

“Through my brush,” explains Harouni, “I paint the emotions, the challenges, the adventures, the failures, the successes, the weaknesses, the fears, the pride and the enormous strength of a wanderer, an exile.” 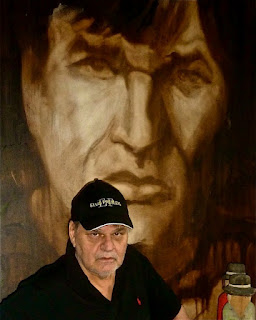 For me, after seeing George struggle with his health and spirit this summer, this painting represents his returning strength, as though Harouni scrapes away the broken body, revealing the warrior within.  George himself describes his recent experience as a “renaissance,” as life gives him a second chance, an eerily familiar feeling as he recalls his many months of seclusion while sick as a child with polio and again in the late 1980s with chemical hepatitis.

Although a portrait of Rodrigue, the painting is pure Harouni, the palimpsest* of his life and technique used to interpret another’s.  He paints the Blue Dog artist with deep, determined eyes, revealing his conviction and lack of fear in both his art and life.

“My subjects are all in solitude,” says Harouni.  “They are not laughing, crying, sad or happy.  They just are.” 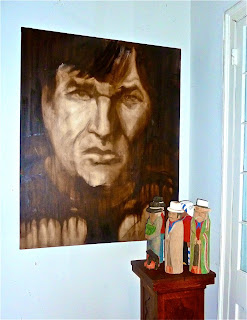 Harouni also paints Rodrigue like the great and powerful Oz, looking towards the future with an all-knowing, confident direction despite the isolation of his path.  In both Harouni’s painting and in reality, Rodrigue grows from a simple oak tree and makes it his own, expressing it in a way unlike any artist before him. 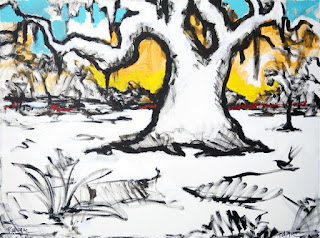 We hung Harouni’s Rodrigue in our Faubourg Marigny home this week, where it complements the Rodrigue Dogs, Indiana Numbers, and Slonem Butterflies in multiples throughout the room.  Since his earliest oak trees, Rodrigue gravitates towards strong, repeated imagery within both his art and collection.  This includes a number of Harouni heads, some giant kings, some small sculptures, featured prominently within our New Orleans house and George’s Carmel Studio.

(pictured, a grouping on our mantle, including a painted cast ‘box’ by Harouni; bronze and glass Heads by Harouni; Rodrigue’s Acadian Barnyard 1969; carved saints, 18th century; click photo to enlarge-) 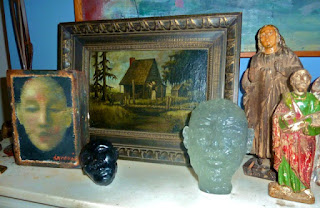 Harouni’s golds and reds remind me of Rembrandt, particularly his late self-portraits of the 1660s.  Like Harouni and Rodrigue, Rembrandt was self-made, selling his work without agents and often without a commission or guaranteed sale.  He also experimented with other mediums, such as printmaking.  He embraced the self-portrait throughout his life, seducing the viewer with his eyes. 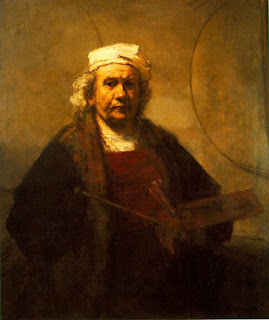 With Rembrandt’s years came layers of understanding, and his timeless gaze challenges today as much as it did 350 years ago.  His paintings pose questions forever, even beyond the intent that prompted nearly 100 self-portraits. 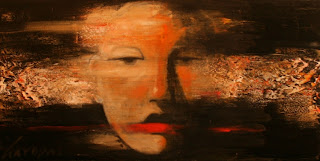 Perhaps the same can be said of Harouni (above), who writes,

“The successful immigrant is one who makes a decision, takes a strong step towards a goal, and makes what seemed unreachable a reality. He does not mourn what he left behind; he does not occupy himself with what has passed.

"He has faith in his strength and ability to overcome all obstacles in his path or at least has the courage to face them. He achieves fortitude through perseverance that renders daily obstacles meaningless to him.”

Rodrigue too, although native to America, can be described in this way, descended from an Acadian Saga, yet true to his ideas and focused, without hesitation, on his own direction in life and art. 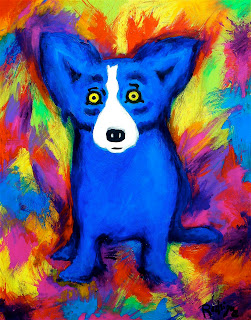 (pictured, I Am an Artist, 2006, acrylic on linen by George Rodrigue)

*palimpsest, defined by Harouni:  “…to draw and erase over and over again, having diverse layers or aspects apparent beneath the surface-" 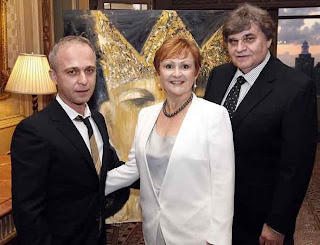 -pictured above:  David Harouni, Tiffa Boutte, George Rodrigue, and an original Harouni canvas, photographed by Daniel Erath of the Times-Picayune, March 28, 2012, at an evening benefiting the New Orleans Ballet Association-

-for more art and discussion, please join me on facebook or at Gambit Weekly-