George Rodrigue, known worldwide for his Blue Dog canvases, began painting in 1968 not bright-colored dogs but near-black trees.  His devotion to the Louisiana landscape remains an anchor within his art throughout forty-five years of Cajuns, Portraits and Blue Dogs, most of which include the now recognized Rodrigue Oak.

His landscapes today, although rooted in those early dark canvases, reveal a mature artist, confident in his craft.  Some include the familiar deep greens and browns; however none are so dark as his earliest works.  And some paintings essentially interchange his subjects, so that the strong design and color of a tree might as well be that of a dog.  Such is the case with Rodrigue’s Acrylic Landscapes.

I’ve written often, especially this summer, about Rodrigue’s lifesaving, yet challenging shift from oil to acrylic paint, a change he made permanent in the early 1990s.  The Blue Dog works well in the fast-drying intense acrylic colors.  However, Rodrigue’s Landscapes pose a greater challenge without the ability to blend the pigment in his established painterly style. 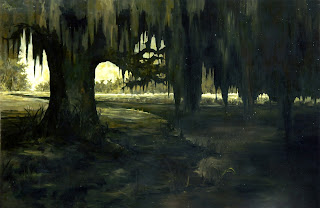 (pictured, Landscape, 1970, oil on canvas, 8x5 feet; view a series of typical Rodrigue landscapes from 1968 to present at this link)

His use of acrylic paint forced Rodrigue in new directions within his art.  Even though the latest water-based oil paints allow him today a revisit of his early style, such as in the recent painting below, his years with acrylic paint and the hundreds of canvases since his first oak trees result in paintings affected by the knowledge and confidence of his age and experience, as well as a palette now firmly devoted to color.

In his landscapes, no matter what the year, Rodrigue adheres to the basic rules he established for himself in the late 1960s.  Rejecting the spacious sky of traditional European-style paintings, he pushes a large oak to the front of his canvas, cropping the top of the tree so that the light shines in the distance and from beneath the branches.  With its hard edge and strong shape, his oak stands like a symbol of both his state and culture.

In addition, he rejects specific locales, painting the Louisiana in his head as opposed to the one outside.  In this way his paintings, no matter what the year or series, express a sense of mystery regarding time, place and, above all, meaning.

His challenge lies in working within these self-imposed parameters while developing his style.  This is most obvious within the Acrylic Landscapes, where the basic rules apply, yet the paintings communicate a contemporary statement akin to Rodrigue’s Blue Dog canvases.  He achieves this not only through his use of color, but also by adopting a sketch-like treatment using heavy, unblended pigment and large, loose brushstrokes. 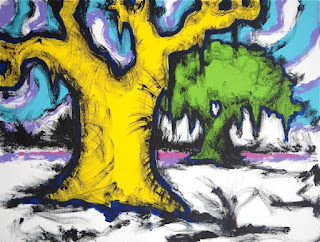 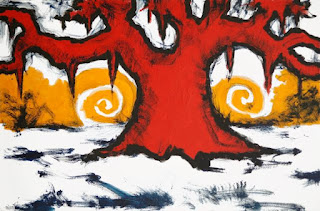 Because George is successful, it’s difficult sometimes for the rest of us to understand that he still experiments and grows within his art.  He returns to his Oak Tree repeatedly; however, like his long journey with the Blue Dog, his approach remains bound by his own evolution and interests.

“If it doesn’t make me happy, then I don’t paint it,” he says often.

It is this mindset that allows him to break with a certain style of painting without fearing the public’s reaction.

“The people who collect my early oaks won’t like these,” he noted…

…as he painted his first few Acrylic Landscapes, now a series of forty paintings, some with the Blue Dog and some without. 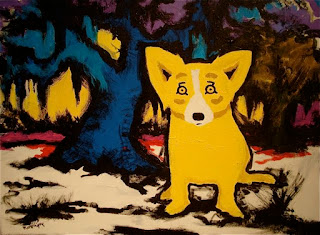 Yet George Rodrigue’s comment was not a lament or regret, but merely an observation, as he continues exploring with freedom, both within his mind and on his canvas.

-See Rodrigue’s Landscapes, both acrylic and oil, anytime at his galleries in New Orleans and Carmel; for information on availability and pricing email info@georgerodrigue.com

-For more art and discussion, please join me at Gambit Weekly or on facebook-

Posted by Wendy Rodrigue Magnus at 9:04 AM