During his forty-five year career, George Rodrigue has painted more than one hundred portraits, everything from his family to U.S. Presidents.  One series in particular, however, stands out as a select group of award-winning authors and scholars, painted for the Flora Levy Lecture Series at the University of Louisiana at Lafayette during the 1980s.

From October 1st to November 30th, 2012, nine of these portraits, including Walker Percy, Shirley Ann Grau and John Kennedy Toole, accompany a contemporary counterpart, a talent and image so strong that it holds its own among these literary giants.  The State Library of Louisiana boldly unveils for the first time George Rodrigue’s 6-foot portrait (2011) of his friend:  actor, writer, director and artist Sylvester Stallone. 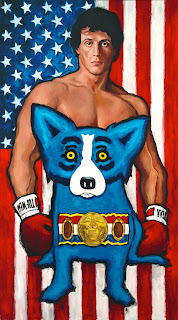 "I’m excited that after thirty years this collection of distinguished writers is on view. Since then I’ve painted numerous portraits but never a dedicated series such as this one, completed over the course of a decade. It was in 1984, in the middle of this series, that I painted the first Blue Dog.

"Sylvester Stallone’s portrait represents to me pop culture today.  Stallone invented Rocky; Toole invented Ignatius J. Reilly;* and I invented the Blue Dog.  All three are icons, ingrained in the fabric of our cultural history, one on the screen, one on the page, and one on the canvas.

"The early portraits represent classic literature, developing into pop culture through phenomena like The Moviegoer, All the King’s Men, and A Confederacy of Dunces.  Stallone’s contribution is a continuation of this tradition, combining a strong, iconic character with the medium of film.” -George Rodrigue 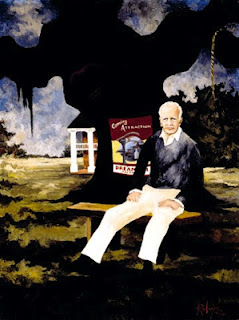 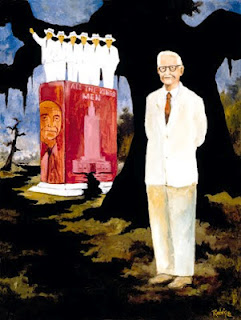 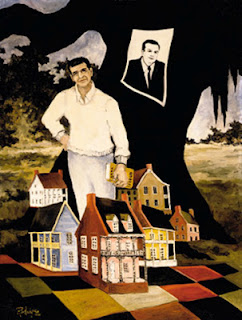 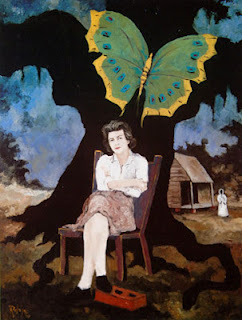 (pictured above, a selection of portraits from the Flora Levy Lecture Series; see the complete collection with histories at this link-)

Coinciding with this exhibition is the Louisiana Book Festival, now in its ninth year, free and open to the public with author lectures, book signings and workshops this October at the Louisiana State Capitol, the State Library of Louisiana, and surrounding grounds and buildings.

George and I look forward to this festival annually and participate this year with an afternoon of special events, most notably a personal tour with George Rodrigue of his portrait exhibition:

2:15 p.m. – 3:00 p.m.
State Library, Seminar Center
“Painting the Blue Dog:  A Program for All Ages” featuring George and Wendy Rodrigue and the George Rodrigue Foundation of the Arts

We hope to see you on October 27th for this special series of events, Rodrigue’s only scheduled public appearances this fall.  I also encourage you to visit the Louisiana Book Festival website and explore its featured authors and programming.  Some of our favorite participants include novelist Rick Bragg, cookbook author Marcelle Bienvenu and artist Lin Emery, noted for her kinetic sculpture installed within the reflective pool at the entrance to the New Orleans Museum of Art.

In addition, you’ll find both George and me in the audience (1:30 p.m., House Committee Room 3) when Ken Wells, author of the outstanding Meely LaBauve Series, joins Houma, Louisiana native Chris Cenac, Sr., M.D., F.A.C.S. for a discussion of Cenac’s lavish and well-researched illustrated history of Houma-Terrebonne, Eyes of an Eagle:  Jean-Pierre Cenac, Patriarch.

(Note:  I was so surprised and impressed by Eyes of an Eagle that I contributed a related article for Gambit Weekly, "Dancing the Shrimp," linked here-)

Finally, during this 200th year of Louisiana's Statehood, I was honored to contribute a handful of essays to the momentous tome A Unique Slant of Light:  The Bicentennial History of Art in Louisiana.  The 450 pages and color plates include 275 artists and essays, compiled and edited by Michael Sartisky, PhD and John R. Kemp of the Louisiana Endowment for the Humanities, and J. Richard Gruber, PhD, Director Emeritus of The Ogden Museum of Southern Art. 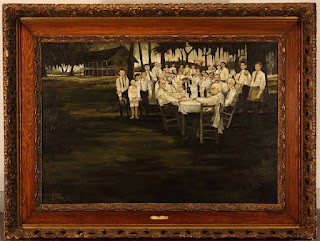 (pictured, Rodrigue’s Aioli Dinner, his best-known Cajun painting, appears within A Unique Slant of Light.  The original hangs on public view at The Ogden Museum of Southern Art.  Read the story behind this important painting here-)

At 3:15 p.m. you’ll find me running between Rodrigue’s book signing (Barnes & Noble tent) and Sartisky/Gruber’s discussion (House Committee Room 6) of the  history of Louisiana art.  Although the 2012 volume does not include the pop culture portrait of Sylvester Stallone, it does include Rodrigue’s Governor Earl K. Long and his Aioli Dinner (1971, above), a collection of portraits representing the rich cultural history of our state.

...and don’t forget:  Rocky, Percy and more on view at the State Library of Louisiana through November 30th 2012.

-for the personal story/account behind Rodrigue's painting of Walker Percy, visit here-

-for more art and discussion, please join me on facebook or at Gambit Weekly-

Posted by Wendy Rodrigue Magnus at 10:28 AM