I explained this week to a group of young students on the Florida Panhandle that he suffered from polio, a contagious disease affecting his ability to walk.  He couldn’t attend school or play outside. Imagine poor little George without a television (audience gasp)….or a computer….(bigger audience gasp)…..

“…or video games!” called a child from the back…

“…or electricity!” offered a wide-eyed girl on the front row.

I shared with the kids the famous story, how George’s mother brought him paint-by-number, which he turned over, using the colors and brushes to paint not the diagrammed Last Supper, but rather alligators and cowboys.  He formed tiny animals from modeling clay, arranging them on his nightstand for company.  And he decided right then, at age eight and having never seen an original painting by anyone other than himself, that he would be an artist. 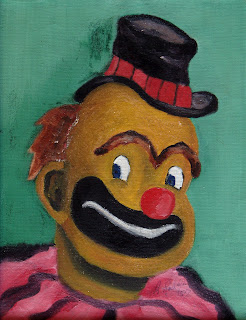 (pictured, Bozo the Clown, oil on board by George Rodrigue, 1957)

“When I was in grammar school and high school,” recalls George, “we had no art instruction at all.  At that time I didn’t realize that my drawing in class was a direct result of that absence.  That’s why I always sat in the back row.  I could draw what and when I wanted and was less likely to get caught by Coach Blanco, who threw me out of class many times for drawing.” 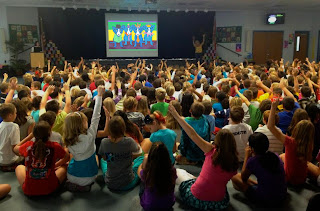 In addition to four school visits, this week’s outreach program, a partnership between the Mattie Kelly Arts Foundation (MKAF) and the George Rodrigue Foundation of the Arts (GRFA), included an adult presentation at the annual MKAF Arts Guild Luncheon.

Encouraged to share personal stories, I admitted the intimacy and honor that accompany modeling for George. I shared during the lecture only the tamest images from Bodies while introducing my father, one of the few men in attendance, to the hometown crowd.  It’s an education week, after all, and I’m sure I learned more from the creative kids during school visits than the adults learned from me during my exposé. 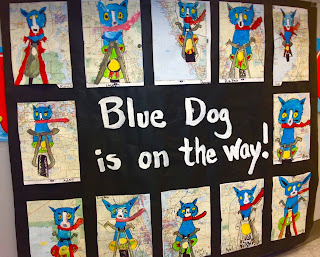 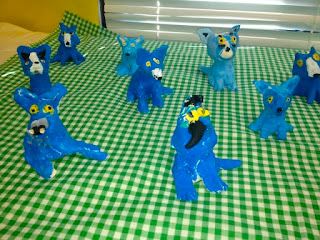 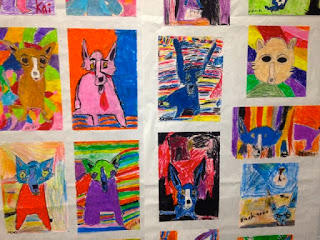 “It was so fun seeing childhood friends and their kids on school visits!” says Heather, who designs and manages our gallery website.  “I loved sharing our beautiful beaches with our ‘melanin-challenged’ friend Marney!  Last night I dreamt of white sand, green water, happy children and a raspberry filled donut.”

Marney Robinson (pictured below) is originally from Hobbs, New Mexico, and this was her first visit to the beach.  She dresses with unpredictable panache.  “This is Bridgette, the sexy librarian,” she clarified, describing her luncheon attire, complete with the antique bee pin on her shoulder.  She also enjoys a long-standing love of the arts, children, and donuts, sending us twice in three days to the famous Donut Hole, Destin. 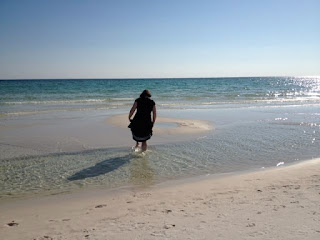 "I couldn't imagine a better first visit to the beautiful Emerald Coast!" says Marney.  "I was able to spend time with friends, meet new ones and once again see the excitement of students and adults for learning about George Rodrigue.  I loved that all of the children growing up on those amazing beaches could relate so well to a Cajun boy from the swamp.

"I will never forget my first dip in the waters of the Gulf of Mexico (while fully dressed; thanks Heather!) or those first steps in the white sand with two wonderful ladies.  The donuts were pretty great too!"

Miss Marney, as the kids call her, is Director of Education for the George Rodrigue Foundation of the Arts.  She organizes school visits, summer art camps, lesson plans, museum exhibitions and more.  George and I visited Marney and her family in the small desert town of Hobbs a few years ago after exploring Marfa, Texas, resulting in an artsy adventure with photos, linked here.

But it was the strangers (and I use that word very lightly), those folks from my public facebook page, an unguarded leap I took just one year ago, who surprised me the most.  Several drove in from Pensacola, New Orleans, and other Gulf South cities for the Arts Guild Lecture.   In most cases we met for the first time in person after sharing on-line for months, brought together, oddly enough, in my hometown.

(pictured:  George Rodrigue created the silkscreen Okaloosa Island in 2011 as a tribute to my hometown of Fort Walton Beach, Florida; details here-)

Although facebook, especially a public page, makes a person vulnerable, it can’t be worse than explaining giant nudes of oneself.  Like modeling for an artist, the rewards of facebook, blogging, and lectures are worth it, because in taking risks, we might find (or give!) something wonderful and/or exactly what we need, no matter how elusive and unexpected.

I share openly that in many ways it was these very folks, these facebook strangers, who preserved my sanity during a difficult summer.  We exchanged thoughts on George’s art and my blogs, a bit of normalcy for a few moments each day while I escaped the panic and responsibility accompanying his illness.  To my readers and facebook friends, especially those of you who attended this week and those of you I’ve yet to meet, thank you. 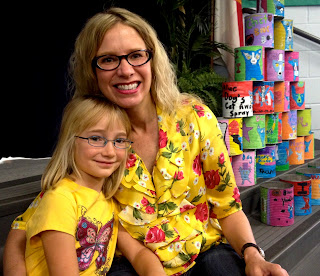 (pictured:  Even though we’d never met, I spied Darbi Fraser at Destin Elementary School right away, because she has her father’s eyes, my fellow 1985 graduate from Fort Walton Beach High School)

Finally, since we’re going home in this post, I leave you, for Marney, who grew up fifteen years behind me, an ‘80s classic, a sing-a-long on my high school runs between Fort Walton Beach and my second home of New Orleans, a song George Rodrigue heard, to my astonishment, for the first time this week and, to my even greater astonishment (as I learned on our drive home from our Florida Education Week), a staple in Marney Robinson’s car today-

-Meet George Rodrigue during his only public appearance this fall, an exhibition and series of events surrounding the Louisiana Book Festival, October 27, 2012; story and details here-

-And a big thank you to the Metropolitan Opera, which left me swooning this week with a comment on my story "Moonstruck, Madame Butterfly and the Mudlark"-