After many months indoors, George Rodrigue and I ease cautiously yet eagerly this fall into adventure.  Here in south Louisiana, diversion awaits in exploring small towns, riding an airboat, or simply walking on the nearest levee.

Our last adventure, some six months ago, took us past Lafayette to the city of Abbeville, Louisiana, where we followed nostalgia, visiting family in New Iberia and photographing shrimp boats at Delcambre. 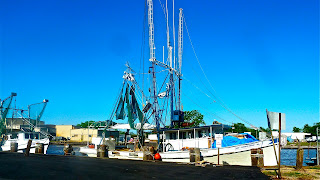 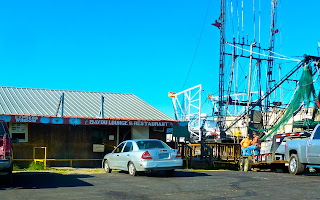 George longed to revisit the boats he painted as a young man, his first paintings upon his return from art school, now misplaced and mostly forgotten, superseded by the Rodrigue oaks that followed close behind.

(pictured, the only record of Rodrigue’s early paintings of shrimp boats, Delcambre, Louisiana, watercolor on paper, 1967-8; click photos to enlarge-) 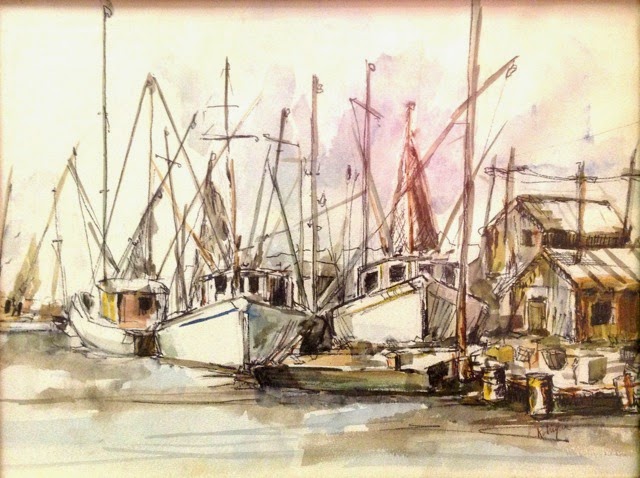 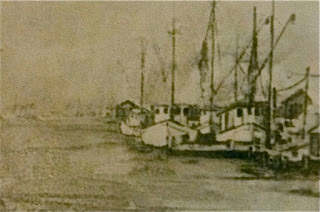 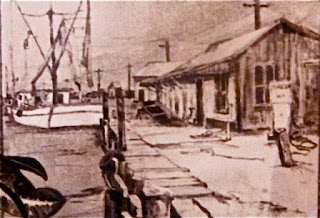 “Anytime my mama cooked shrimp, we didn’t just visit the grocery store,” explains George.  “Instead we rode thirty minutes from New Iberia to the boats at Delcambre.  At the time, there were three or four processing plants right on the docks, including the Dooleys, friends of our family. My mother refused to buy frozen shrimp.  It had to be fresh, straight off of the boat.

“When I returned from California and art school in 1967 and decided to paint Louisiana, my first idea was to paint the shrimp boats.  I photographed the docked boats at Delcambre.  There were hundreds of them.” 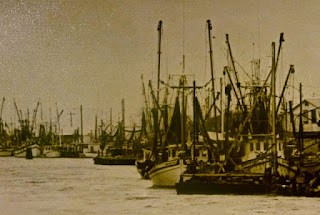 (pictured above and below, photographs by George Rodrigue, circa 1967; today only a handful of shrimp boats remain in Delcambre where once there were hundreds; click photos to enlarge) 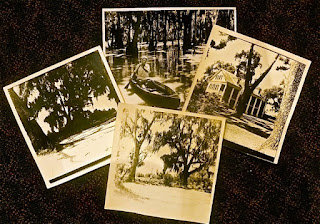 “I set up a dark room in a small closet at my mother’s house in New Iberia, where I developed the black-and-white film myself, making 8x10 photos of the boats.  I used the pictures to paint watercolors of the shrimping industry.”

Last weekend we again traced old ground, but this time towards the crabbing industry and Pierre Part, Louisiana, now famous as the home of Troy Landry and Swamp People.  More than twenty years since his last visit, George was curious about any changes brought on by the History Channel’s popular show. 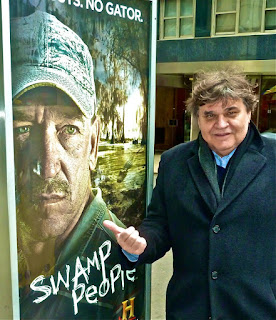 (pictured, George Rodrigue stands on the corner of 55th Street at Avenue of the Americas in New York City, March 2012)

Instead we found a tiny town, unchanged except, exclaimed George, “Where are the restaurants?!” as we circled the lake and drove the main drag five times dreaming of fresh seafood.  At last we spotted Landry’s, its only visible sign…well...invisible. 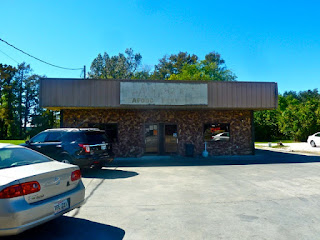 While pickin’ crabs, George and I exchanged childhood stories.  I recalled Granny’s step-ins suspended from the clothesline by crab claws during New Orleans family reunions; Dad swimming into Choctawhatchee Bay (Fort Walton Beach, FL) on a scavenger hunt for his crab trap, tied thirty feet from the dock and loaded with raw chicken and our soon-to-be dinner; and Great Aunt Lois from her trailer on the Tchoutacabouffa River (Biloxi, MS) jumping in fear as I whispered behind her, “Help me, help me” (ala The Fly), channeling the squirming crabs as she dropped them into the boiling water. 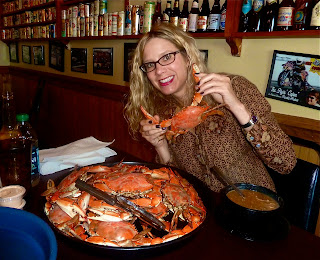 “Those crabs are confounding!” exclaimed my Memphis friend Jan after seeing our photos.  “I never understood how to eat those things.”

Surprised by her comments, I thought about the differences between areas of the South, so often lumped together as one stereotype by the national press. I grew up in the Florida Panhandle, and we consider ourselves the Deep South, akin to Alabama and Georgia, as though Disney World and Key West belong to a different state.

History favors Virginia as the true South, but any Gulf state local shakes their head with skepticism.  I didn’t think of New Orleans as the South until I moved here.  The accent may be more Brooklyn than drawl, but one ride past the plantations along River Road corrects the illusion.  And southwest Louisiana is a different place altogether:

“I only ate crabs once as a kid,” explained George.  “I went with my aunts to Pecan Island, where we walked in the water, feeling the crabs with our feet.”

“I wore my tennis shoes.  But my old aunts, they were tough, and they walked barefoot, collecting the crabs for that night’s feast.” 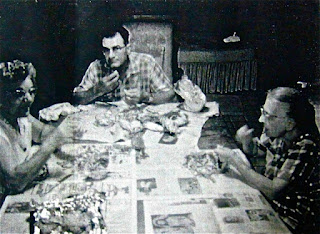 At our house today we forego crawfish, not because we don’t love them, but because George is highly allergic (although he does enjoy painting them).  Yet one of my best childhood memories is awaiting the Grela Parade on Mardi Gras Day in Gretna, eating crawfish from a plastic trashcan on the curb by 9:00 a.m.

The old “Help me” scene with Great Aunt Lois still haunts me, so you won’t find crabs scratching the underside of my gumbo pot's lid.  Boiled shrimp, however, is a staple at our house, as it was during my childhood when my mother, sister and I visited the boats at the Destin Wharf.

Today George and I buy from area shrimp boats when possible or, in a pinch, from Rouses, a wondrous dream of home-grown Louisiana seafood, sausage, seasonings and, because we Southerners simply can’t help ourselves, nostalgia.