In 1978 George Rodrigue tackled a 5x7 foot canvas, piecing together a group of women at a church quilting party, a common Acadian gathering during the 1940s and 1950s.  The ambitious project includes twenty figures, including a portrait of the painting’s new owner with her child, all gathered beneath Rodrigue’s typical Louisiana oaks. 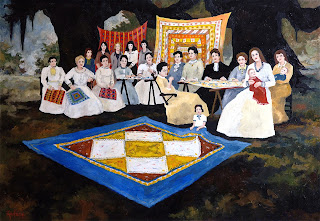 As with his other Cajun paintings, such as the Aioli Dinner and Mamou Riding Academy, the concept originates with a photograph or series of photographs (now lost), adjusted to suit his needs.  In the original image the figures sit indoors, perhaps within a fellowship hall or other meeting space, working on the quilts sold to benefit their church.

Rodrigue moves the women outside, contriving a setting so that the scene gains generalities of place and time, becoming anyone’s quilting party rather than a specific one.

The figures’ heads never the touch the sky, framed instead within oaks, bushes and quilts.  The children sit locked within the outline of adult women.  The landscape nurtures the traditions; the oaks stabilize the people; and the mothers protect the future.

Reinforcing this concept is Rodrigue’s choice of clothing, dressing most of the women in traditional frocks, while the back row stands in modern-day attire.  The painting rejects time, the figures floating and glowing like ghosts.  Without feet they melt into the landscape and each other as a unit, locked within both an artist’s design and a Cajun tradition.

“I first got the idea for a quilting painting,” explains Rodrigue, “when I saw quilts on the road between Alexandria and Monroe, Louisiana, as I visited clients in the 1970s.  On the small two-lane highway on the east side of the Red River, local quilters hung their quilts for sale on clothes lines strung between the oak trees in front of their homes.”

Quilting parties continue today not just in Louisiana but widely, as we’ve learned through gifts over the years, including a treasured compilation of Rodrigue images formed into a quilt by a group in South Carolina at the request of George’s friend, Linda Kuykendall, who donated her collection of t-shirts for the project. 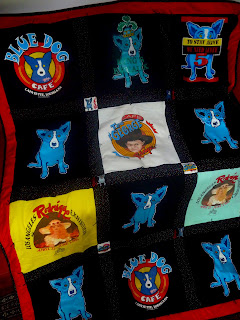 Pictured:  Although Rodrigue does not make Blue Dog t-shirts for sale, his friends and family enjoy his frequent tributes, such as…

…the Blue Dog Café, featuring a stylized version of the dog as the restaurant’s logo; “King’s Kreaux,” a bit of carnival fun referencing Rodrigue’s 1994 reign as King of the Krewe of Louisianians in Washington D.C.; “To Stay Alive We Need Levee 5,” the artist’s political plea in 2005 following Hurricane Katrina; “Café Tee George,” showing Rodrigue as a young boy, the logo of his Lafayette restaurant that burned in 1997; and Jolie Blonde, his 1974 classic painting advertising his 1988 Los Angeles exhibition….a show now famous not only because it was a sell-out exhibition, but also because it featured for the first time publicly Rodrigue's Blue Dog- 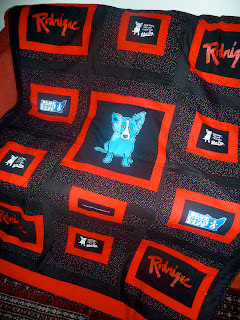 Pictured:  The quilt’s (and shirts’) reverse highlights Rodrigue’s famous red signature, as well as sayings like “Sometimes I Feel Like a Blue Dog.”

Recently, as George struggled with his illness this summer, The Community Prayer Quilters of Estes Park, Colorado quilted a gift to aid his healing through the traditional comfort of a quilt and power of prayer.

“My cousin Kay tells me,” explains George’s Lafayette friend Bertha Bernard, “that as they work on the quilt, they pray for the person for whom it’s intended.  When they finish, they hang the quilt in a church where the congregation prays individually for that person.  Kay is a member of the group, and they are called to make hundreds of quilts each year.” 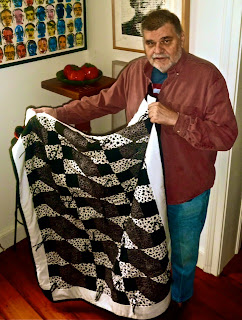 Pictured:  October 2012, A now healthy George Rodrigue holds the prayer quilt created and sent to him this summer by The Community Prayer Quilters of Estes Park, Colorado.

Early in our marriage, George and I collected several quilts during drives through the Texas Panhandle, specifically the stretch between Amarillo and Wichita Falls.  We stopped at the small towns and purchased heirlooms from area antique marts, seeking tradition in our young marriage through these found handmade treasures.  Although we ceased collecting long ago, the quilts remain, whether on beds, within trunks, or framed on the wall, destined within our family as a continuation of a cultural tradition, The Patchwork Gift.

-George Rodrigue and I hope to see you at the Louisiana Book Festival in Baton Rouge, October 27th, 2012; details here-

-see "Walker Percy, Sylvester Stallone and the Blue Dog" at The State Library of Louisiana through November 30, 2012; details here-

Posted by Wendy Rodrigue Magnus at 11:39 AM