A Cajun in Carmel

It was twenty-two years ago that artist George Rodrigue (b. 1944) opened his gallery in Carmel-by-the-Sea, California.  One of only two locations* in the country, the artist-owned Rodrigue Studio operates the same way today as it did years ago.  Despite Rodrigue’s increasing fame, he resists mass production and wholesaling, offering his works only through his galleries in Carmel and New Orleans (opened 1989).  The original paintings and silkscreens ship worldwide from these locations, each piece created by Rodrigue’s own hand.

In 2000, Rodrigue and his wife Wendy purchased a home in Mid-Valley, just inland of Carmel-by-the-Sea’s coastal fog.  Since that time, although he lives also in New Orleans, Louisiana, he paints ninety percent of his work amidst the sunshine and rolling hills of central California, an area close to his heart since his school days at the Art Center College of Design in Los Angeles in the mid-1960s. 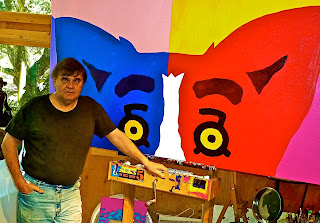 Born and raised in New Iberia, Louisiana, this Cajun first made a name for himself as a landscape and portrait artist.  Since 1969 his paintings of the Cajun culture, including posters for events such as the Breaux Bridge Crawfish Festival and Lafayette Mardi Gras, as well as five Louisiana Governor portraits including Kathleen Blanco and Bobby Jindal, and myths such as Evangeline and the loup-garou, endeared Rodrigue to south Louisiana residents long before a Blue Dog catapulted him to world-wide fame in the early 1990s. 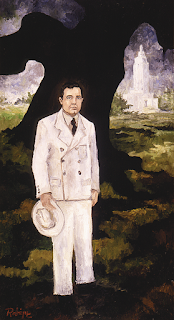 It was such a Cajun story, in fact, the loup-garou, that inspired the Blue Dog.  As a boy, Rodrigue’s mother used the legend like the bogie man, threatening,

“If you’re not good today, the loup-garou will eat you tonight!”

Rodrigue first painted this werewolf-like ghost dog in 1984 for a book of Louisiana ghost stories.  He used photographs of his dog Tiffany, who had already died, immortalizing her in shape and design not as a family pet, but rather as a Cajun-French legend said to lurk in cemeteries and sugarcane fields. 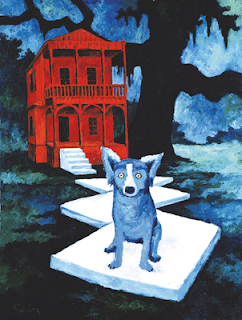 The strong image appealed to Rodrigue, and over time he changed the dog into a tighter shape, bluer color, and friendlier presence.  The early paintings’ red eyes turned yellow, and the grey-blue shade, first inspired by a blue moon and dark night sky, gradually became bolder and even electric, leaving little reminder of the Blue Dog’s ghoulish beginnings. 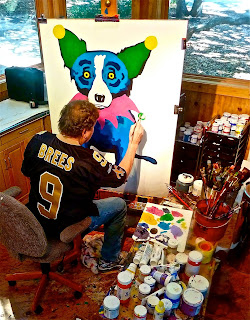 (pictured, Rodrigue at his easel, Carmel-by-the-Sea; click photo to enlarge-)

It was in Carmel that Rodrigue painted God Bless America on the night of September 11th 2001, raising $500,000 for the American Red Cross.  He painted his Hurricanes in California long before Hurricane Katrina ravaged his home state.  Selections from the seventy abstract round canvases swirl across the walls of museums nationwide, painted on the Monterey Peninsula yet symbolizing Mother Nature’s power as fed by the Gulf of Mexico and familiar to Rodrigue firsthand throughout his life. 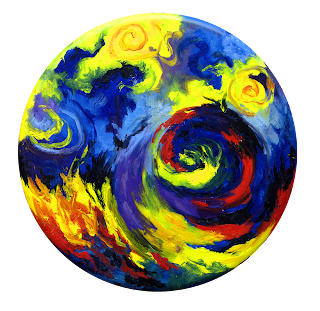 It was also in Carmel that Rodrigue conceived of and painted Bodies, a series of figurative works blending his love of the classical nude, the mystique of Louisiana’s aboveground cemeteries, and the symbolism of his own creation, the Blue Dog. 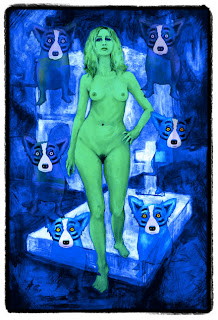 In 2013, for the first time in a decade, George Rodrigue devotes one year to working exclusively in California.  This commitment includes a major Rodrigue museum exhibition at the National Steinbeck Center in Salinas, as well as an ambitious partnership between the George Rodrigue Foundation of the Arts and the Arts Council for Monterey County, sharing art with thousands of central California students through painting demonstrations, lectures and school visits.

“For years I’ve given back to my home state of Louisiana,” says Rodrigue, “but California has given me just as much, and in 2013 I hope to return the favor.”

*Rodrigue also has a small location open by appointment in Lafayette, Louisiana

-note:  this post is from an upcoming article within De LUXE Carmel Magazine; for a related story see "A Cajun in California," linked here-

Posted by Wendy Rodrigue Magnus at 11:12 AM