For more on this process, see the post, "Looking for a Beach House," describing another print made in this way. 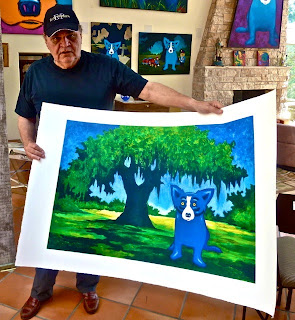 George Rodrigue’s newest painting, Blue Dog Oak, reunites his favorite subjects in acrylic colors blended adeptly, as though oils.  Unlike his dark oaks of the early 1970s, Rodrigue’s trees today glow with intense hues; yet the rules remain as the hard edges and almost puzzle-like structure control his composition. 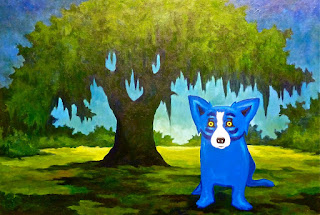 The Blue Dog stands framed, surrounded by a pattern of sky and shadowed ground, the stylized fur beneath its ears echoing the oak’s pointed moss.  Without negative spaces, the painting’s structure defies reality.  The spaces between the branches create interesting shapes, clearly a self-imposed challenge for the artist. 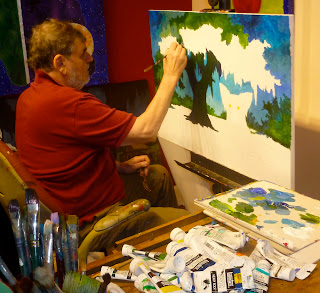 Rodrigue paints the dog as though it’s a Cajun person.  Glowing in blue rather than white, it stands strong with the tree.  For Rodrigue, the tree and dog represent his best friends in art, the shapes he made his own.  Over the years, they grow and change on his canvas just as he does in life.

As with his paintings of Cajun folk life, the light shines from beneath the tree.  For the Cajuns, this represents their hope, a longing to make a home for themselves in the swamps of southwest Louisiana following their deportment from Nova Scotia in 1755.

In recent paintings, however, Rodrigue paints the light not with the hope of the Cajun people, but rather with a general hope, a brighter future for all, as represented by the now omnipresent Blue Dog.

“People often ask me,” says Rodrigue, ‘Are you still painting oak trees?,’ and I reply, ‘Only when I want to.’  When I paint them today, it’s like visiting an old friend.  As with real friends, this reunion gives me pleasure.” 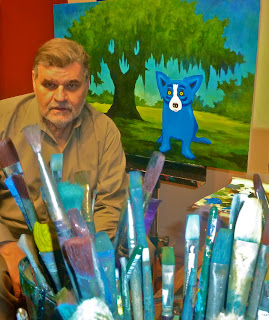 In Blue Dog Oak, Rodrigue reunites his established subjects on canvas, comfortable with their shapes and symbolism yet challenged, always, to create something unique, if not in subject, then in design and impression, as he seeks a finished painting titillating to his eye.

While exploring new directions in mixed media and chrome, it is Rodrigue’s old friends, the Oak Tree and Blue Dog, which propel him forward even as they, like Marilyn Monroe and Humphrey Bogart, connect him to the past. 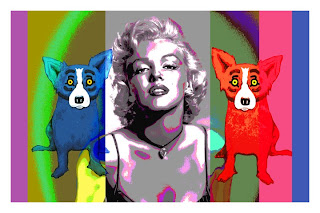 -for a related post, see “Sunshine and Love:  New Paintings”-