Update, 9/25/13:  Pictured below, George Rodrigue with his new version of the Creature, a one-of-a-kind piece on chrome, made for his private collection; click photo to enlarge- 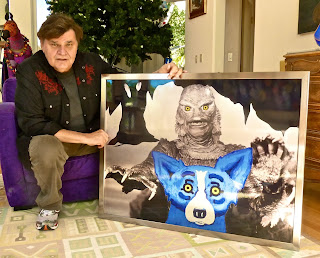 In the early 1950s, it was the movies more than television that made the biggest impact on mainstream American culture.  Today during school visits, I describe this environment to students, imagining a young George Rodrigue isolated from society during six months with polio in 1952.

“He was an only child, bed-ridden with a contagious disease,” I explain.  “His friends couldn’t visit, and his family had no television.”

Yet I receive little reaction, certainly not the gasp I expect, until I venture,

.....a statement prompting near-hysteria as today’s youngest generation absorbs the shock of life before the internet.

The point of the story, which I’ve written about here in detail, is that his mother cured his boredom with the Lone Ranger radio show, colored modeling clay, and a new 1950s invention called paint-by-number.  In other words, the crippling disease, the simple, pre-techno times, and a devoted parent sparked an artist’s destiny. 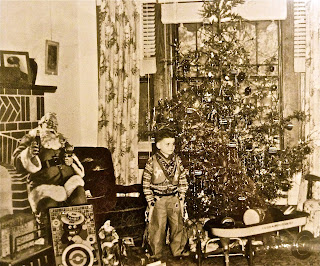 (pictured, George Rodrigue, New Iberia, 1950.  For more on this photo read the story, “The Ghost of Christmas Past”)

Yet just as the computer’s novelty surpassed the television, and the television altered the radio and movie experience, in the 1950s the double-feature and drive-in reigned, enchanting and inspiring all ages.

I remember my mom talking about double and even triple features at the Abalon Theater in Algiers on the West Bank of New Orleans.  She and my uncle purchased hot tamales from the corner vendor (a pre-cursor to Lucky Dogs, a Rodrigue favorite), sneaking them into the movie house.  They spent four to six hours on Sunday afternoons hiding from movie management and draping greasy tamale wrappers over the back row seats. 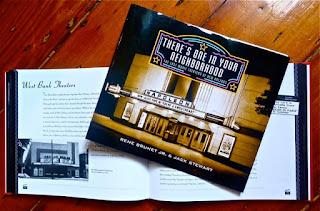 (Nurturing this nostalgia, Mardi Gras authority Arthur Hardy published recently There’s One In Your Neighborhood:  The Lost Movie Theaters of New Orleans, featuring the Abalon and others, a collection compiled and recorded by Rene Brunet Jr. and Jack Stewart, 2012; available for purchase here- )

But for George Rodrigue, the single greatest movie experience* of his life occurred in 1954 with the release of The Creature from the Black Lagoon.


“I was ten years old, and I saw the movie on a Wednesday at the Evangeline Theatre on Main Street in New Iberia,” recalls Rodrigue.  “I know it was a Wednesday because it was double-feature day for six cents.  I don’t remember the other movie, but the creature stayed in my mind.

“I liked it because it looks like it was filmed in Louisiana, even though it was filmed in Florida.  The creature appears half-alligator and half-man, living in the swamps.  I guess it was the first Louisiana ghost story I associated myself with, other than my mom’s scary threats of the loup-garou.” 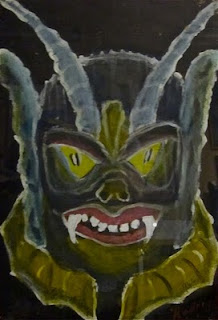 (pictured, The Creature from the Black Lagoon, painted by George Rodrigue, 1960)

“Several years later I was a Boy Scout at Camp Thistlethwaite in Washington, Louisiana and ran the craft section of the General Store.  In addition to sweeping up, I gave courses on painting, basket-weaving, and carving.”

You taught basket-weaving!? I interjected.

“We had all kinds of kits,” he explained, “including woodworking, beading and others.  I also sold cokes and candy.

“I had a small studio in the back of the store, and in my spare time I painted on cardboard.  My proudest moment was when the camp director asked me to paint a picture of his fishing camp.  I did it for free just so I could say that my artwork hung in his camp.”

So how does this tie in with The Creature from the Black Lagoon? I asked.

“One day I painted The Creature and hung it in the Thistlethwaite General Store.  It attracted lots of attention, but I wouldn’t sell it.”

People wanted to buy it?

“Sure….for more money than I made all summer in the store.  But it was mine,”

...he shrugged, unhooking the fifty-three year old painting from the wall beside his easel. 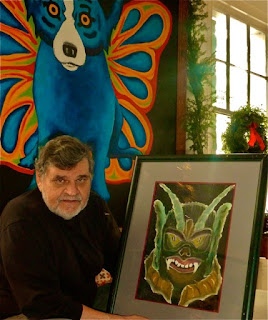 *not to be confused with “the single greatest movie ever made,” according to George Rodrigue:  The Searchers, starring John Wayne, 1956-

*Rodrigue went on to become an Eagle Scout in 1960.  In 2011 he received the Boy Scouts of America’s highest honor, Distinguished Eagle.  Read the story here-

-pictured above, George Rodrigue at home in New Orleans, January 2, 2013; although he kept his original Creature from the Black Lagoon, he went on to paint similar monsters on t-shirts, earning gas money in high school-

-Mike Scott spotlights this weekend’s TCM “black-and-white creature features,” including The Creature from the Black Lagoon for the Times-Picyune in a 1/2/13 story for the paper, linked here-