Most folks have seen Casablanca so many times that, unless one happened to visit a theater in 1942, we don’t remember our first encounter with Rick and Ilsa.  The film runs together as a nostalgic and romantic constant, a symbol for moviegoers everywhere of why we love the picture show.

In his newest series, Hollywood Stars, artist George Rodrigue pays tribute to the Golden Age of Hollywood with unique, large-scale works on chrome featuring stars of the Silver Screen. 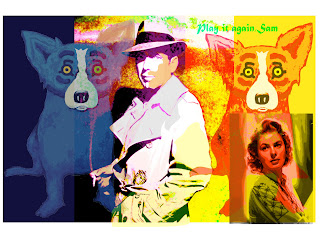 The Hollywood characters played by these stars are larger than life and impervious to time.  I thought of this recently as I read Kent Westmoreland’s detective novel Baronne Street* and slipped unwittingly into a Bogie accent as Burleigh Drummond, P.I. hunts the killer of his ex-girlfriend, Coco Robicheaux.  The setting is New Orleans, 2000, yet the flavor, regardless of the wheels, is Casablanca, 1940:

“The T-Bird was probably the only thing I really cared about and definitely the only commitment I’ve ever made.” –Westmoreland, Baronne Street, 2010

“These movie stars were under contract with major Hollywood Studios, and their images, in most cases, were managed and promoted as characters associated with their films.”

Rodrigue’s Play it again, Sam depicts Rick and Ilsa who, ironically, never utter that most famous of movie lines.

“I use the Blue Dog on either side of the figures, indicating one as their Hollywood image and the other as the real person behind the myth. Just as the dog has two sides, so do these actors, their true self and their screen self.

“As an example, Marilyn Monroe is the Blue Dog screen image, while Norma Jean is her Red Dog real self.” 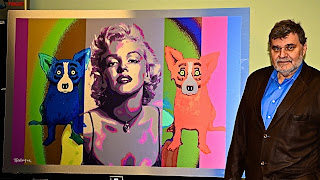 Hollywood Stars is a unique collection of artwork on metal, not to be confused with an edition.  Although based on the images within this post, Rodrigue makes each piece individually on chrome, altering the images slightly by hand using silver paint, so that no two are identical.  He then signs the finished works with his name and the notation “unique.” 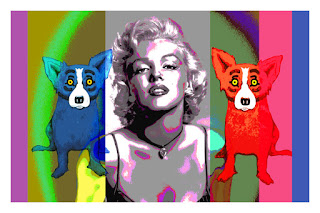 (pictured, Some Like It Hot, 2013 by George Rodrigue, archival ink on metal, 41x62 inches; note, a version of this image is also available as a silkscreen print; details here-)

After all these years, I should know better than to ask George about his favorite from this or any series.  Yet I wasn’t willing to accept his standard answer, “the painting I’m working on now,” and pushed him.

“Well, I wasn’t going to show you this ‘til it’s finished,” he grinned, “but I designed this one just for us.” 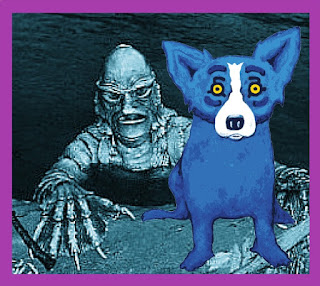 I guess he was inspired after last week’s post-

-for a related post see "Blue Dog at the Movies," linked here-

-for questions about Hollywood Stars, including price and availability, contact Rodrigue Studio-