Life Lessons and an Art Contest

George Rodrigue entered two art contests in his life and failed at both. By ‘failed,’ I'm not talking about losses, but more significant that he was disqualified or learned a hard lesson about cheating.

“Nothing in life is fair,” my mother used to say, and maybe she was right. But in the end perhaps that's not a bad thing. In George’s case his contest experiences taught him life lessons; they helped him understand people and, most important, that no one reaches their star by proxy. Either you work hard and make it on your own, or it doesn’t happen.

(pictured, although a different sort of art competition from the ones detailed in this post, George Rodrigue’s Honorable Mention from the Paris Salon, presented to the artist in 1974 on behalf of the French Government by Louisiana Governor Edwin Edwards, is among his proudest achievements; full story here-)

The first contest George entered was in 1954 at the Sears Roebuck Catalogue Store in New Iberia, Louisiana. In those days, according to George, the Sears store was nothing more than a small room with a row of catalogues and a woman behind the desk.
In an effort to widen its reputation beyond automobile tires, Sears hired actor Vincent Price as their cultural ambassador. He traveled across the country with art exhibitions for the store.  It was one of these shows, in Baton Rouge, that first exposed George a few years later to paintings by professional artists.
In keeping with this direction, the New Iberia store, too small for an exhibition, held an art contest for local grade school students. They produced a coloring sheet so that each child worked on the same image.

“I knew that no one colored better than me in my class,” says George. “I remember going to Sears with my mother to turn in my picture, and I remember staring at that tool set, knowing it would be mine.”

At age nine, recently recovered from polio, young George wanted nothing more than to win the child’s tool set offered as a prize. His mother, frugal since the Great Depression, was not fond of gifts, and if he didn’t win it, he knew he would never have one.
From an early age, if George wanted something beyond necessities such as food and clothing, it was up to him to buy it. By the time he was a teenager he earned money by working in his father’s tomb business and by selling his paintings of swamp monsters.
He also took the occasional portrait commission, until 1959, when the director of the local funeral home, George Burgess, refused to pay the agreed-upon price of fifty dollars.  For George, at age fifteen, this was a hard lesson learned, and the Burgess portrait hangs in his studio today, lest he forget. 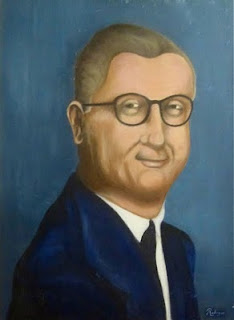 (pictured, Portrait of Funeral Director George Burgess by George Rodrigue, 1959; collection of the artist)
He didn’t win the tool set. Rather, the boy who sat behind him in the third grade and who “couldn’t color at all” took it home. His aunt, the manager at the Sears Roebuck Catalogue Store and the contest's only judge, presented him with the prize.
Ten years later, in his early twenties, George Rodrigue entered his second and final art contest. It was in Morgan City, Louisiana, where he was disqualified from the start because the contest’s organizers thought he passed off antique landscape paintings as his own.   In other words, they assumed he cheated.
(pictured, George Rodrigue with a typical Rodrigue Landscape, 1971, Lafayette, Louisiana) 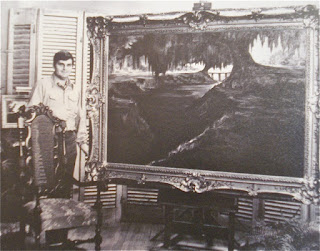 It’s ironic, given these unpleasant experiences, that George launched in 2009, through the George Rodrigue Foundation of the Arts (GRFA), an art contest for Louisiana high school students. With sixteen winners and $35,000 in scholarship awards, the first contest was an enormous success, as rewarding for George, I believe, as for the winners.  As a result, the now annual contest includes higher scholarships and cash awards, attracting hundreds of entries from across the state. 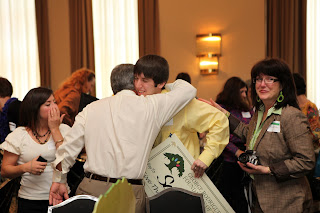 (pictured, Sean Hicks of Hackberry, Louisiana, the 2010 First Place Winner of the Rodrigue Foundation Art Contest)
Remembering the rigged Sears contest, he avoids judging, ensuring fairness as much as possible with guest judges and nameless entries. Remembering his own academic struggles, he eschews G.P.A. requirements, test scores, and declared majors, hoping all juniors and seniors in Louisiana, regardless of their grades, will find confidence in their creative abilities and give this competition a try.
George visits with the winners at a luncheon in their honor and follows their progress during the year, hosting an art show of their works within our foundation’s Education Center.   The exhibition travels to several venues throughout the state, including in the past the Louisiana Governor’s Mansion in Baton Rouge, the Ogden Museum of Southern Art in New Orleans, and the Masur Museum in Monroe. 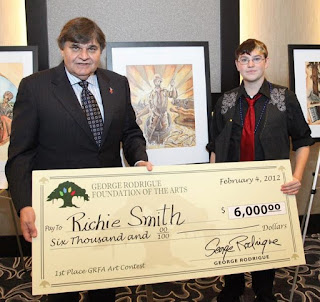 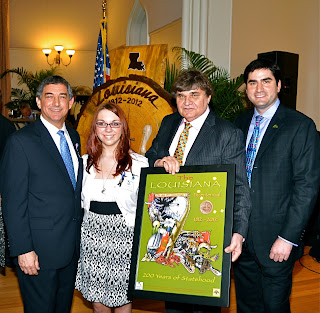 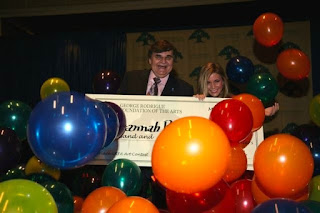 The 2013 GRFA Art Contest celebrates “Louisiana’s Culinary Heritage,” as participants create food-related artwork.  Partnering with the Louisiana Restaurant Association Education Foundation (LRAEF), the contest culminates with presentations of $45,000 in college scholarships and awards and, unique to this year, a Fall 2013 cookbook featuring winning entries alongside recipes from Louisiana's greatest chefs.

“Our beloved Creole and Cajun culinary traditions encourage a vibrant restaurant industry, impacting our state’s economy with jobs and tourism. With GRFA and the Louisiana Restaurant Association, I invite Louisiana’s high school juniors and seniors to create a work of art representing our state’s unique culinary heritage while honoring its festivals, dishes and local ingredients.”

George and I look forward to meeting this year’s winners at the GRFA Art Contest Awards Luncheon at the Sheraton New Orleans Hotel, March 23, 2013.  For George, each year grows in meaning, as we attract more entrants and increase scholarship dollars.  In addition, the school with the most entries receives one year’s worth of art supplies through George’s Art Closet, further encouraging participation.

This is a long way from those early art contests when young George Rodrigue learned hard lessons, now put to use in helping students.

“It gives me a lot of joy,” says George, “to sponsor in Louisiana a statewide art contest, because it provides excitement and goals for young artists.  It’s a friendly competition that, should they win, not only helps pay for their college, but also boosts their confidence.”

-deadline for entries for the 2013 George Rodrigue Foundation of the Arts (GRFA) Art Contest is February 20, 2013; details here-

-see the 2012 GRFA Art Contest Winning Entries at The Ogden Museum of Southern Art through February 17, 2013; or view the artworks on-line at this link-

-see the 2013 GRFA Art Contest Winning Entries at the Old Post Office Museum, Winnsboro, LA, on view with George Rodrigue's Saga of the Acadians and Blue Dog paintings from the collection of the New Orleans Museum of Art, March 28 to May 6, 2013-

-visit the website for the George Rodrigue Foundation of the Arts-